Slovakia's new Ambassador to Washington: "We have to work like workaholics to catch up" after Mečiar

Martin Bútora does not leave for his new post - Slovakia's Ambassador to the United States - until February 25, but already his schedule is so hectic that his glasses seem permanently fogged.
Bútora's background is in the academic field and the third sector. He is president of the Institute of Public Affairs in Bratislava, an independent public policy research institute estabished in 1997. In 1989, he was a founder of the Public Against Violence, the leading Slovak force in the Velvet Revolution. From 1990 to 1992, he served as an advisor on human rights to Czechoslovak president Václav Havel. 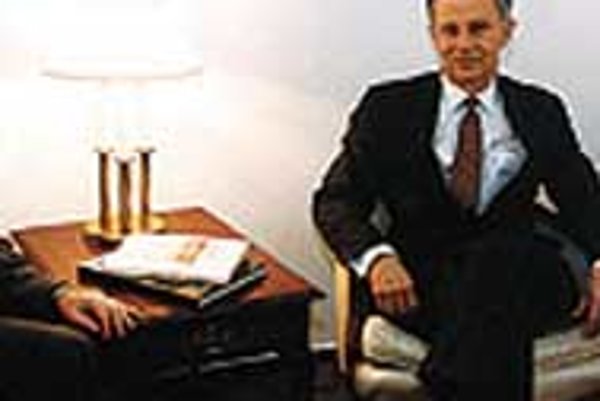 Font size:A-|A+  Comments disabled
Martin Bútora does not leave for his new post - Slovakia's Ambassador to the United States - until February 25, but already his schedule is so hectic that his glasses seem permanently fogged.

Bútora's background is in the academic field and the third sector. He is president of the Institute of Public Affairs in Bratislava, an independent public policy research institute estabished in 1997. In 1989, he was a founder of the Public Against Violence, the leading Slovak force in the Velvet Revolution. From 1990 to 1992, he served as an advisor on human rights to Czechoslovak president Václav Havel.

Bútora has not only worked as an associate professor of sociology in both Prague and Trnava, Slovakia, but he also was an Executive Education Fellow at Princeton University's Woodrow Wilson School of Public and International Affairs in 1993-94.

The Slovak Spectator spoke with Martin Bútora as he was catching his breath after a visit to Trenčín on February 10.

The Slovak Spectator (TSS): You are a former sociology professor. Why were you chosen for such an important post rather than a career diplomat?

Martin Bútora (MB): That is a question for the people who chose me. My guess is that someone like me who is at least relatively known in the US in a community like the academic community, think tanks, NGO's, some political actors, that's an asset. I spent an academic year in America in 1993 and 1994, and to some of my friends and colleagues, it may have looked like I was preparing for a diplomatic career, you know, with all the travelling and lecturing and meeting people in the US I was doing from 1993 to 1994, but it was simply about keeping regular contacts.

Maybe my selection also had something to do with the fact that I was from the beginning practically and spiritually connected to the changes after 1989.

TSS: Foreign Minister Eduard Kukan said when he visited Washington in January that the revolution that began in November 1989 only finished last year with the September elections. You were there in the beginning as one of the founders of the first post-communist party - the Public Against Violence. Do you agree with Kukan's statement?

MB: My wife [sociologist Zora Bútorová] and I wrote an article for the January 1999 issue of the Journal of Democracy in which we attempted to use the Slovak national anthem ['Lightning Over the Tatras'] as a metaphor. Our anthem is a picturesque song which comes from the 19th century, and the first part of it is about the awakening of the Slovak nation, of Sleeping Beauty, I would say. It corresponds very closely to the achievement of Slovak nationhood on January 1, 1993, an event which fulfilled some of our deepest ambitions and aspirations.

I have felt, however, at public gatherings and demonstrations over the past several years, that people have gradually started to think along the lines of the second part of the national anthem, which was relatively unknown to them before. What they perceived was that it was about not so much a national awakening as a democratic awakening. It was no longer about Sleeping Beauty awakening from a national or ethnic viewpoint - this was already solved by the establishement of the Slovak Republic - but from a democratic one. So yes, from this point of view, the 1989 revolution was unfinished.

TSS: What would you like to achieve in Washington during your posting there?

MB: I think no ambassador is able to achieve more than his government achieves - his accomplishments can only be a reflection of domestic achievements.

Having said that, I would like to contribute to re-introducing Slovakia on the political map of key political actors in Washington and the US, bearing in mind of course that there are 180 embassies in Washington, many of which represent small countries. I would like to try and convince them that Slovakia is a reliable, serious and determined partner of western countries as a whole and the US in particular.

However, the previous period [under former Prime Minister Vladimír Mečiar] was unfortunately a non-standard one, and as a consequence we have to work like workaholics to catch up.

TSS: But surely the government wants to do more than just put Slovakia on the map?

MB: Yes, of course. I'm convinced this country can offer some very concrete and positive contributions to endorsing and promoting security not only in the central European region, but also outside of it. The treaty which was signed on February 9 between the US and Slovak Air Forces on bilateral co-operation is another concrete example of how this country can contribute to the better functioning of western security alliances.

If you look at the map, to my eyes at least, the idea of the Visegrad Four [Slovakia, Hungary, Poland and the Czech Republic] is not just the dream of some intellectuals - from the point of view of both history and recent developments, in any region as critical as central Europe, if there are not simultaneous and equal developments, if there are some countries which lag far behind, sooner or later it has serious consequences. From this point of view, Slovakia has to catch up with its neighbours.

TSS: How much are NATO's concerns about Slovakia a matter of political reform, and how much do they relate to worries about security at the Slovak Ministries of Foreign Affairs and Defence? Is the US pressing for guarantees that secrets won't be passed on to Russia?

MB: I can imagine the US brings up and will bring up this issue, but I expect the government will respond very flexibly and very actively. I think it's quite normal that NATO wants to be 100% covered from the security point of view, and not just in the case of Slovakia but also the Czech Republic, Poland and Hungary. But I think both the Foreign Minister and the Minister of Defence are well aware of this and do their best to meet the criteria. Not only the political criteria - that's over, more or less - but also the criteria which are now on the agenda, and these are precisely those security issues which you mentioned.

TSS: Is Slovakia going to be admitted into NATO any time in the foreseeable future? Do you think the government's expectations have changed since October?

MB: I think 'some time in the foreseeable future' would be a good way of putting it. If I could put this metaphorically, I think this country should do its best to behave as if it were already a member of both the EU and NATO.

It's good and normal that the government is now more realistic about what can be achieved. We now have a marathon runner heading the government, so it symbolises something like patience.

TSS: In January a group of US Members of Congress visited Slovakia, among whom was John Mica, a Republican Congressman of Slovak descent who has been a major force supporting Slovakia at the Congressional level. Do you know each other? What kind of relations do you have with the Slovak community in the US?

MB: I spoke to Mr. Mica during his visit, and I think he is very serious in his support for and dedication to this country. But not only him - I understood from my meetings with other Congressmen that all of them are prepared to create something like a 'Slovak caucus'. The Poles have well-developed relations because of their community in America, and the same is true of the Hungarians and so on. I think we will have to work at building our potential supporters in Congress, to seek American friends and allies of Slovakia.

I would like to continue in the excellent work of my predecessor, Ambassador Lichardus, with the Slovak community in the US, and I would particularly like to address third generation Slovaks. Two sisters of my father emigrated in 1919 and 1921, so I now have a lot of cousins and nephews and so on over there. My impression during my stay in Princeton in 1993-1994 and elsewhere was that it's always the third generation which returns to its roots and tries to seek contacts in Slovakia, and I hope this will be a new prospect for Slovakia in 1999.