Prohibited from working and watched by a guard, 26 unwanted employees of the state-owned Slovak Television (STV) station have been holed up since January 4 at the top of the firm's 28-floor building. They have been told they must live out their work hours in the airless room until their contracts terminate some time in the next three months.
"We are being discriminated against, and the state under which we're kept here is inhuman," said Roman Mistrík, spokesman of the group and former deputy chief-editor of the STV newsroom. 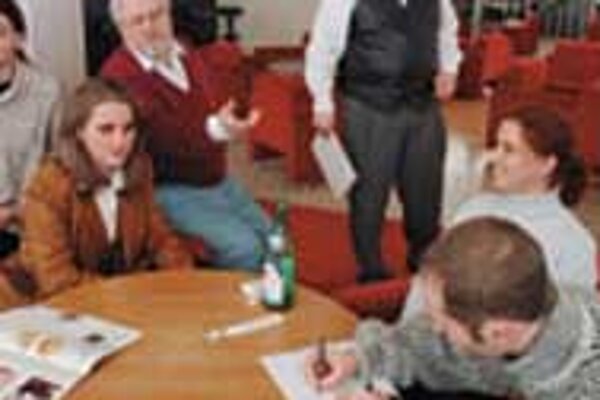 Font size:A-|A+0
Prohibited from working and watched by a guard, 26 unwanted employees of the state-owned Slovak Television (STV) station have been holed up since January 4 at the top of the firm's 28-floor building. They have been told they must live out their work hours in the airless room until their contracts terminate some time in the next three months.

"We are being discriminated against, and the state under which we're kept here is inhuman," said Roman Mistrík, spokesman of the group and former deputy chief-editor of the STV newsroom.

The group has appealed in writing to the U.S. Congress and to Slovakia's General Prosecutor, claiming their human rights are being violated. But the newly appointed STV management, which is responsible for confining the former employees, denies their rights allegations and says the labour code has been strictly followed.

On December 30, STV general director Milan Materák turned the building's former top-floor cafeteria into a what he called a "Centre for Settling Legal Arrangements with Personnel." He then issued orders that employees whose positions had been cancelled during a personnel reshuffle at the 2,500-strong media giant be confined there during work hours.

Most of the sacked staff had joined STV as journalists under the reign of former general director Igor Kubiš, and were widely blamed for turning the public station into a propaganda machine for the former government of Prime Minister Vladimír Mečiar.

New STV director Materák explained that the pro-Mečiar group had had to be segregated because after receiving their notices of dismissal, "some of them mentally terrorized and intimidated other staff." Slovak law says that employees must be given up to four months notice, Materák said, and the station could not afford to have abusive workers wandering the halls for that long.

According to STV Organisation and Commercial Director Ľubomír Jarjabka, some of the dismissed employees in one case even tried to thwart the preparation of an evening programme a few minutes before it was to be broadcast. "We discovered that one of the former employees repeatedly entered the [STV] building under a fake pass, and went around news offices kicking doors and verbally menacing the staff," Jarjabka said at a January 27 press conference.

"Do those STV employees who were behind the moral devastation of this institution before parliamentary elections in September now have the right to present themselves as dissidents?" Jarjabka asked.

Jarjabka also mentioned that the wages that STV obliged to pay the unwanted staff in accordance with the Slovak Labour Code - three months salary, on average - would exceed 3 million Sk ($ 82,000). "It's because some of these employees were illegally given performance bonuses during elections, which in many cases came to more than 100,000 Sk ($ 2,800)," Jarjabka said.

Despite these powerful arguments, Slovak media organisations said the current STV management's tactics were inappropriate. Ján Füle, chairman of the Syndicate of Slovak Journalists, an independent professional organization, said that "the [Materák] solution lowers the dignity of both sides, but unfortunately the Labour Code allows for such means to be applied, which is not good."

The confined journalists have made good use of the media and international rights organisations to plead their cause. On January 12, the group addressed a letter to the U.S. Congress delegation that visited Slovakia, in which they claimed that their human rights were being violated and in which they compared their situation to 'concentration camp' conditions. "We used the words 'concentration camp,' but we never meant a Nazi-type camp," amended Mistrík.

As the weeks have passed, the 'Case of the 28th Floor' has surfaced in international settings at embarrassing moments for the Slovak cabinet. During his January 23-24 visit to Washington, D.C., Slovak Foreign Minister Eduard Kukan was asked to explain the STV situation by the American press, which had been tipped off by the Washington-based correspondent of the Mečiar-friendly Slovenská Republika daily paper. The daily's Júlia Ondrejčeková filed an official complaint with the American Committee to Protect Journalists about discrimination against journalists at STV.

"The way the issue was dealt with sent an incredibly bad signal abroad," said Miloš Mistrík, a member of STV Council, the station's supervisory body. "It proves that the new ruling coalition has gaps in its understanding of public media," Mistrík said.

STV Council chairman Štefan Bučko told The Slovak Spectator that he had tried to persuade Materák's management to release the employees. "They could have dealt with the dismissals in a more elegant way," Bučko said, adding that it was beyond the council's power to solve personnel issues at STV. "The fact is that these employees themselves made their departures a dishonourable affair, but I still don't like the way they're being treated," Bučko said.

At a January 13 special meeting of the Parliamentary Human and Minority Rights Committee, opposition deputies with Mečiar's HZDS party accused the STV leadership of political persecution of employees who held different opinions. "There were no such rules even in the Communist regime," said HZDS deputy Roman Hofbauer.

But coalition politicians argue that no one's rights have been violated at STV. "I don't know about any rights violations," said Deputy Prime Minister Pavol Hamžík. "I only know that certain STV journalists violated the election law before the [September] parliamentary elections."