The January 28 passage of a long-awaited package of economic austerity measures over the objections of Slovaki unions has triggered some nasty doubts among many union leaders as to the intentions of the cabinet - will it keep faith with its labour constituency, they ask, or will the government ditch unions in its headlong pursuit of investment capital?
"If it came down to a choice between unions and a foreign investor which refused to deal with unions, I believe this government would side with the investor," said Jozef Kollár, vice president of the Confederation of Slovak Unions, the KOZ. 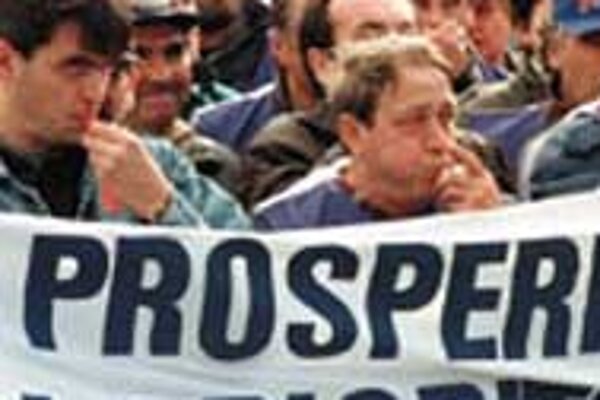 Font size:A-|A+  Comments disabled
The January 28 passage of a long-awaited package of economic austerity measures over the objections of Slovaki unions has triggered some nasty doubts among many union leaders as to the intentions of the cabinet - will it keep faith with its labour constituency, they ask, or will the government ditch unions in its headlong pursuit of investment capital?

"If it came down to a choice between unions and a foreign investor which refused to deal with unions, I believe this government would side with the investor," said Jozef Kollár, vice president of the Confederation of Slovak Unions, the KOZ.

The cabinet's January 28 move came on the heels of a January 19 law on Health Insurance rammed through parliament without labour approval.

"The government definitely failed in this case," said Darina Malová, Associate Professor of political science with Comenius University in Bratislava. Malová called the government decision to ignore labour in shaping the health insurance law short-sighted. "If the issue had been negotiated with unions, unionists could have helped to push it through and explain the necessity of planned reforms directly to the workers. Thus, the cabinet would have gained support straight from the workers," Malová maintained.

By itself, the passage of a law or even the economic package without union support would not have unduly troubled labour. However, in taking these decisions alone, the government violated the terms of an unwritten 'Tripartite Agreement' struck between the cabinet, unions and the Association of Slovak Employers following September elections.

The Agreement was interpreted as a sign of the resolve of the new Slovak government to restart a dialogue between the state and its 'social partners' - labour and capital - after its interruption by the previous government of Vladimír Mečiar on July 14, 1997. Malová said the willingness of the new cabinet to ignore its social partners so soon after publicly embracing them was an ominous reminder of the past.

"It was the unions that contributed to the fall of Mečiar in Slovakia during the election campaign," she said, "and thus indirectly helped the present coalition to win the elections. But now they have been shoved aside. So how much better is this government from the Mečiar government if they do the same things that the previous cabinet did?"

Ivan Mikloš, Deputy Prime Minister for Economy, told the independent SITA news agency that the violation of the Tripartite Agreement on the 19th had resulted from the cabinet's hectic schedule, and had not presaged any return to the heavy-handed ways of the past. "There will always be tensions between social partners, but it is important that these are not caused by organisational shortcomings," he said.

However, Prime Minister Mikuláš Dzurinda was less diplomatic following his cabinet's approval of the austerity package. "We are interested in permanent dialogue between cabinet, unions and employers," he told SITA, "but the government is defending its turf."

Kollár called Dzurinda's attitude destructive. "If the government isn't able to communicate with unions, this will only harm society," he said.

Some members of ruling coalition parties said they were also uncomfortable with the short shrift unions received.

But Mesiarik also said the growing distance between the government and its former union supporters was part of a natural process. While the current ruling parties were in opposition, he said, they were accustomed to cooperate in fighting a common enemy - Mečiar. But now that their political allies were in government, labour no longer found them so willing to lend an ear to narrow union interests.

"I myself experienced that phenomenon several times," Mesiarik said. "As a union leader, I co-operated with the former opposition before elections, and I kind of misused it when asking them to support us by passing some laws if they win. But now this support [from the former political allies to the unions] is not coming."

Part of the fear of labour is that in its declared committment to attracting foreign investment, the cabinet is liable to sacrifice the rights and interests of unions.

Malová said that cabinet was unlikely to dump labour, and that in any case, it was not likely to face great anti-union pressure from modern multinationals. The attitude of any foreign investor towards unions, she said, depended on the origin of the new capital. "European companies, as well as huge American corporations, are used to having unions around. What they might not like, however, is the fact that the Tripartite Agreement exists on a national level [in Slovakia], because it sets the minimal wage and other restrictions unpopular to employers."

Asian investors, Malová said, might have a far less tolerant stance towards labour.

Mesiarík, on the other hand, said that if Slovak labour chose to organise, no corporation could stop them. "We have our constitution here and we have a law on free association. Everybody has that right, and nobody can stop them from enjoying it."

Malová said that another factor supporting the continued existence of unions in Slovakia were the European Union's pro-labour policies. "The EU keeps up a strong social dialogue with workers. So it seems that unions will remain a strong element in Europe as well as in our country," Malová concluded.

For now, all three 'social partners' have their work cut out for them coming to any agreement at all. The Tripartite Agreement forms the basis of a Council for Economic and Social Partnership that meets whenever laws are to be approved. The Council's union, business and cabinet delegates did not meet at all on January 22 following the contentious passage of the Health Insurance law, and at a session on January 26 were unable to agree either on wage regulation at state companies, a minimum wage or increases in bus and rail tickets.

Cabinet has promised to approve a new labour code, a law on public service and a law on collective bargaining by September this year.