Oľga Keltošová is a parliamentary deputy for the opposition Movement for a Democratic Slovakia (HZDS) and a member of the parliamentary Social Affairs Committee. In recent months, Keltošová has emerged as the chief spokesperson of a moderate wing within the HZDS that seeks to reinvigorate the movement after its fall from power in October, 1998.
From 1994 to 1997, Keltošová was the Minister of Labour, Social Affairs and Family in the government of former Premier Vladimír Mečiar. In March 1998 she was appointed Slovakia's ambassador to the United Nations' permanent mission in New York, but returned from her posting before the September national elections due to internal problems within the HZDS. 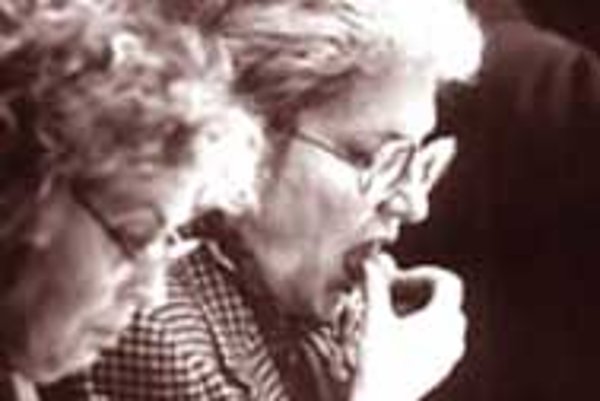 Font size:A-|A+  Comments disabled
Oľga Keltošová is a parliamentary deputy for the opposition Movement for a Democratic Slovakia (HZDS) and a member of the parliamentary Social Affairs Committee. In recent months, Keltošová has emerged as the chief spokesperson of a moderate wing within the HZDS that seeks to reinvigorate the movement after its fall from power in October, 1998.

From 1994 to 1997, Keltošová was the Minister of Labour, Social Affairs and Family in the government of former Premier Vladimír Mečiar. In March 1998 she was appointed Slovakia's ambassador to the United Nations' permanent mission in New York, but returned from her posting before the September national elections due to internal problems within the HZDS.

The HZDS has scheduled a spring congress at which the future of the movement will be discussed and a return to power planned. The Slovak Spectator asked Keltošová what role the HZDS was planning to play in Slovak political life in 1999.

The Slovak Spectator (TSS): The HZDS announced on January 11 that it is going to form a shadow cabinet. What is the point of the shadow cabinet?

Oľga Keltošová (OK): First, I'd like to return to the period from March 1994, after the fall of the second government of [Premier Vladimír] Mečiar, until the elections [in September 1994]. The discussions of the shadow cabinet [in 1994] were usually held one day after government sessions, and the [shadow cabinet] programme was set in accordance with the materials the government had discussed at its last session.

I imagine that the activities of the current shadow cabinet will be identical with those of the one back in 1994. Shadow ministers will be named to match the ministers [of the new government] and their new competencies, which the government is preparing to set out (for example, the Construction Ministry should now also be taking care of regional development). So this time around, the individual shadow ministers will discuss the materials proposed and passed by the government of Prime Minister [Mikuláš] Dzurinda.

After these sessions of the shadow cabinet, the HZDS will give regular press conferences, which in fact means that the shadow cabinet would be a vehicle for dissenting political voices to some governmental proposals. Also, it means for us [the HZDS] a certain internal reorganization of our headquarters, where at the moment almost 90% of all professional cabinet departments have already been created. These are supervised by the shadow ministers, and there are teams of experts who work here [with the HZDS] either internally or externally.

TSS: Will you be in the shadow cabinet?

OK: I don't think so. I was in the shadow cabinet for a long time [in 1994] and I was also in two [Mečiar] governments, so I'll just stay with parliament.

OK: No, we didn't, because the shadow cabinet is formed by one political party. It was the same in 1994. It's also unusual to form shadow coalitions.

TSS: Is the shadow cabinet a sign that the HZDS is preparing to retake power in possible early parliamentary elections?

OK: Yes, it could be said that way, though the main reason was to establish and maintain a team of experts who would be ready to shift into the role of a ruling movement.

TSS: Will the shadow cabinet offer help to the coalition? Will it give proposals on particular problems?

OK: Since the elections, we have had very good cooperation with the Labour and Social Affairs Ministry. We [the parliamentary Social Affairs Committee of which Keltošová is a member] have just set up a two-day conference with the Ministry's officials, where we want to study the legislative programme of the ministry for 1999. From the point of view of this area and this particular Ministry, there is useful and effective cooperation with opposition MPs. I don't know the situation at other ministries, but I am very pleased that the concept of transformation of the social sphere became a part of the government's programme. So yes, we will cooperate with the coalition on legislation and other aspects.

TSS: Does that mean that you would accept an offer of cooperation with the ruling coalition in any area?

OK: Yes, we [the HZDS] certainly will take such an offer, because I personally feel responsible for completing this period of transformation in the social sphere, which we set out on in 1994. I have to say that during my two election terms as a minister, I had many colleagues whose political orientation was far from that of the HZDS, but despite that we wanted to cooperate with these people because there are not many experts on social affairs. We cannot risk losing experts in this area just because they wear a different political uniform.

TSS: Will HZDS chairman Vladimír Mečiar be the premier of the shadow cabinet?

OK: I don't see any other alternative.

TSS: After September elections, HZDS representatives said the ruling coalition would last only until March or April 1999. Do you still think this?

OK: My own prediction was for about one year. I think that especially in the last few weeks the tensions within the government coalition have become evident not only to MP's and politicians but to the public as well, and I expect further clashes within the coalition in March over the preparation of the state budget, which is the acid test of every coalition, and then again over direct presidential elections, which will be another test of stability of the coalition. I don't want to comment on the opinions of some coalition politicians, but I do think that internal coalition problems shouldn't be explored and explained in the media. It's rather an amateurish mistake on the coalition's part.

TSS: In October the HZDS said that it's preparing itself for a frontal attack on the political scene in the spring of 1999. What will this attack be like?

OK: It's no secret that the April congress of the HZDS will be a turning point, first concerning the transition of the movement into a political party, which will then influence the tactics and strategies of HZDS in the future.

TSS: What is the future of the HZDS? How much will it change?

OK: We have found ourselves in a new position as the parliamentary opposition, and any change in the HZDS will depend on people in the movement who have a clear vision of Slovakia's foreign policy. Our former coalition partners the [far-right nationalist] SNS party and the [left-leaning] Association of Slovak Workers had different opinions on integration into EU and NATO. This is one of the crucial points on which people's opinions divide. [The HZDS's] integration intentions, however, are not questioned by most of our representatives, even at the regional and municipal level.

The second aspect is that the HZDS has to look for a potential coalition partner in the wider political context. If the movement defines itself, as I hope, as a centrist movement with a slight leftist inclination, it will have to cooperate more closely with parliamentary and non-parliamentary parties of a similar political orientation. These two aspects will be dealt with at the April extraordinary republic congress of the HZDS, and the regular everyday politics [of the HZDS] will have to be adjusted to the results of the congress.

TSS: Are you considering cooperation with governing coalition members like the reformed communist SDĽ party, or the centre-leftist SOP party?

OK: During the [November] municipal election campaign I travelled a lot around the country, I visited over ten districts and I discovered that municipal politics, thank God, have slightly different criteria for cooperation than national politics. At the municipal level, natural coalitions were formed and pushed themselves forward, and in these coalitions it wasn't uncommon for the HZDS to support the candidates of the SOP or the SDĽ. I was pleased that our members had no problems communicating with the candidates of the above-mentioned parties, and that the HZDS centre-left orientation was evident.

TSS: Does this mean that the HZDS will cease to cooperate with the SNS party?

OK: Absolutely not. The SNS party has been our natural partner since 1992, when we formed a government coalition for the first time, and I think that the SNS is also going through an internal process of reconciliation. Its main political aim, the founding of an independent Slovak Republic, was fulfilled in 1993. Currently, we are cooperating with them in the parliamentary opposition, and at the local level many of our common candidates were successful, so I think there is a natural evolution towards further cooperation.

TSS: Is the HZDS movement determined to transform itself into a political party?

OK: According to my information, the majority of opinions favour this transition. I personally have been a long-time supporter of this idea.

TSS: Will there be further organizational or personnel changes inside the HZDS?

OK: There are a couple of new nominees for top positions in the HZDS' political leadership, in the republic council and at the regional level. I personally think that people who have worked in politics for a considerable time - and bear in mind I have worked in top politics since 1990 - should naturally be replaced. I'm not talking about wholesale generational changes, because I don't think that young blood should be a necessary qualification. I am convinced that new people bring new ideas, however, and when these new ideas go hand in hand with the experience of older politicians, then the mix is significantly stronger. So, I would appreciate having more young and middle-aged people in the top structures of the HZDS.

TSS: How do you see the development of the political scene in 1999?

OK: The clashes inside the ruling coalition presented in the media recently are perhaps just the tip of an iceberg. I have worked in politics long enough to remember that thunder rumbles occasionally even between the best coalition partners, but the operative principle is to solve problems "at home" and not to take unresolved affairs outside to a public which is not sufficiently informed. The voters of the coalition parties are worried - I have seen it in the media - and this does not improve stability in the country. These are very bad signals towards foreign countries also, and they don't improve the image of Slovakia abroad, especially these days when we are striving for a revision of the European Commission's assessment report on Slovakia's political development. I'd say the coalition is scoring own goals at the moment.

OK: He actually never left politics. We work together in the HZDS, so I can see his activities. But he himself will anounce when and how he will return. I supported his move to withdraw from public life after the elections. He correctly predicted that his presence had glued the coalition together to a certain extent, and now that glue is missing.