INTEREST is high in Slovenská Autobusová Doprava (SAD), where 17 firms under the SAD umbrella are to be privatised before summer.
THE LONG-awaited privatisation of companies united under Slovakia's public bus carrier, Slovenská Autobusová Doprava (SAD), is set to begin, said Privatisation Ministry spokesman Robert Merva.
The ministry's selection committee was to meet March 4 to review bids for 49 per-cent stakes in SAD Bratislava and SAD Dunajská Streda, the first two of 17 regional SAD companies undergoing privatisation.
The Transport Ministry and the Privatisation Ministry have said all 17 operators are to be privatised by this summer. 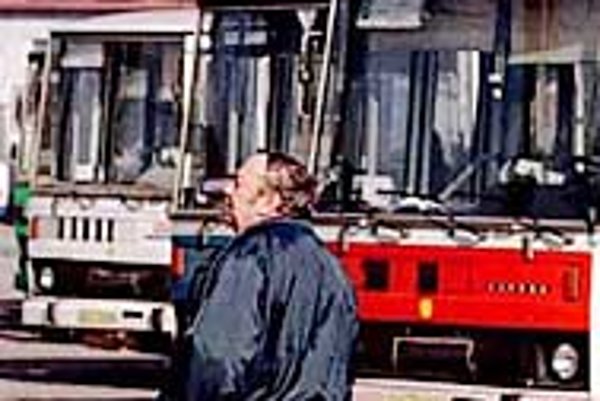 The ministry's selection committee was to meet March 4 to review bids for 49 per-cent stakes in SAD Bratislava and SAD Dunajská Streda, the first two of 17 regional SAD companies undergoing privatisation.

The Transport Ministry and the Privatisation Ministry have said all 17 operators are to be privatised by this summer.

According to the Privatisation Ministry, five potential investors have submitted bids in the tender for a 49 per cent stake in SAD Bratislava, and two companies have made bids for a same-sized stake in SAD Dunajská Streda. Of these, Austrian transport company Postbus AG and the French operator Connex, a subsidiary of Vivendi and one on the largest public transporters in Europe, have expressed interest in all 17 SADs.

Connex general director for the Czech Republic, Hungary and Slovakia, Cyril-Hervé Carniel, said "Bratislava will be for us a sort of test of privatisation in Slovakia. If we find the process is fully correct, we will make additional offers. If not, we will go somewhere else.

"The question remains if we will invest more in the US, South Africa, Japan or Slovakia. We are interested in Slovakia for three reasons: economic growth, business environment and overall stability. There are highly qualified experts in the field of transportation. When you combine this with the financial resources which are missing, it is possible to develop an interesting harmony."

Vienna-based bus transporter Blaguss has also expressed an interest in SAD Bratislava, noting the long-term relationship between the companies. According to company representative Thomas Blaguss, "we have been working together in co-operation with SAD Bratislava for many years. We know this company very well, we know the management, they're working excellently. We consider this an opportunity to enlarge our company; we think we fit together very well. We are both about the same size concerning the number of coaches.

"Our plans are to renew the Slovak busses because their average age is very high. If we can manage it, we will buy new buses," said Blaguss.

Director of SAD Bratislava Emil Binda said last November: "A positive effect of this project is the state's interest in solving the disadvantageous situation in the renewal of the bus fleet. If the project goes forward, it will change the adverse age structure of the buses."

Michal Humeník, director of SAD Dunajská Streda, agreed: "The project of transforming and privatising SAD can bring fundamental changes in the economic situation for the companies, and will create space for investors who can secure the modernisation of the bus fleet."

Connex's Carniel also emphasised the importance of modernisation, saying: "We would invest mostly in new buses, which should make up the base. For the rest, we would have used buses, which can help for three or four years."

While Bratislava and Dunajská Streda are the first SADs to be privatised, more will follow. The Privatisation Ministry has said it is interested in receiving proposals by April 5 for the next round of SAD companies: Košice, Humenné and Prešov in the east, Banská Bystrica in the central region, and Nitra and Nové Zámky in the west of the country.

Commenting on the competition among investors, Carniel observed: "Investors fall into three groups. The first group doesn't have an interest in transport, but only in ownership and would like to make a further sale. Firms in this group should not be considered, according to the privatisation criteria, because first it will be necessary to invest in the companies.

"The second group are international companies, but state-owned, and that will be difficult to accept. The state is funding the SADs, and I expect that this will continue. It would mean that funding from the Slovak state budget would be used by state-owned companies from other countries.

"The last group are professional companies dealing in transportation who want to be involved for the long-term. In this group there are maybe 10 or fewer [interested firms]," says Carniel.

As a group, SAD companies reported a nearly four-fold increase in profits in 2001 from the year before. According to the Bus Transport Association, the 17 companies together made a profit of Sk201 million on revenues of Sk8.6 billion. Long-distance domestic, international and non-regular service, as well as non-transport activities accounted for the dramatic growth, while subsidised commuter and city transportation sectors both lost money.