Campaign '02 kicks off with food and footwear

POLITICAL analyst sees increased nationalism in party messages, while politicians promise not to hire models this time around.
WHILE most political parties are still discussing their candidates for September's parliamentary elections, a few have already plastered the country with campaign billboards and distributed postcards reminding voters that the ballot is nearing.
So far, the political ads have been a far cry from the dowdy, earnest placards that prepared the nation for campaign '98.
"What shoe would you like Slovakia to wear?" the inhabitants of 16 major Slovak towns are asked on billboards erected by the non-parliamentary Smer party led by Robert Fico. 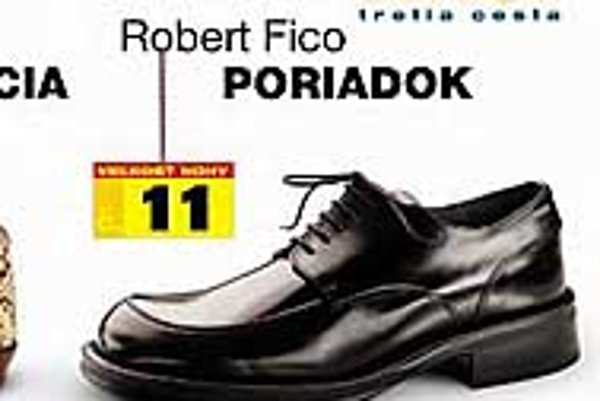 Font size:A-|A+  Comments disabled
WHILE most political parties are still discussing their candidates for September's parliamentary elections, a few have already plastered the country with campaign billboards and distributed postcards reminding voters that the ballot is nearing.

So far, the political ads have been a far cry from the dowdy, earnest placards that prepared the nation for campaign '98.

"What shoe would you like Slovakia to wear?" the inhabitants of 16 major Slovak towns are asked on billboards erected by the non-parliamentary Smer party led by Robert Fico.

The billboards offer voters three choices. The first is a size six running shoe identified as belonging to Prime Minister Mikuláš Dzurinda, with the brand name "corruption" and "made in bicycle" (a reference to the PM's summer 1998 bicycle campaign tour).

Then there is a size nine crocodile skin cowboy boot ascribed to former PM Vladimír Mečiar, called "privatisation" and "made in Elektra", the name of Mečiar's family villa in Turčianske Teplice.

The final piece of billboard footwear is a size 11 polished black leather shoe accompanied by the words "order" and "made in Slovakia" by Smer's Fico.

Some 80,000 postcards were distributed along with the billboards.

"These billboards are clear evidence that the campaign is already here", said Grigorij Mesežnikov, head of the Institute for Public Affairs (IVO) think tank in Bratislava.

Aiming to distance himself from the wild privatisation scams of Mečiar's years in office, or the many corruption scandals that have beset Dzurinda's cabinet, Fico has frequently called for "order" in the country, and has made the word part of his party's slogan: "Order, justice, stability".

Mesežnikov is convinced that Fico is targeting "the disappointed electorate" - largely younger voters frustrated with the slow pace of change.

"He's put Dzurinda and Mečiar on the same level and presented himself as an alternative. He tries to use all existing negative stereotypes, but at the same time he himself contributes to creating these stereotypes. He was one of the most vocal politicians to paint Dzurinda's cabinet as extremely corrupt," Mesežnikov said.

Fedor Flašík, Fico's controversial media advisor, said the Smer leader himself came up with the shoes idea. "I and my team just carried it out."

Fico has invested a lot of political capital in Flašík, saying when he hired him three years ago that Flašík "is a man who can make Coke or Pepsi from water, so I'd be stupid not to make use of his advice for my media campaign."

Four years ago Flašík prepared a billboard of the Swiss countryside for Mečiar's HZDS party, presenting the scene as one from "Slovakia, country of your heart".

He was also behind the enormous clock which stood in front of the Presidential Palace in 1997 and 1998 counting down the days left in office for then-President Michal Kováč, a fierce enemy of Mečiar.

"If Fico becomes prime minister, I'm convinced he'll secure order and a decent life for citizens," says Flašík nowadays. He adds, however, that finding out the real shoe sizes of Dzurinda and Mečiar required some research.

"Ladies from the party headquarters who dress the politicians told us the shoe sizes. Fico's foot I know. It's huge," Flašík said, adding that more billboards were coming shortly: "Our creativity has no limits."

But the first party to officially declare its campaign open was the ruling coalition Christian Democratic Movement (KDH) at a February 16 Nitra party meeting.

The KDH, whose electorate is older and deeply conservative, elected to portray leader Pavol Hrušovský standing in front of a still life scene with a loaf of bread, a block of cheese, grapes and a glass of red wine. The KDH leader said of the image: "We want a Slovakia which believes in itself. The KDH believes in itself."

The Christian Democrats have refused to team up with other right-wing parties before elections, but have promised not to attack potential partners during its pre-election campaign.

Although the Hungarian Coalition Party (SMK) is one of the five right wing parties the KDH has pledged not to attack, SMK leader Béla Bugár says he's not reaching for the olive branch. If a bill proposed by the KDH to fight a controversial Status Law from Budapest should pass in the Slovak parliament, he says, "it doesn't matter where the KDH ranks us. We wouldn't form a government with them."

Mesežnikov said the KDH's "recently bolder nationalist rhetoric" could definitely score some points with the electorate, but at the same time was "putting the possibility of forming a right-wing cabinet at risk".

Former KDH head Ján Čarnogurský, however, argued that "we didn't order the Status Law for our campaign. Our reaction to it aims to defend the autonomy and equality of all Slovak citizens."

The KDH also said it was not going to invite celebrities to boost its campaign, a move many parties have made in the past. The HZDS brought German super model Claudia Schiffer to appear with Mečiar in 1998, while Italian actress Ornella Mutti and French actor Gerard Depardieu also made public appearances with the former PM.

Mečiar, for his part, promises his party will have a more youthful look this time around, that one third of its candidates will be women, and that he does not insist on becoming prime minister should the situation arise, "although it's tempting".

IVO's Mesežnikov, however, believed that bringing in younger people "won't help the HZDS gain younger voters. The party is best characterised by one name, and that name is Mečiar."