WHEN communism started to crumble in the 1980s, enabling people to leave what was then Czechoslovakia, Bratislava-born climber Dina Štěrbová went to Nepal. There she met Věra Komárková, a Czech emigrant to the US who had conquered Annapurna in the Himalayas.
Four years later, the American invited Štěrbová to join her Himalayan expedition to climb the 8,201-metre peak Cho-Oyu. She helped Štěrbová accomplish a dream that had been with her since 1959. At the age of 44, Štěrbová was the oldest woman to attempt to climb 8,000 metres. 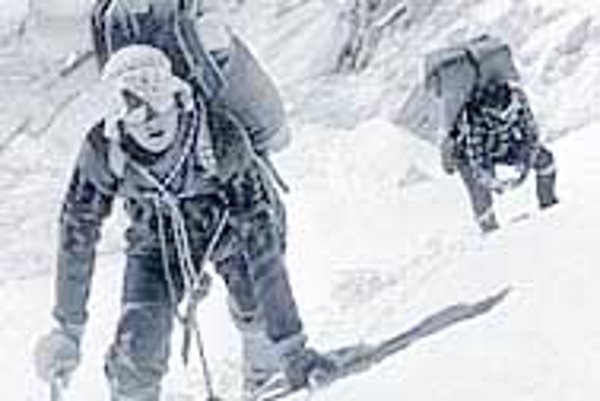 Font size:A-|A+  Comments disabled
WHEN communism started to crumble in the 1980s, enabling people to leave what was then Czechoslovakia, Bratislava-born climber Dina Štěrbová went to Nepal. There she met Věra Komárková, a Czech emigrant to the US who had conquered Annapurna in the Himalayas.

Four years later, the American invited Štěrbová to join her Himalayan expedition to climb the 8,201-metre peak Cho-Oyu. She helped Štěrbová accomplish a dream that had been with her since 1959. At the age of 44, Štěrbová was the oldest woman to attempt to climb 8,000 metres.

In 1984 the expedition, which was also the smallest female contingent to attempt the climb, began to ascend the peak from Kathmand point. They followed the north-west route German mountaineer Reinhold Messner had taken in 1983. The two women were accompanied by two sherpas, and were without a doctor or radio. They were the only climbers in the area, and could rely only on each other. There was no chance of rescue if anything went wrong.

"It was a completely Spartan expedition based upon a fanatic decision, in my case even multiplied by the conviction that it was the last chance I would get in my life," says Štěrbová, who became the first woman in Czechoslovak history to climb an 8,000-metre peak.

Šterbová will share the successes and failures of her climbing career with Bratislava audiences on Sunday, March 10. She will be one of many adventurers participating in the Vanderfest festival, which will attract travellers from around the world. From March 6 to 10, the festival will screen films, show slides, hold exhibitions and discuss the experiences of different expeditions.

"The festival allows the audience to become part of the experiences of mountain climbers, divers, spelunkers and ski-alpinists on a large scale," says Jozef Junas, the driving force behind the festival. "It also serves as a meeting point for exchanging or obtaining information for anybody, not just expedition travellers."

Vanderfest is organised by Albatros, an NGO promoting tourism in Slovakia world-wide. It was founded by Junas in 1993, right after the Czechoslovak Club of Expedition Tourists ceased to exist due to the Czechoslovak divorce.

"During the 1980s, the exchange of experiences among Czechoslovak travellers was oriented only to the East, as the West was closed," Junas says. "However, there were no maps of the areas the expeditions went to explore at that time. Travellers traded the experiences only among themselves. That's the reason the club was formed - to create better access to such information."

The idea of organising the Vanderfest festival came to Junas three years after the launch of Albatros. Initially held only once a year, it is now organised twice a year.

The upcoming ninth annual will also present Unesco world heritage sites and water-sport expeditions. Several rafters will show slides from Scandinavia, Slovenia, the Alps as well as the Czech and Slovak Republics, while divers will portray Caribbean ocean life. However, it is climbing and trekking that are the main focus of the festival.

Among the festival's headliners, visitors on March 8 can meet Laco Janiga, the legend of the High Tatras rescue service. Janiga also founded the ski-alpinist tradition in Slovakia (in which skis fitted with special bindings and exteriors allow users to both cross-country and alpine ski), and has participated in countless international climbing expeditions.

Familiarly called 'Daddy' for his soft-heart, Janiga will present his recently issued biography Return to the Mountains. In its seventh chapter, he pictures the tragic crash of a Tatras' emergency helicopter in 1979. Janiga was the only one of the eight rescuers aboard who survived.

"Janiga is a very precious man," says Junas, who knows him well. "He sacrifices himself for other people and will do anything to protect nature. It's also incredible how he managed to cope with the tragedy and get back to living a full life."

Tatra mountain porter Peter Šperka on March 6 will offer an insight into the lives of rescue team members. On the following day, telemark specialist Peter Kollár will talk about his latest expedition to Pamir, where he skied down the 7,134-metre Pik Lenina - a historical first.

Over the weekend, visitors can watch prize-winning movies by traveller and director Pavol Barabáš, capturing people living in mountains far from civilisation or those seeking adventures in extreme conditions. Also, a member of a Slovak team which has taken on some of the world's highest peaks will screen their January ascent of the American Aconcagua.

Almost every hour a new presentation will begin, as the screenings and discussions are held simultaneously in two rooms. In the cross hall, next to a pizza restaurant, an indoor climbing wall will be installed. Visitors are encouraged to exhibit photos from their travel experiences.

Even though most of the speakers come from central Europe and translations will be done only into Slovak, English should be no problem. According to Junas: "You don't need language to watch these breathtaking films or slides, and if you do have questions or want to talk, most of the people here speak English, as they travel the world."