Nato erases any doubt over Mečiar

AFTER MONTHS of gentle sparring over Slovakia's Nato entry bid, American government representatives and Slovakia's most popular political party, the Movement for a Democratic Slovakia (HZDS), came to blows last week.
The first shot was fired by US ambassador to Nato Nicholas Burns, who was visiting the Slovak capital on a tour of all nine countries angling for an invitation to join the military alliance at its expansion summit set for November in Prague.
Burns said at a February 27 press conference that the US government had "no evidence that the leadership of that party [the HZDS] has changed" since it was judged in 1997 "[not to] demonstrate a commitment to democracy and the rule of law." 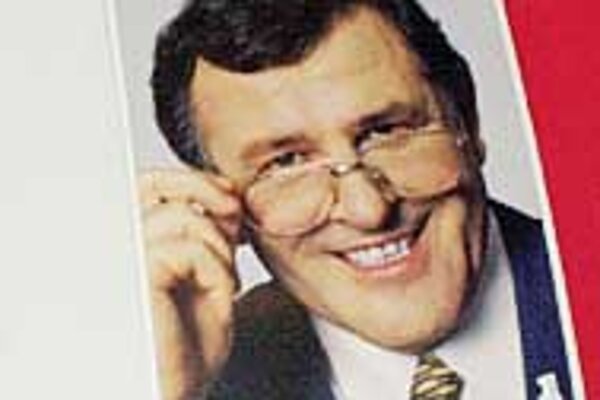 The first shot was fired by US ambassador to Nato Nicholas Burns, who was visiting the Slovak capital on a tour of all nine countries angling for an invitation to join the military alliance at its expansion summit set for November in Prague.

Burns said at a February 27 press conference that the US government had "no evidence that the leadership of that party [the HZDS] has changed" since it was judged in 1997 "[not to] demonstrate a commitment to democracy and the rule of law."

Nato decided at its Madrid summit in 1997 not to invite Slovakia to join because of concerns about authoritarian behaviour by the 1994-1998 Vladimír Mečiar government.

"There's no room in Nato for anti-democratic movements or governments," Burns reiterated.

Later, at a private meeting with the heads of Slovak parties considered more pro-Western than the HZDS, Burns said point-blank that if the HZDS formed any part of the government after September elections, Slovakia would not be invited to join Nato.

"He said that if the HZDS has even one minister in the government, we won't receive an invitation," reported Pavol Rusko, head of the non-parliamentary Ano party, who was present at the meeting.

While political observers said the comments were similar in tone to what Nato had been saying for years, Burns' words appeared to provoke a response from Mečiar, the leader of the HZDS and a three-time Slovak prime minister.

"While so far we have not conceded that there is any alternative [to joining Nato], today we have to consider that this is a possibility," said Mečiar for the ČTK press agency. "These 5.3 million people aren't about to move. They'll live."

The party then issued an official statement: "It's not good when [Nato entry] conditions are changed or narrowed with each foreign visit. One of these conditions is that elections in Slovakia should be free and democratic. The elections haven't been held yet, but already they're under a finger raised in warning. That's not free or democratic. People live here, and it's inadmissible that in the name of integration we continue to impoverish a huge group of people."

"Mečiar and the HZDS expressed a great deal of anxiety," said political scientist Grigorij Mesežnikov, head of the Institute for Public Affairs (IVO) think tank in Bratislava. "I think they realised for the first time that Nato is serious, whereas before they believed they might be able to convince Nato they had changed, or get into the government through some subterfuge. Burns' statements showed very clearly that the HZDS as a party is unacceptable for the West.

"Mečiar's admission that there are alternatives to Nato entry also shows that the HZDS puts being in power above Slovakia's being in Nato, and that their claims to be willing to go into opposition rather than prevent the country's integration were dishonest," the analyst added.

The verbal exchange between Nato and the HZDS came as the party's chances of forming part of the next Slovak government appear to be narrowing.

Western diplomats for months have quietly been talking with Slovak politicians about the consequences of working with the HZDS. Burns' private audience, besides US ambassador to Slovakia Ronald Weiser, included Rusko, Prime Minister Mikuláš Dzurinda (head of the Democratic and Christian Union party, SDKÚ), Daniel Lipšic (vice-chairman of the Christian Democrats, KDH), Deputy Prime Minister Pál Csáky of the SMK Hungarian party and Robert Fico of the non-parliamentary Smer party.

The HZDS and its partner in the 1994-1998 government, the Slovak National Party (SNS), were not invited.

Paul Oglesby, spokesman for the US embassy in Bratislava, would not comment on Rusko's report of the meeting. "In private diplomatic discussions we want to encourage a frank exchange of views, so as a matter of practice we do not publicly comment on what was said in such meetings," he said.

But Ján Fule, spokesman for President Rudolf Schuster, said that foreign diplomats had also been to see the country's head of state. One of the topics discussed, he said, had been the wording of the Constitution, which says the President is not obliged to empower the winner of elections with the task of forming a government.

"The President has said several times that it's up to him, and that he'll empower the party to form the government which beforehand demonstrates that it is able to do so. One of the main criteria here is whether the party has the confidence of the West," said Fule.

The HZDS, running at between 28 and 30 per cent voter support, leads by a wide margin over second-place Smer, with around 15 per cent. While the HZDS is expected to win 2002 elections, most Slovak politicians have declared they would not work with the party while Mečiar was at the helm.

Mesežnikov said the President could face a difficult decision following elections. "He'll be under great pressure from all sides. If the HZDS wins, they'll demand the right to form the government, but he'll also have to take into account the ability of each party to build a stable cabinet, as well as the implications for Slovakia's integration ambitions.

"But I think if there's any danger the HZDS could form a government, the President will probably avoid giving them the chance."

HZDS spokesperson Žaneta Pittnerová said the party was negotiating a visit by Mečiar to Washington, in order to speak directly to US politicians. It would be the former Slovak leader's first visit to the US since 1994.