AWAY from the noisy downtown areas of Bratislava, where playback music echoes through half empty streets on Saturday night, live music is played only in small underground clubs out of the city centre.
Hidden in the basement of Bernolák student dormitory near Trnavské mýto is Čajovňa a Divadielko v podzemí, a modest tea room and a small improvised theatre. It features a rare offering of regular live music.
"We regularly organise theatre performances, concerts of all types of music, and host many groups from all over Slovakia," says Vladimír Kvetan, one of the organisers. 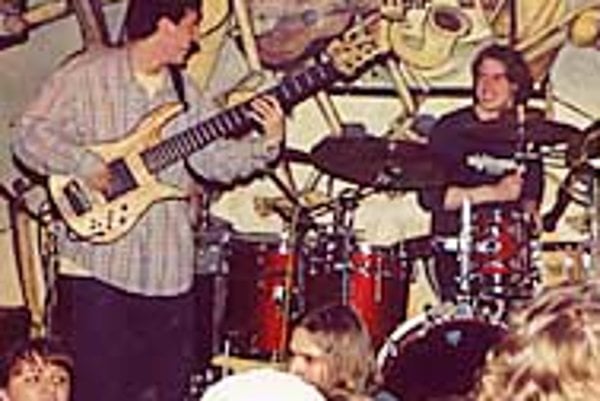 Font size:A-|A+  Comments disabled
AWAY from the noisy downtown areas of Bratislava, where playback music echoes through half empty streets on Saturday night, live music is played only in small underground clubs out of the city centre.

Hidden in the basement of Bernolák student dormitory near Trnavské mýto is Čajovňa a Divadielko v podzemí, a modest tea room and a small improvised theatre. It features a rare offering of regular live music.

"We regularly organise theatre performances, concerts of all types of music, and host many groups from all over Slovakia," says Vladimír Kvetan, one of the organisers.

Divadielko is one of the few places in Bratislava offering possibilities to young music groups and those who want to hear alternative music. As with many other alternative projects, this one was also based on enthusiasm, money from beverages and tickets, and bands often playing for free.

"The number of clubs opened up in 1993. At that time people were enthusiastic about doing something. Propeler opened on the Petržalka side of the Danube, and great concerts were performed every day. Stoka theatre was excellent as well. U Club still exists and keeps the Bratislava dance scene alive," recalls Kvetan.

"But Bratislava really lacks a bigger club in the centre where concerts could be organised. I don't mean something the size of sports stadium - a place for 500 people would be sufficient."

Downtown Bratislava bars, with high rents, low margins and a clientele with no tradition of going out to listen to pub rock bands, rarely offer space to young talents. They also fight a running battle with residents who complain about evening noise levels.

"I've basically got from six until midnight every night to make as much money as I can, and I can't afford to have any factor here which might not bring people in" said the owner of a Bratislava Old Town pub who asked his name not be used.

John Young, who plays guitar with Slovak-expat cover band The Mad Fish, said he often played for free just to get time on stage.

Despite the difficulties, some clubs still cling to existence. Since opening in 1992 in Brezno in central Slovakia, the Bombura club has hosted many groups from Slovakia and abroad. Live concerts are held every Saturday, as well as dance parties, jazz sessions and lectures.

"There is no tradition of clubbing in Slovakia," says Marian Pavúk, the owner of the club. "In the past there were not many live music clubs. Money, of course, is the reason. The rent that many owners pay on their clubs mean there is no money left for organising live events. And then they have to pay up to 25 per cent tax on ticket receipts, so musicians are usually paid a pittance from beverage sales."

Brezno has 20,000 inhabitants, but with many young people leaving for university and work in less depressed areas it is perhaps not the most obvious location for a vibrant club. Bombura, however, makes a living from tourists visiting the nearby Low Tatras. Along with the Alternative Summer open air festival, they organise Ďumbierfest, a festival in March aimed at mountain climbers featuring movies and lectures on climbing expeditions.

The other great problem Pavúk finds in running his club is the mentality of officials in local governments and the commercialisation of music and culture.

"We are the only alternative club here, and we are threatened by five commercial discotheques. For the local government, clubs like mine are on the same level as commercial discotheques. We have to pay taxes not only on the club but also on festivals. The town sees nothing from it. It's a catastrophe, and I don't know how we survive. The town even supports a community centre that, during the 10 years Bombura has existed, organised one play and a bunch of commercial programmes. As far as I know they get Sk6-7 million annually. But when we organise a festival we don't get a single crown. I don't know how we survive."

The story is the same in almost all of the bigger towns in Slovakia. In Trenčín, for example, only the Arena 51 club holds regular weekend music concerts. Local pubs occasionally hold jazz concerts.

"There is no long-term active club in Trenčín," says Juraj Benda, a concert promoter who has been active on the music scene since he was 18.

Benda also blames the media for not supporting alternative music and focusing instead on mainstream commercial releases.

"Young people in Slovakia don't get a chance to hear alternative types of music. Media, radio stations especially, broadcast music for commercial purposes," he says. "It would be better if they gave more space to something alternative. In the past people appreciated lots of different kinds of cultural activities, probably because they had no chance to experience something different under the regime, so more people attended concerts than today. Now all you get are bars drawing people by advertising tequila for Sk20."

On the other side, musicians and their admirers are finding a way out of the trap by using the Internet to promote and share alternative music ideas.

"I'm optimistic," says Daniel Salontay, a member of the young Bratislava group Dlhé diely, and one of the producers of the independent label Slnko (Sun) Records. "You have to go abroad to appreciate what we have here. Prague, for instance, is totally commercialised. Bratislava, despite all its problems, is off the main tourist track and has kept its alternative spirit. The problem is that it's still not possible in Slovakia to assemble a large enough group of people to change anything.

"There are many young people with excellent ideas discovering their own ways to distribute, discuss and listen to music. There are some excellent web-projects."