"Many people have simply resigned themselves."
Brigita SchmögnerováAs The Slovak Spectator enters its fifth year of publication, the editorial staff chose two people as 'Slovak man and woman of 1998'. The 1998 Woman of the Year is Finance Minister Brigita Schmögnerová. More an economist than a politician, Schmögnerová has been asked to guide the country through its difficult economic transformation.
It is half past seven on a cold Saturday evening in December, but Brigita Schmögnerová is still at work. As Slovakia's new Finance Minister , Schmögnerová has perhaps the toughest job in the cabinet - rescuscitating a moribund economy and designing a package of price hikes that will primarily hit average citizens.
Schmögnerová says she does not feel ideally suited to the post she holds. Now 51 years old and married, she cuts a gentle, stylish figure as she leans back in her chair. "From the very beginning I felt that the best position for me would be the same position I had in 1994," she says, referring to the vice-premiership she held in the six-month interim government of Jozef Moravčík. 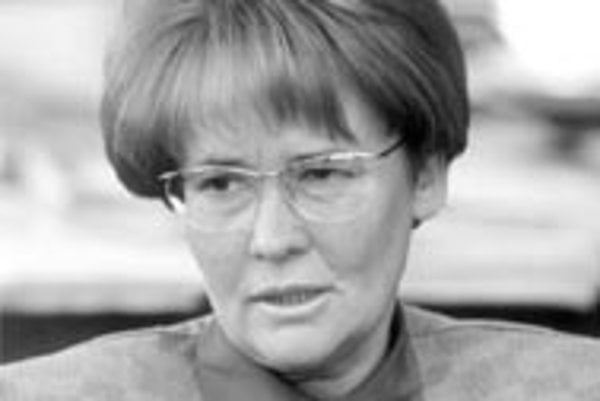 As The Slovak Spectator enters its fifth year of publication, the editorial staff chose two people as 'Slovak man and woman of 1998'. The 1998 Woman of the Year is Finance Minister Brigita Schmögnerová. More an economist than a politician, Schmögnerová has been asked to guide the country through its difficult economic transformation.

It is half past seven on a cold Saturday evening in December, but Brigita Schmögnerová is still at work. As Slovakia's new Finance Minister , Schmögnerová has perhaps the toughest job in the cabinet - rescuscitating a moribund economy and designing a package of price hikes that will primarily hit average citizens.

Schmögnerová says she does not feel ideally suited to the post she holds. Now 51 years old and married, she cuts a gentle, stylish figure as she leans back in her chair. "From the very beginning I felt that the best position for me would be the same position I had in 1994," she says, referring to the vice-premiership she held in the six-month interim government of Jozef Moravčík.

But during October negotiations on the formation of a coalition government, she explains, her party, the reformed communist Party of the Democratic Left (SDĽ), nominated her as Finance Minister in order to capture at least one important economic post in the new government. "So, whether I liked it or not, I simply had no other choice," she says.

It is nothing unusual for Schmögnerová to be ambivalent about her profession. Although macroeconomics is a field she knows inside out, having authored more than 50 articles on the subject in foreign and domestic journals, Schmögnerová has long harbored an ambition to write more creatively. She also laments the impact that the long hours she works have had on her family life, particularly on her only son.

Still, there is no question that in Schmögnerová, Slovakia has a well respected and capable Finance Minister. Martin Barto, a senior analyst with investment bank ING Barings, says that Schmögnerová "has deep expertise in her field, and has always been more of an economist than a politician." Schmögnerová is also "a very well respected personality," Barto continues, "because she has so many things to offer, having written poetry for example. She is also very gentle, and never attacks her opponents."

The Slovak Spectator spoke with Brigita Schmögnerová on December 12, four days before the cabinet's new economic package was supposed to be unveiled to the public.

The Slovak Spectator (TSS): How do you feel about the status of women in Slovakia? As someone occupying a high position, are you conscious of being a role model for women?

Brigita Schmögnerová (BS): Well, I don't like models very much. The situation of women in Slovakia - it's quite clear that for the time being, it is quite exceptional for a woman to be involved in politics. The majority of politicians are men, and if you look at the new parliament, the share of women is unfortunately even lower than it was in the former parliament.

I think the reason is quite obvious - until now, Slovakia has been quite conservative both culturally and socially, and it still is. The majority of men do not expect women to be involved in public life. The situation is different with women - psychologically they are prepared to take part in public life, but they are very much involved in everyday life, with their jobs and household tasks. I think that after the social situation of the family has improved, women will be able to afford to become more involved in public life.

TSS: What made you decide to become an economist? If you had become something else, what would it have been?

BS: When I was much younger than you, I wanted to be a writer. I loved literature very much. In the 1960's, when I had to make a decision, the political situation was not that easy, especially in the first half of the decade. At that time I was studying in a class which was focused on computers. My choice was either literature or something like that, or mathematics. I found something in between, and that was economy. I studied something called "Mathematics in Economy."

TSS: Do you find it difficult, as a member of a party with a classic socialist platform, to lead the Finance Ministry in a country moving towards a full free market economy?

TSS: But the people who elected you may be expecting to see a more classic socialist platform. Does this create any tension in the government with parties further to the right on the political spectrum? How do you and [Deputy Premier for Economy] Mr. Mikloš and [Economy Minister] Mr. Černák get along?

BS: I think the government has agreed on the necessity of implementing measures to stabilise and improve the economy. And at the same time, we agreed that all these measures should be socially acceptable, that the most needy social groups will have to be compensated. Having said this, it doesn't mean that there are no differences of opinion [in the government]. I think there are, but maybe they are more based on some practical experiences than differences in how to reach these goals. I consider myself a little more experienced, having spent some time in the government in 1994, and having had to deal to some extent with similar issues like stabilisation of the economy.

TSS: How different is the situation in the cabinet now from that in 1994?

We are also all aware that the term in office is four years, which gives us relatively more time to decide on the steps we take, but on the other hand, there is naturally more room for individual parties to push through their particular interests. It is more complicated in this aspect.

TSS: Recently, some cabinet members, such as Justice Minister Ján Čarnogurský and Deputy Premier Ľubomír Fogaš, have engaged in some rather public bickering, giving the impression of disunity. Are you disappointed with their actions, and do you feel that they have forgotten about the trust voters placed in them during September?

BS: I don't feel like making a statement at this point. The fact is that I do not consider myself a professional politician, but I would like to appeal to all career politicians who are involved in high politics to be more responsible in what they do.

TSS: You have prepared an economic package that will affect Slovak citizens financially. How are you selling this package to them? What kind of vision of the future are you offering in order that they agree to be patient with such measures?

BS: I think we should definitely \is necessary. \And just the common people are going to pay for this. So why don't you try and put some people in jail?" And some people even say, "if the government isn't going to do this, we shall. We shall be the law." And I think that we should listen to this, and try to speed up the court process so that the people who broke the law and are really responsible for the present situation will pay.

TSS: What kind or moral price has been paid for capitalism in Slovakia?

BS: There has been a deterioration in the social situation, but I am afraid there has also been an even higher price paid from the moral point of view, especially in the last four years. The greater part of people have lost their desire to be involved in public life and to try and change the situation. Hopefully, after the elections, the situation will improve. But what I find unacceptable is that there has been a negative development in social values.

BS: Like people paying much more attention to their economic situation than to the development of some different qualities, qualities of life. I'm sorry whenever I meet young people who care more about what they earn than if their career is really challenging. This happens very often.

I also dislike the fact that many people have simply resigned themselves and stopped fighting against things like breaking laws, corruption and so on. They simply say, "if we want to survive, we are forced to go the same way, to accept these things." So, hopefully, if we as a government change some mechanisms and remain open to the public, we could start a new culture, and there would be some positive response to that as well.

TSS: How well does your family understand your job, your coming home late and so on? Is your husband very patient?

BS: Well, all he can do is be patient. He has had to get used to it, but it is much harder with my son. He always complains when I come home late.

TSS: Has the work been worth it? Are you satisfied with what you have achieved so far?

BS: We [the government] stepped into this business with the goal of repairing what was spoiled [by the former government]. If we succeed in reaching only 50% of our objectives, it will be a satisfactory result. Even if it is hard and we pay for it with our free time, it is certainly worth it.

But I have a desire for the future. When I leave politics, I'd like to write a book in which I look at the things I experienced from a different point of view.

TSS: What would the book be about?

BS: A review of the time I spent in government. I wanted to do that back in 1994. I had everything planned and all the material ready, and maybe it would have been a useful exercise, but I spent too much time on my duties as a member of parliament, so I wasn't left with enough time for writing. The name of the book would probably be a variation on "Years at Downing Street,"maybe something like "Years at the Finance Ministry."