The Slovak government will have to pay in December some $13 million in maturing interest on loans guaranteed by the state and taken by construction company Vodohospodarska Vystavba (VV). The announcement was made by Finance Minister Brigita Schmögnerová at a press conference on November 26.
VV's financial problems are becoming increasingly common among Slovak construction companies, who were engaged by the government of former Premier Vladimír Mečiar to build huge infrastructure projects in 1998 but have not been paid in full. 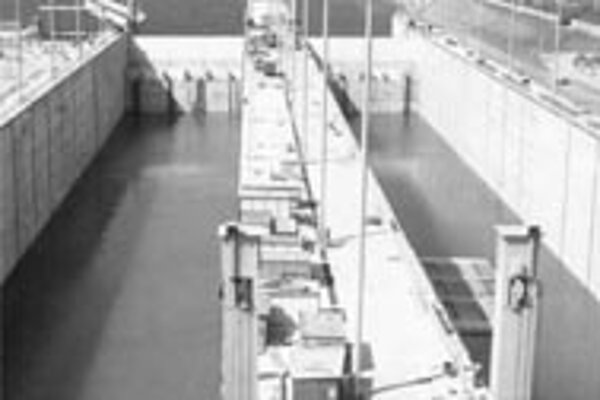 Font size:A-|A+0
The Slovak government will have to pay in December some $13 million in maturing interest on loans guaranteed by the state and taken by construction company Vodohospodarska Vystavba (VV). The announcement was made by Finance Minister Brigita Schmögnerová at a press conference on November 26.

VV's financial problems are becoming increasingly common among Slovak construction companies, who were engaged by the government of former Premier Vladimír Mečiar to build huge infrastructure projects in 1998 but have not been paid in full.

Schmögnerová said that that interest payments of 450 to 480 million Sk for two VV loans come due on December 16 and 18. These are loans that J.P. Morgan bank arranged for VVB in 1995 and 1996, totaling $200 million each. VV used this money for the construction of hydro-electric power plants in south Slovakia's Gabčíkovo and Žilina in the north.

"VV director and HZDS [opposition party] deputy Július Binder has turned to the Slovak cabinet with a request to pay off the interests payable in December, justifying his request by referring to the company's financial problems," said Schmögnerová.

Binder, however, explained that VV found itself in trouble because Slovenské Elektrárne, the monopoly energy producer, owes it approximately 5 billion Sk ($139 million).

The power generator has rejected any such claims, while Schmögnerová, for her part, told a November 30 press conference that "according to my information, SE has already paid about 5 billion Sk to VV," a charge which Binder denied.

"It was the [1994] Moravčik cabinet that decided on the transformation of Slovenské Elektrárne (SE)," Binder said. "Afterwards, SE started to behave as a commercial company and handle state property as its own."

Asked about the extent of SE's responsibility for the construction company's troubles, Dušan Meszáros, an analyst with the London office of Dutch investment bank ING Barings, confirmed that the electricity monopoly was the main source of money for Binder's firm, but stressed that "VV should have secured its money flow from SE, since the company on its own is not able to pay off the loans."

Binder stressed that VV has not wasted the funds from the loans but has invested them in an effective way into the construction of hydro-electric power plants that will be able to pay off the invested funds by energy production.

The second one was a $200 million Eurobond instalment concluded in October 1996, priced 115 b.p. above the yields of ten year U.S. government bonds. 60% of this Eurobond issue was placed on the U.S. market.

Binder said that VV could eventually repay the credits, but that everything depended on the SE. "If the SE pays everything back, we can have all loans paid by 2004," he said, explaining that Gabčíkovo power plant creates an annual profit of 4 billion Sk for VV while the Žilina dam brings in another half billion Sk.

However, a financial crisis that is gradually creeping over the construction industry may change Binder's plans. Miloš Blanárik, director general of the Association of Slovak Construction Developers (ZSPS), told a news conference in Bratislava on December 2 that investor organizations representing the state have not settled over 7 billion Sk ($194 million) in invoices for construction firms since July 1998.

At an average profitability of 5%, construction firms lack cash and are unable to pay for even basic input materials or wages for their employees. "Although the state owes businessmen money for jobs done based on state orders, firms currently have no money for VAT transfers and payments to social and health-care funds and insurance companies. They are becoming insolvent, and the threat of the confiscation of property hovers over them despite signed contracts and sufficient orders," said Blanárik.

If the issue of outstanding payments for public investments is not settled soon, the ZSPS director general expects 20,000 employees of construction firms to be laid off.

While VV has not announced any prospective job cuts, waterworks construction company Váhostav said on December 1 that it planned to lay off 900 workers out of 3,825.