Steelmaker VSŽ Holding, the largest Slovak company and once the nation's mightiest industrial force, failed to repay a $35 million syndicated loan on November 9. Although the company said it was continuing to negotiate with its creditors, the de facto default was the most tangible sign to date of the company's financial distress.
With VSŽ in deep trouble, the Slovak government suggested a November 10 meeting with company management to discuss solutions, including possible state guarantees for company debts. The stakes were enormous, for if VSŽ went bankrupt, Slovakia would face a social explosion as another 25,000 workers joined the country's long unemployment lists. 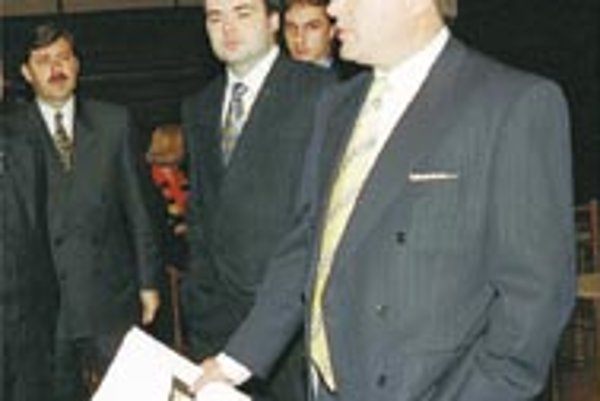 Font size:A-|A+  Comments disabled
Steelmaker VSŽ Holding, the largest Slovak company and once the nation's mightiest industrial force, failed to repay a $35 million syndicated loan on November 9. Although the company said it was continuing to negotiate with its creditors, the de facto default was the most tangible sign to date of the company's financial distress.

With VSŽ in deep trouble, the Slovak government suggested a November 10 meeting with company management to discuss solutions, including possible state guarantees for company debts. The stakes were enormous, for if VSŽ went bankrupt, Slovakia would face a social explosion as another 25,000 workers joined the country's long unemployment lists.

The meeting produced little immediate agreement. "I don't think bankruptcy is the answer. In my view, there is still enough room for negotiations, both with the creditors and the government," said VSŽ spokesman Jozef Marko. Finance Minister Brigita Schmögnerová, however, was not inclined to open state coffers to bail out the troubled firm. "I don't think government will provide any blank check guarantees," she said.

Stock analysts who have charted VSŽ's development for years said that in the end, a state bailout for VSŽ was indeed unlikely, because of the company's close ties to the former government of Premier Vladimír Mečiar (see Cagala interview, below). Company representatives remained tight-lipped, saying they would study the cabinet's proposals but could not comment until their talks with their creditors had concluded.

The defaulted credit, arranged by Merrill Lynch, was signed in November 1995 as a seven-year loan, but allowed for early repayment before 2002. The loan was aimed at financing the modernisation of VSŽ's production of sheet steel used for making cars, and for scrubbing equipment on blast furnaces. Despite the seven-year repayment schedule, however, Merrill Lynch decided to recall the loan after three years.

"Although nobody would have said in 1995 that the banks would have used their right to collect after three to five years, today it's just natural that they did," said Martin Kabát, an analyst with Bratislava brokerage firm Slávia Capital.

Kabát explained that Merrill Lynch's decision was not only in line with the recent tendency of creditors to hedge their exposure in emerging market economies, but it also was a measure of VSŽ's poor financial outlook.

Corporate analysts said that the decisive elements in the VSŽ saga were global factors such as the world crisis in metallurgy and the Russian finance crisis. "Among the causes of the crisis at VSŽ is the fall in prices in the metallurgy sector," said Ivan Chodák, an analyst with CA IB Securities. "This is mainly connected with products from Asia and Russia, where VSŽ used to be strong."

On the domestic front, poor management and unwise diversification projects had undercut VSŽ's financial strength. Kabát remarked that under the current management, "the company has atomised into a number of small firms, which made it very difficult to control."

Kabát also said that investments into non-core businesses had been foolhardy. "Early in 1998, maybe they thought everything was great, but they didn't think ahead and they created no reserves. Now we can see the result of this behaviour."

Among the non-core businesses VSŽ became involved in were financial institutions (see chart this page) and unrelated activities like sports, media and housing construction.

VSŽ entered the media market with the acquisition of Národná Obroda, one of the leading dailies in Slovakia. It also owns several regional newspapers. In the field of sports, the company owns the top Slovak hockey team, HC Košice, soccer squad 1st FC Košice, and the prestigious Czech soccer team Sparta Praha.

According to Chodák, VSŽ's future now depends on the extent to which VSŽ will be able to refinance production with a higher added value. "VSŽ will have to produce high quality refined metal products like tin-alloy sheets to keep their ability to compete on the market," he said. "Another necessity is higher foreign investments, which should lead to joint ventures like VSŽ-US Steel."

Besides focussing on higher value-added production, said Jozef Lukáč, an analyst with Capital Partners Consulting, VSŽ would have to focus more strictly on metallurgy and stop meddling in non-core activities. "The only possible way is to withdraw from these positions now," he said.

VSŽ representatives have themselves agreed that the company would have to get rid of non-essential activities and make radical cuts in the number of employees.

"Everything that doesn't go together with metallurgy is for sale," said VSŽ President Július Rezeš at a November 5 press conference, predicting that the company would likely be in the red at the end of the year despite its 683 million Sk ($19 million) after-tax profit for the first nine months of 1998.

The company has also undertaken to make deep cuts in its ownership portfolio. The number of non-profitable companies owned by VSŽ Holding stands at 137, company management revealed at the press conference. "These firms are just millstones around our necks," said VSŽ vice president Jozef Bušša.

The social costs of VSŽ's restructuring programme may be high. "Concerning the recent problems and changes required to make VSŽ a prosperous company again, firing 2,000 out of 25,000 would just be a beginning. The next steps will become clear after the company sees whether its restrictions were effective or not," said an analyst with a foreign financial institution who requested anonymity.

WAYS TO SAVE VSŽ FROM BANKRUPTCY