With tears in his eyes, Premier Vladimír Mečiar bade farewell to a national television audience on September 30. In a bizarre address to citizens, Mečiar told the country that the election defeat of his ruling HZDS party was "a loss for the Slovak people," and finished by singing viewers a song. "I never hurt any of you," the Premier crooned.
Mečiar's final appearance on his regular state television program, 'What's next Mr. Premier?", touched off a furious round of speculation as to whether the emotion he displayed was genuine or contrived, and whether his announced decision not to participate in attempts to form a new government signalled his permanent departure from politics. 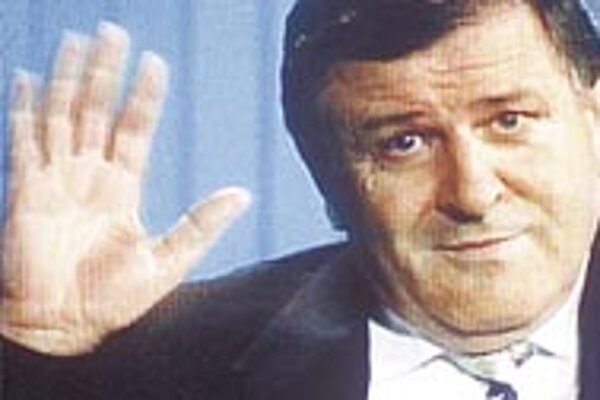 Font size:A-|A+  Comments disabled
With tears in his eyes, Premier Vladimír Mečiar bade farewell to a national television audience on September 30. In a bizarre address to citizens, Mečiar told the country that the election defeat of his ruling HZDS party was "a loss for the Slovak people," and finished by singing viewers a song. "I never hurt any of you," the Premier crooned.

Mečiar's final appearance on his regular state television program, 'What's next Mr. Premier?", touched off a furious round of speculation as to whether the emotion he displayed was genuine or contrived, and whether his announced decision not to participate in attempts to form a new government signalled his permanent departure from politics.

"I would be very happy if this were indeed the end of the Mečiar era," said Miroslav Kusý, a political science professor at Bratislava's Comenius University, "but his words and acts are so often in contradiction. He said he would not accept his Parliamentary mandate, but over one million people trusted him and voted for him, so he will probably feel a lot of pressure to remain in political life."

Grigorij Mesežnikov, a political scientist working with the Institute for Public Affairs (IVO), said that "I don't think he would leave politics, because his Movement for a Democratic Slovakia [HZDS] would not survive without him." Although an opposition role did not suit Mečiar, Mesežnikov said, the Premier would likely find a way to remain in politics and make life difficult for his political enemies. "As chairman of the HZDS, he's preparing himself for a tough battle [with the parties of the former opposition]."

The most frequently suggested means for Mečiar to re-enter high-level politics is through the Presidency, which has been vacant since Michal Kováč left office on March 2. The four parties of the former opposition, which control 93 of 150 seats in Parliament, have promised to pass a law providing for the direct election of the President by Slovak citizens, but actual Presidential elections will take up to two years to organize.

Analysts said that this two-year period would be a dangerous one for any new government, which would have to deal with a floundering economy and an impatient citizenry whose purchasing power was plummeting. Were Mečiar to stand for election during an economic crisis, they said, he might very well recapture the faith of voters disillusioned with life under the new government.

"If the current opposition pushes through the direct election of the President, I cannot imagine anyone else who could better use public opinion to his own advantage and address the necessary majority of people than Mečiar," said Fedor Gál, founder and leader of Slovakia's first post communist political party, the now-defunct Public Against Violence (VPN).

Gál and Mečiar were originally VPN colleagues, but fell out when Mečiar led a group of deputies out of the VPN in 1991 to form the HZDS. "What I know for sure is that he is a man of power," said Gál, "and I think the only position that Mečiar could be seeking is that of President."

Kusý, who also served with Mečiar as a VPN deputy from 1990-1992, felt less sure that Mečiar would be able to carry the vote in possible Presidential elections, but said that even if the Premier did not return to political life in a significant role, the legacy of the 'Mečiar era' would survive for some time to come.

"We have to distinguish between Mečiar and 'Mečiarism'," he said. "The latter is characterized by a primitive style of politics, by populism and disregard for legal structures, and it will last in Slovakia long after Mečiar's departure."

But many political analysts and psychiatrists have said that the political paranoia and polarisation fostered by 'Mečiarism' was an expression of the fragile mental health of the man himself. The Slovak Psychiatrists' Conference on May 22 sent Mečiar a public letter expressing concern about his "compulsive urges to govern and manipulate others," and advised him to "stop transfering [his] own conflicts, passions and views of the world on to the population."

In a four and a half hour pre-election interview with the German magazine Stern, Mečiar did nothing to reassure observers that his mental stability had improved.

"Sometimes I don't sleep for three or four nights," the Premier told reporter Niklas Frank. "I'm a walking brain which sometimes stops for food." Asked about his reputed mistresses, Mečiar answered "if we got rid of all the politicians who engaged in adultery, then impotence would be the sign of successful politicians, and that's not normal." Describing the place he filled in political life, the Premier said "you know what it's like to be at the summit when beneath you is only air."

Added to his maudlin singing on STV, Mečiar's Stern interview convinced many observers that the time had finally arrived for the Premier to leave politics. Lubomir Nábělek, director of the psychiatric department at Banská Bystrica's Roosevelt Hospital, called Mečiar's final STV appearance "a picture of poverty and sorrow," and said that "the Premier exceeded all expectations. He was highly theatrical, and the lies and evasions he told were dangerous."

"Mečiar must now admit to himself that 70% of people told him 'No' in the last elections," explained Gál, "and this is the reason for that pitiful exhibition on STV."

Mečiar, for his part, told his viewing audience he would not be back as a Parliamentary deputy. "I can't take my seat when you've taken everything from me," he told citizens. "You've offered me the role of a member of Parliament, which I can't do anything with...So what can I say now at the end? I've always enjoyed life, I've lived and worked to the fullest, I've given you everything. What can I say? Come on, let's sing."