The six international show-biz stars who came to Slovakia in September to support Premier Vladimír Mečiar and his HZDS party were not bought with Slovak money alone.
French corporate 'sponsors' of Mečiar's government were behind the visits of German supermodel Claudia Schiffer, actors Gérard Depardieu and Ornella Muti and race driver Paul Belmondo, according to Jean-Daniel Angibaud, the Bratislava-based French entrepreneur who arranged every visit.
In an interview with The Slovak Spectator, Angibaud said that through his company Léa Productions, private companies "gave me the responsibility of promoting the image of Slovakia. 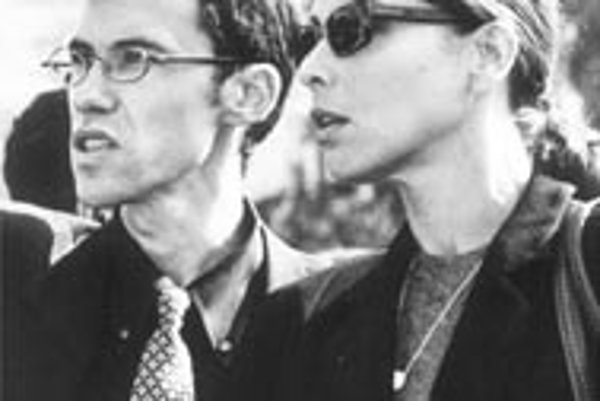 Font size:A-|A+  Comments disabled
The six international show-biz stars who came to Slovakia in September to support Premier Vladimír Mečiar and his HZDS party were not bought with Slovak money alone.

French corporate 'sponsors' of Mečiar's government were behind the visits of German supermodel Claudia Schiffer, actors Gérard Depardieu and Ornella Muti and race driver Paul Belmondo, according to Jean-Daniel Angibaud, the Bratislava-based French entrepreneur who arranged every visit.

In an interview with The Slovak Spectator, Angibaud said that through his company Léa Productions, private companies "gave me the responsibility of promoting the image of Slovakia." He refused to reveal what he or the stars had been paid for their efforts, but said that "there was private money involved, French, Slovak and Italian. They had their own reasons for investing the money."

One of the French companies that was clearly identified as having paid for Schiffer's visit was the car maker Citroen. "I was very lucky to get Claudia [for a highway opening ceremony with Mečiar], because she had many other offers," said Angibaud. "Schiffer is under official [promotional] contract with Citroen, and I used a commercial visit that she was already making to Trenčín on Citroen's behalf to cover her appearance."

Schiffer told the French TV station Canale Plus on September 29 that "it wasn't me, it was Citroen. I don't ask questions, I just do my job."

The Slovak private radio station Twist reported on September 10 that Schiffer's visit cost five to seven million Sk ($143,000-200,000). The report sparked an uproar among opposition politicians and the Slovak media, who accused Mečiar of having thrown away millions of Slovak crowns in public money to promote the HZDS campaign.

Mečiar immediately denied that the visits were paid with state money. "My friends in Europe helped me to bring such influential personalities to Slovakia," Mečiar said at a HZDS rally in the eastern Slovak town of Humenné.

Marián Kardoš, Mečiar's spokesman, told the French daily Le Figaro that the visits had not cost Slovak tax payers a penny. "The people who paid are sponsors of Slovakia and foreigners, among whom are French companies," said Kardoš. He said that the companies had approached Mečiar on their own. "It was on their own initiative, we did not ask for anything," he said.

Le Figaro reporter Stephane Kovacs fingered the private French nuclear agency Framatome and the public utility Electricité de France as having been behind the scheme, but the companies publicly denied the allegations. Both firms have been involved in the construction of Slovakia's Mochovce nuclear plant.

Gérard Depardieu, who greeted crowds at a HZDS rally in Košice on September 20, told Slovak state-run STV that he had been persuaded to attend the rally with Mečiar by Jacques Attali, former aide to French President Francois Mitterand and former President of the European Bank of Reconstruction and Development (EBRD). The EBRD also played a significant role in the Mochovce project from 1993 to 1995.

But Michel Duger, head of the French Trade Delegation to Slovakia, denied that French companies had been involved in the visits of the stars. "This is a mistake, and it comes from Slovak people," he said. "Before the elections, the people of the HZDS were trying to find sponsors, and maybe it was better to say they had foreign sponsors."

Duger also disowned Angibaud, saying that "he is under contract to Slovakia for publicity and media. By chance, Mr. Angibaud is French, but he could be English or Italian. And of course, he knows Depardieu better than he knows Rex Harrison."

Duger and Angibaud both denied that French state companies or public money had been used to pay for the visits. "France has very strict rules to prevent public money from being used to support foreign political campaigns," said Angibaud. Duger, however, declared that France had a "special interest" in Slovakia both geopolitically and economically.

"Czechoslovakia was created by French people, by [President Georges] Clemenceau in 1920," Duger said. "It was destroyed by the Americans and the Russians at Yalta [1945 World War II peace conference]. The first foreign embassy in Slovakia after 1993 was French. These [Slovak] people remember these things."

Duger also said that France had deep economic interests in Slovakia. "We are very close to this country, and we are in competition with other European countries. Everywhere we can sell we will sell. It's normal."

Angibaud said that he had sincerely been trying to help Slovakia and Mečiar improve their images abroad. "Slovakia is not lost, it's not on the black list of Europe, and neither is Mečiar. The Italian Prime Minister [Romano Prodi] supports him openly. He has been received four times by [French President] Jacques Chirac. That means something."

But Slovak political analysts said that the high-profile visits and lavish campaign of the Slovak Premier may have cost him dearly at home, if not abroad. Mečiar's HZDS party won the elections, but lost 18 seats in Parliament and currently stands little chance of forming a new government.

"The campaign was too bombastic, and people are touchy when it comes to their decreasing living standards while millions are thrown away for such a parade," said Marián Velšic, an analyst at the Institute for Public Affairs. Velšic expalined that numerous HZDS supporters had changed their minds when the party's top representatives appeared alongside rich show-biz stars, flaunting a life-style ordinary people could never afford. "In this way, the whole campaign worked counterproductively," Velšic said.

A Žilina cab driver, taking a fare to a HZDS rally on September 23, bore out Velšic's words. "Four years ago I voted for Mečiar," he said, "but not this time. He's just throwing money into the Danube at a time when ordinary people barely have enough money to eat or buy medicine."