Slovakia's international relations with Hungary took a turn for the worse over the weekend of September 11-12 at a meeting of the heads of state of seven central European countries.
At the Prague summit of the Central European Free Trade Agreement (CEFTA) , Slovak Premier Vladimír Mečiar suggested for the second year in a row that Bratislava be given the nod as CEFTA's first administration centre. But his hopes were again doused when Hungarian Premier Viktor Orbán vetoed the Slovak proposal.
"We didn't react to any Slovak statements or initiatives," said Orbán after the summit. 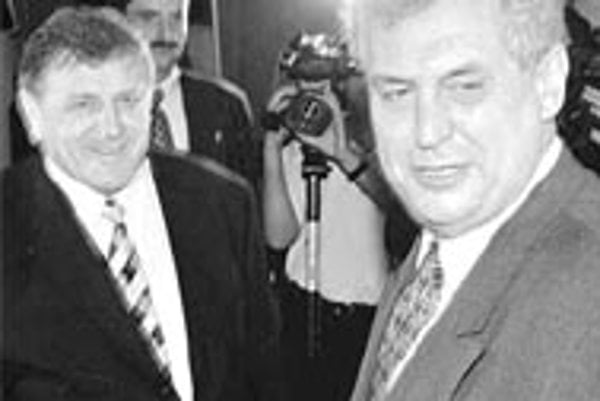 Font size:A-|A+0
Slovakia's international relations with Hungary took a turn for the worse over the weekend of September 11-12 at a meeting of the heads of state of seven central European countries.

At the Prague summit of the Central European Free Trade Agreement (CEFTA) , Slovak Premier Vladimír Mečiar suggested for the second year in a row that Bratislava be given the nod as CEFTA's first administration centre. But his hopes were again doused when Hungarian Premier Viktor Orbán vetoed the Slovak proposal.

"We didn't react to any Slovak statements or initiatives," said Orbán after the summit.

Peace at the summit was already doomed before the arrival of Slovakia and a belligerent Hungary. On September 4, Slovakia had requested the International Court of Justice at the Haague to re-issue a verdict criticial of Hungary over the controversial Gabčíkovo waterworks. And then, on the morning of Friday September 11, Orbán awoke to discover that Slovakia had slapped a 70% tariff on Hungarian wheat.

"There was no negotiation before the Slovak decision, and I just informed all the Premiers [in Prague] that in response, the Hungarian government must initiate the proper procedure before the World Trade Organization [WTO]," said Orbán.

The Slovak position was that Hungary had been dumping its wheat on the Slovak market over the last year. Milan Pakši, from the trade policy section of the Slovak Agriculture Ministry, said that "Hungarian wheat imports into Slovakia in the first half of 1998 were more than triple the volume of last year's imports."

Mečiar boasted on state-run Slovak TV before the summit that Slovak agriculture fulfils the conditions for EU membership better than do other EU associate countries like the Czech Republic, Hungary and Poland. Foreign investors have invested twice as much in the Slovak agricultural sector in the first six months of 1998 as during the whole of last year, he said.

In a bid to protect domestic producers, the Agriculture Ministry's Pakši said, Slovakia had increased the duty on Hungarian wheat by 70% (2,540 Sk, or $70, per tonne) without notice on September 10. Mečiar himself criticized Polish and Hungarian trade restictions at the summit, while Mečiar spokesman Marián Kardoš said that "Hungary did not act correctly" in selling its wheat exports at dumping prices.

But Orbán reacted angrily to the Slovak argument, saying that Hungary would appeal the tariff to the WTO. WTO regulations say that no country can impose a duty exclusively on another country. "We didn't say anything about Slovakia's returning to the Haague Court," Orbán began. "But there is a threshold which even the Slovak government cannot cross - this threshold is agreements with big international organisations such as the WTO. The Hungarian government, representing the interests of its citizens, cannot let the matter drop without a response or countermeasures."

Slovakia found support for its tariff in other quarters at the summit. Polish Premier Jerzy Buzek supported Mečiar's position, saying that liberalising trade in agricultural products within CEFTA would overwhelmingly favour Hungary.

Mečiar had been supposed to meet Buzek privately in Prague, but "it was only discussed," said Kardoš. Jakub Galenski of the Polish Government' s information service said before the summit that "it is evident that the Poles are interested in meeting the Slovak Premier."

In the end, Mečiar had only one bilateral meeting before rushing back to Bratislava after his spat with Orbán. The Slovak Premier met the new Premier of the Czech Republic, Miloš Zeman, to discuss the division of the federal property of the former Czechoslovakia. "Both Premiers stated that it is necessary for both sides to resolve the issue. The continuation of the work of the joint commission [set up to resolve the issue, but abandoned in 1993] is a first step towards fulfilment of this aim," Kardoš said, but declined to specify exactly when the process might be re-started

CEFTA is a seven-member trade group designed to liberalise trade between member countries, which include Slovakia, Slovenia, Rumania, Bulgaria, the Czech Republic, Hungary and Poland. The Prague summit dealt mainly with agriculture, trade liberalisation and the inclusion of Bulgaria as a new, seventh member.

Mečiar, whose government has been criticized by the EU and the US for backsliding on democracy, has tried to push forward trade liberalisation within CEFTA. Together with the Polish and Czech Premiers, he not only advocates the freer flow of goods but also of capital within CEFTA countries, and promotes joint investments outside the organisation.

The next annual summit is scheduled for Budapest in fall 1999, but is unlikely to produce a truce in the grudge match between Slovakia and Hungary. "I am against discussing political issues under the Hungarian presidency next year," Mečiar said in Prague.