In September, the sound of revelry in Slovak pubs can rise to astounding levels. Never fortresses of sober reflection, the nation's taverns now swell with red-faced citizens ladling down a murky, yellowish concoction with noisy gusto. 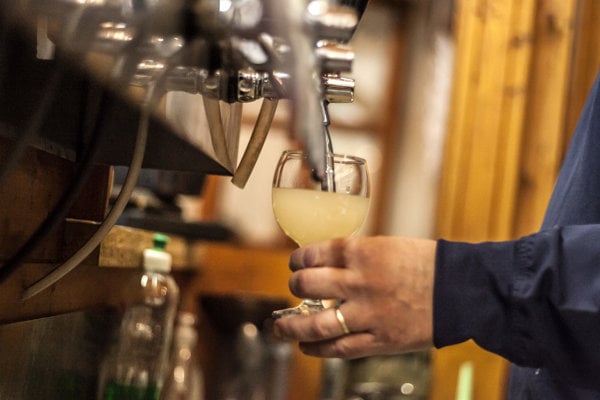 The life of the party is a cloudy grape cider called burčiak. It looks and tastes innocent enough, but packs a devastating punch, as Slovaks are delighted to point out. "People drink it like water, then flop around like fish," explained Juraj Svetlý, a veteran of the Vinobranie festival where burčiak first makes its appearance (see article this page).

The deceptive beverage occurs at a natural stage of white wine making. About a week to ten days into the fermentation process, the sugary white grape juice turns cloudy, frantically bubbling and fizzing. This is burčiak, an ephemeral drink which must consumed almost as soon as it is ready.

In a matter of hours, the wild fermentation transforms the sweet grape spritzer into a drier cider or, in some unfortunate cases, vinegar: The short shelf-life of the beverage charges the festival atmosphere with a "no-tomorrow" euphoria.

Burčiak's sweet, natural, intoxicating flavor lures drinkers into danger. The cumulative effect of several drinks, a.k.a. "the burčiak curse," creeps up on them later after several glasses of the stuff. Although its average alcohol content of 5% is only half that of mature wine, burčiak continues to ferment just as merrily inside the drinker's stomach. The continued fermentation, combined with a "bubbly-champagne" effect, give burčiak its infamous one-two punch.

Every Vinobranie celebration has its share of casualties - the comatose, the weaving, the slumped, the loose of limb and tongue. According to Pavol Kvetko, one Modra wine-maker, burčiak's intoxicating power is often augmented by the place where it is drunk. "People drink it in cellars where there are many gases present, and when they leave they become dizzy," he explains. At any rate, he added, it's a great source of vitamins B and C.