While to many political experts the Slovak Parliament's failure for the ninth time to elect a President means it is almost certain that the country's leadership deadlock will continue until September's national elections, two ruling coalition parties don't seem to be listening to the pessimistic vibes.
The two parties - the Slovak National Party (SNS) and the Movement for a Democratic Slovakia (HZDS) - have submitted constitutional amendments in an attempt to force a successor as president, but legal experts claim that neither idea really solves the problem. 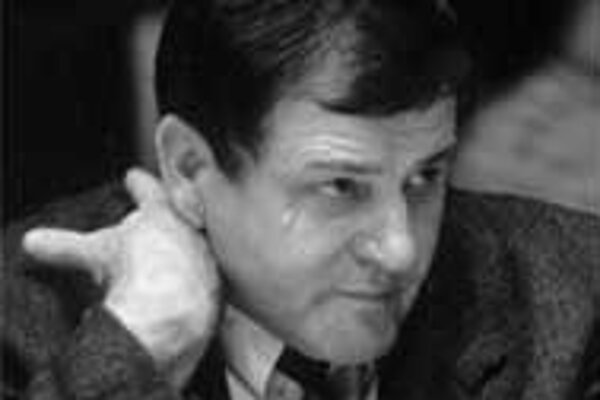 Font size:A-|A+  Comments disabled
While to many political experts the Slovak Parliament's failure for the ninth time to elect a President means it is almost certain that the country's leadership deadlock will continue until September's national elections, two ruling coalition parties don't seem to be listening to the pessimistic vibes.

The two parties - the Slovak National Party (SNS) and the Movement for a Democratic Slovakia (HZDS) - have submitted constitutional amendments in an attempt to force a successor as president, but legal experts claim that neither idea really solves the problem.

Slovakia has been without a president since last March 2 when President Michal Kováč stepped down after completing his term of office. All but four of his powers were taken over by Premier Vladimír Mečiar. However, the right to appoint and remove cabinet members did not devolve to anyone.

The SNS wants to entrust that right to Ivan Gašparovič, Parliament's Speaker and a long-time ally of Premier Vladimír Mečiar, while Mečiar's and Gašparovič's HZDS maintains that it should be Mečiar who, if his government were supplanted, would submit his cabinet's resignation to himself.

While all parliamentarians seem to agree that a solution is needed, opposition deputies who can block the government's constitutional majority if united, prefer the SNS solution. "It is inevitable that a law will be passed securing the transition of presidential powers to the Parliamentary Speaker," said Róbert Fico, a member of the Parliamentary Constitutional and Legal Affairs Committee for the opposition Party of Democratic Left (SDĽ), adding that the SNS variant was "the easiest way to avoid a constitutional crisis."

The SDK, the strongest opposition party, is of the same opinion. Ivan Šimko, an SDK legal expert and a member of the same committee, said the SNS way would not grossly meddle with the constitutional system and therefore is acceptable. "This is the most elegant solution, and we have no reservations about it," he said.

However, Katarína Zavacká, a legal expert with the State and Law Institute at the Slovak Academy of Science, pointed out that the SNS proposal does not try to limit the time without a president to the shortest possible period, but instead uses the term "at that time [time without a president]," while not defining how long that "time" may last. "[The current government coalition] could say 'we don't need a President' and keep going on with the present state of affairs for however long they want," she said.

On the other hand, Ernest Valko, another legal expert and the last chairman of the Czechoslovak Federal Constitutional Court, said that there was no constitution that would limit such a transition period, because "in democratic countries, people count on the quickest possible solution of a transition period. If the period lasts for as long as it does here, the credibility of constitutional bodies becomes doubtful," he added.

Valko continued that an "even more stupid" way of handling the situation is the HZDS proposal, which introduces some elements of the German chancellor system. However, the German model's "Slovak alternative" as Valko christened it, would only be using one part of it, namely that the Prime Minister is removed by Parliament after the Cabinet submits its resignation to him as an acting President.

"If I decide to change one article of the Constitution, I have to consider what will happen to the other articles, but [the HZDS] didn't take this into account," Valko said. He added that an important element of the chancellor system that failed to be included in the HZDS proposal was the so- called "positive destruction," which means that the former chancellor cannot be removed without simultaneously appointing a new one. In other words, the new chancellor has to be elected by the time the old one leaves.

So, if after the elections Parliament removed Mečiar, which according to the Slovak Constitution means removing the entire government and at the same time was not able to decide on his successor, not only would Slovakia not have a President but it would also lack a Prime Minister.

Furthermore, neither of the two proposals deals with the transfer of the last presidential power, which according to Article 102, letter d) is the power to dissolve Parliament and announce new elections. In that scenario, Slovakia could become a country of anarchy with no president, no premier, no cabinet, and a parliament that cannot be dissolved, some legal experts fear.

"This proposal is absolutely unacceptable," Fico said. "The SDĽ rejects such meddling with the Constitution."

Peter Brňák, a HZDS member and Chairman of the Parliamentary Constitutional and Legal Affairs Committee, is convinced that this blend of parliamentary and chancellor systems would even be more convenient, because it would make Slovakia "an exceptional country. The Constitution of every country is somehow exceptional," Brňák added.

However, Zavacká doubted that the new Parliament, which most probably will be no less polarized that the current one, would find the will to elect the new President. "Simply, the state's interest in society is ruled by political interests," she said.