Premier Vladimír Mečiar is determined to win the up coming national elections regardless of what it takes, even if it means using campaign methods hardly imaginable in a democratic regime.
Some propaganda weapons of Mečiar's Movement for a Democratic Slovakia (HZDS) includes, bringing the HZDS flag to the summit of Mount Everest, causing Slovaks and foreigners to chuckle. Others, such as forcing the Czech soccer champions to wear HZDS jerseys during a promotional soccer game, causing them embarrassment. Yet others are plain illegal, such as unauthorized usage of Slovak Army helicopters during a party booster. 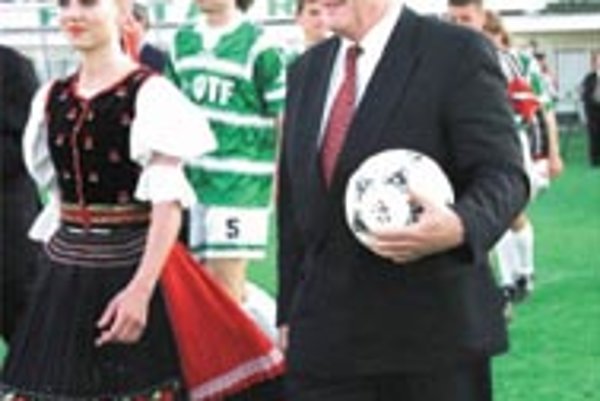 Font size:A-|A+  Comments disabled
Premier Vladimír Mečiar is determined to win the up coming national elections regardless of what it takes, even if it means using campaign methods hardly imaginable in a democratic regime.

Some propaganda weapons of Mečiar's Movement for a Democratic Slovakia (HZDS) includes, bringing the HZDS flag to the summit of Mount Everest, causing Slovaks and foreigners to chuckle. Others, such as forcing the Czech soccer champions to wear HZDS jerseys during a promotional soccer game, causing them embarrassment. Yet others are plain illegal, such as unauthorized usage of Slovak Army helicopters during a party booster.

Right from the start, the HZDS unorthodox campaign was aiming extremely high, literally. On May 19, two Slovak climbers erected the HZDS blue, red and white standard at the top of Mount Everest. Vladimír Zboja and Peter Hámor, who were part of a joint Slovak-Chinese expedition, took one of the easiest routes to the mountain's summit. Moreover, the Chinese did so with the support of additional oxygen (rightly so), which their Slovak colleagues branded as a pitiful performance.

"We were disgraced with such a precedent set by Slovak mountaineering," said Marián Šajnoha, President of IAMES, Slovakia's biggest mountaineering club. He added he was not aware of any world climbing tradition to register a political party placing its flag on the Roof of the World.

Hámor explained that the deal concerning the placement of the flag on the mountain top had been made with the HZDS as the expedition's sponsor. "From our point of view, it was a purely sporting issue," he said for the Slovenská Republika daily. "Obviously though, the sponsor had further intentions."

Hámor and Zboja raised two flags on Everest - the Slovak one and the HZDS one. While a picture of the former already appeared in Slovenská Republika, the latter is expected to headline the HZDS televised election campaign.

Šajnoha explained that the move has divided the Slovak mountaineering society into two camps of supporters and knockers. Šajnoha belongs to the latter. "Every one has the right to have a political opinion, but it certainly does not belong to sporting activities," he said.

Another controversial step was taken by HZDS campaign managers on June 5 in the eastern Slovak town of Prešov, where the reigning Czech soccer champion Sparta Praha, was forced to play an exhibition game against the local team wearing white and blue jerseys with letters "HZDS" emblazoned on their chests.

Shortly before the benefit game, officially organized to honor the 100th anniversary of the local club Tatran Prešov, Alexander Rezeš, HZDS campaign manager and majority owner of the steel giant VSŽ, which owns the Prague club, appeared in the Sparta locker room and ordered the players to strip off their original red jerseys and put on the HZDS ones.

"It made my jaw drop," said Tomáš Řepka, Sparta and Czech national team defender. "It was a pretty big clown show." Řepka asserted the team was abused for the use Mečiar's campaign and many players would have refused to play if they knew about Rezeš's plans. "Speaking for myself, I felt like a nerd," Řepka said.

But Horst Siegel, Sparta team captain, said that the players tried to treat the situation as professionals. "We went there to play football, and we did not care what jerseys we played in," he said. However, after all they lost 2:3 to Tatran, the tenth team of the Slovak first division.

Club officials believed the club's reputation was harmed, not by the involuntary stripping, but by the defeat. "We make our name by the way we play, and with the results we achieve," said Ján Zachar, Sparta Soccer Club General Director. He said the club was sorry that they lost the match, but felt no regrets for doing a favor to Rezeš. "You have to understand that we are not only a sports club, but we are also Rezeš's club," added Zachar.

Sparta manager Ivan Horník admitted that he and some of the players knew that the club would play for the HZDS, but said that the idea of the jerseys appeared in the locker room minutes before the game. "We were asked to do it, and we just did not think about it in a negative way," he said.

Despite numerous efforts to reach HZDS campaign manager Alexander Rezeš or HZDS campaign team member Ivan Mjartan, neither of the two officials was willing to be interviewed on the matter.

Originally, Mečiar was supposed to play along with Sparta players, but in the end, he gave a mere speech instead of a performance. While he spoke, 15,000 amazed spectators in a sold-out stadium lifted their eyes to a fleet of three combat Mi-24 helicopters which flew over the site at an altitude of just 200 meters.Marián Dzurilla, Prešov Military Air Base Commander who stood at Mečiar's side, waved to the helicopters, whose pilots were carrying out his orders.

But his superiors were less impressed. According to the June 16 statement of the General Staff of the Slovak Army, the overflight "grossly contravened safety measures". The statement added that combat air craft and helicopters must not fly over inhabited areas, including occupied sports stadiums.

Dzurilla declined to comment when approached by The Slovak Spectator on June 22. At a press conference the same day, Štefan Gombík, Slovak Air Force Commander at the General Staff, claimed that the flight was in accordance with the safety rules, adding that Dzurilla was fully competent to give such an order. Ironically, right after the fly-over Dzurilla stated for the press that he did not know about it.

Jozef Tuchyňa, Chief Commander of the General Staff, charged that Dzurilla was responsible for the flight which he had ordered. "This matter will end up before the military court," Tuchyňa said coarsely.

Even Mečiar's coalition partners were angry over such wilfulness. Ján Slota, Slovak National Party Chairman and Parliamentary Defence and Security Committee Chairman, told the opposition daily SME that Gombík's statement was highly inappropriate, especially when he was sitting at the press conference with his highest commander. "I agree with [General Tuchyňa] that the whole case should end up with disciplinary punishment of the responsible persons," Slota said.

The Generals' diverse opinions triggered speculations about the reliability of the Slovak Army, which for the past several years has consistently proven to be the most trusted state institution among the general public.

But Tomáš Švec, General Staff Spokesman said that the Slovak Army "is and will remain non partisan. Political powers may wish to push it wherever they want." He added that no matter which political officials may interfere with the ongoing investigation by the Military Police, Tuchyňa will have the last word.