Four months before Slovakia's national elections, ruling coalition deputies pushed through a controversial election law amendment which turns the country into a single electoral constituency, restricts the right of political parties to form coalitions and forbids campaigning in private media.
Opposition parties described the bill as undemocratic, and said that it violated the fundamental rights of assembly and access to information, as well as right to freedom of speech. The measure, they charged, had been designed to pave the way to election victory for the Movement for a Democratic Slovakia (HZDS) of populist Premier Vladimír Mečiar. Ruling coalition representatives fired back that the law was perfectly democratic. 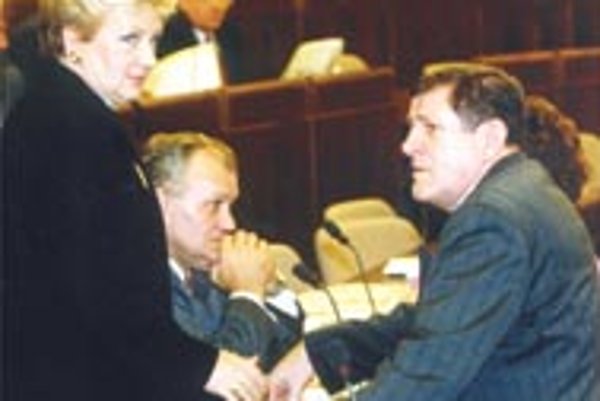 Opposition parties described the bill as undemocratic, and said that it violated the fundamental rights of assembly and access to information, as well as right to freedom of speech. The measure, they charged, had been designed to pave the way to election victory for the Movement for a Democratic Slovakia (HZDS) of populist Premier Vladimír Mečiar. Ruling coalition representatives fired back that the law was perfectly democratic.

"The bill meets all requirements for free and democratic elections," said Ivan Gašparovič, Parliamentary Speaker and a member of the ruling HZDS. Gašparovič praised the fact that the law had been approved relatively smoothly. Of the 144 deputies present, 78 voted in favor of the amendment, while 62 voted against, three abstained and one didn't vote. All the deputies who supported the bill belonged to the parties of the ruling coalition - the HZDS, the ZRS labor party and the far-right SNS - with the exception of two independent deputies who have consistently voted with the government.

Opposition leaders unanimously disagreed with Gašparovič's evaluation. Peter Weiss, vice-chairman of the reformed communist SDĽ party, said that the bill was not based on an agreement between the governing coalition and the opposition, but on an accord among coalition parties only. "The governing coalition forced the opposition parties to accept the rules of [election] competition by the power of its votes," he said.Mikuláš Dzurinda, leader of the opposition SDK bloc, said that the law "was born in a non-democratic workshop and in a non-democratic head." Milan Kňažko, Vice-Chairman of the liberal DÚ party which forms a part of the SDK, added "I would call [the law] 'HZDS guidelines for winning the elections'."

But Ján Cuper, a HZDS MP and a strong backer of the amendment, said that the law discomfits only "the SDK - [the party of] political losers."

The SDK did indeed have serious problems in accepting the new law. Together with another coalition party, the Party of the Hungarian Coalition (SMK), the SDK singled out for criticism a provision that requires that each party within a coalition win five percent of the overall public vote in order to secure Parliamentary representation. Although the government maintained that the provision had been designed to reduce the number of small parties in Parliament, the opposition argued it was intended merely to outlaw coalitions.

Under the new coalitions provision, the SDK, which unites five opposition parties, would have to gain at least 25% of the popular vote. Although at the beginning of 1998 the SDK was consistently scoring more than 30% voter support in opinion polls, ever since the creation in March of a new party, the left-leaning SOP, its support has fallen below 25%. Similarly, the SMK, a coalition consisting of three ethnic Hungarian parties, would have to attain at least 15% support according to the new law, even though ethnic Hungarians make up only 11% of Slovakia's population.

Feeling threatened by the proposed amendment, both the SDK and SMK decided in April to transform themselves into single parties to circumvent the 5% provision. But the passage of the law appeared to shake the confidence of some SDK members - DÚ chief Jozef Moravčík began to backpedal from the idea of a single SDK, stating it would actually be easier for the SDK to enter the election campaign as a coalition between its two strongest parties, the DÚ and the KDH Christian Democrats.

But Dzurinda, also a KDH Vice-Chairman, strictly refused such suggestions, saying the four parties of the SDK had already decided to unite, and were awaiting only the agreement of the DÚ. "The SDK will enter elections with a joint candidate list, and will easily cope with the current law," said Dzurinda.

Kňažko admitted that the idea of a KDH-DÚ coalition still enjoys some support within the SDK, but stressed that the right decision must be made very quickly. "The face of the SDK must be recognizable to the public. We cannot cast doubt what we have achieved so far," he said.

In the end, at its May 29 national congress, DÚ delegates voted by a margin of 66 to 17 to enter elections as a single party under the SDK banner.

One of the most controversial provisions in the new law is one which bans election campaigning in private media and restricts the "propagation" of political advertising to the state-controlled Slovak Television (STV) and Slovak Radio (SRo). Moreover, the law forbids all private media, including the press, to publish any political information that might promote any political party during the entire campaign period, which starts one month before the elections set for September 25 and 26.

Independent media representatives warned that the wording of the law was dangerously ambiguous, and said that hazy definitions of "editorial content "and "information" could be used to bar all political news coverage by private media during the campaign.

"The law creates space for intimidating private radio and TV stations," said Pavol Rusko, President of the Association of Slovak Independent Radio and Television Stations and general director of the private Markíza TV station, one of the sharpest thorns in the government's side.

"If the [private] media were objective and non-partisan, they could participate in the campaign," argued Cuper. "But they have to grow up and learn some moral lessons first."

Before the law entered Parliament, both of Mečiar's coalition allies disagreed with barring private media from the campaign, but in the end, every SNS deputy present and most ZRS deputies approved the law. "I am astonished that the [HZDS] coalition partners stepped into this trap," Rusko commented. "I think they will pay for it dearly."

"I would be happier if the private media could participate [in the campaign]," said Jozef Prokeš, an SNS deputy, "but it was impossible to have it accepted by [the HZDS]."

The National Democratic Institute, a Washington-based NGO which focuses on examining election legislation in various countries, stated that the media provisions of the new law "contravene Slovakia's Constitution and international human rights standards [included in the European Convention for the Protection of Human Rights and Freedoms]."

Speaking at May 22 press conference in Bratislava, Stephen Flanagan, US President Bill Clinton's advisor for Central and Eastern Europe, said he had "no illusions" that the equal time for commercial presentation of political parties in STV and SRo would "guarantee equal time and assessment of political reporting in those media." (see related story, page 4.)

According to Dzurinda, fair elections are the principal basis of any country's democratic system. "The country is judged by the extent of democracy in the election process," he said.

Flanagan agreed that the extent to which democratic principles are observed during the elections will become the measure of Slovakia's international assessment. "We will judge Slovakia by how these elections are conducted," he said.

But Cabaj criticized the opposition for complaining about the fairness of elections four months before they even begin. "I don't snitch to the teacher when no one has slapped my ass yet," Cabaj said, adding that he was convinced that the HZDS would win the elections. "There is no other option. We have to take care of Slovakia, because we were there at its creation. We are destined to keep it going."