Nestling in the lower region of the Vah river in western Slovakia is the world-famous spa town of Piešťany. The town's wonderful natural riches include hot springs of healing thermal waters, which reach temperatures as high as 70 degree celsius, and enormous deposits of curative sulphur mud. Since time immemorial, the curative effects of these thermal springs and the sulphur-bearing mud have attracted people from far and wide, especially those suffering from rheumatic problems.
Today the heart of the Piešťany spa is a 'spa island' which came about after the building of a dike to protect the hot springs. 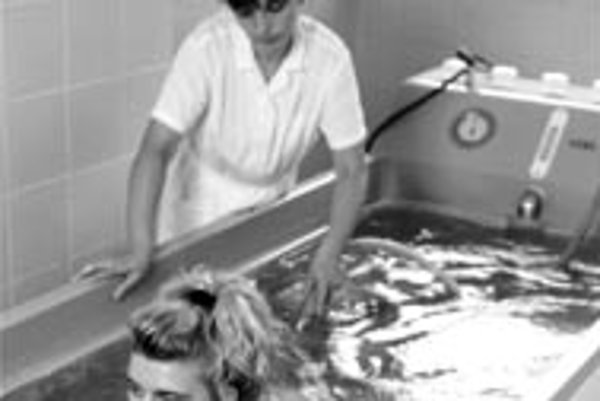 Font size:A-|A+  Comments disabled
Nestling in the lower region of the Vah river in western Slovakia is the world-famous spa town of Piešťany. The town's wonderful natural riches include hot springs of healing thermal waters, which reach temperatures as high as 70 degree celsius, and enormous deposits of curative sulphur mud. Since time immemorial, the curative effects of these thermal springs and the sulphur-bearing mud have attracted people from far and wide, especially those suffering from rheumatic problems.

Today the heart of the Piešťany spa is a 'spa island' which came about after the building of a dike to protect the hot springs. Prior to its completion, the dike resulted in the destruction of some of the springs due to the invasion of fast-flowing water from the Vah river, especially during the floods. The spa's other important resource, sulphuric thermal mud, developed from the clay particles found close to the hot springs. The mineral-rich goop is used to ease pain and stiffness in sore joints, and to help relieve pain in the spinal and lumbar regions.

Historians have established that sometime between the 11th and 12th centuries a monastery existed in " Old Piešťany." The original site can be seen today in the garden of one of the houses on Defusanská Street. The name Piešťany is derived from the Latin "paskan" (sand) and was so called by the earliest settlers probably because their settlements were built on the sand deposited by the overflowing waters of the Vah river.

The spa also has a " fairy-tale" history, which claims that the healing powers of the waters were discovered when a big, beautiful and lame peacock dragged itself to the banks of the river below the village of Bana and was miraculously cured. Another tale says that the medicinal effects of the local waters were discovered by the legions of ancient Rome on their northward marches during the reign of the Roman Emperor Marcus Aurelius Antoninus. The presence of these soldiers has been verified from specific inscriptions on rocks within the grounds of Trenčín castle, situated a little to the north. It was said that the Romans dug hollows in areas close to the Vah, whereupon hot water started to flow; the soldiers then immersed themselves in the water, and discovered that it had an almost immediate curative effect. Word then spread, and so came the start of this truly magnificent spa complex.

It was in 1889 that Alexander Winter and his sons obtained a contract to take over the spa. This Jewish family wanted to put Piešťany on the map as one of the world's foremost spas, and in 1912 the largest and most luxurious hotel on the island, the Thermia Palace, was completed. The hotel joined the Irma spa building (named after one of the original owners, a family called the Erdody's) thus creating a self-contained unit with all one would expect from a grand hotel offering a variety of treatments in an adjoining building.

One of the first guests at this fine complex was the Bulgarian Tsar, Ferdinand I, who stated that such a hotel could not be found elsewhere in the whole of Europe. In l917, the hotel was the venue of a meeting between three monarchs - Austrian Emperor Charles I, German Emperor Wilhelm II and the Bulgarian Tsar, Ferdinand I -.to discuss the further course of the 1914-18 world war.

At the beginning of the second world war in 1939, the Winter family was forced to sell all their investments in Piešťany to a German consortium. Ludoviť Winter then moved to Bratislava, where he was subsequently rounded up by the Nazis and sent to the Terezin concentration camp north of Prague. He was lucky to survive, and after the war returned as an old and broken man to Piešťany.

Today, the official name of the island is the Slovak Therapeutic Spa at Piešťany. The hotel complex includes the Balnea Grand, Balnea Splendid, Balnea Esplanade, Balnea Palace, Thermia Palace, Pro Patria, Jalta and other associated buildings with a total capacity of 2,300 beds. All the hotels are categorized as first class, and all bedrooms are modestly but tastefully furnished and have telephone, radio, colour TV with satellite programs and a refrigerator upon request. All rooms have splendid balconies many with attractive garden views overlooking the lovely grounds.

There are indoor and outdoor heated swimming pools. Many of the available treatments will do you a power of good even if you do not have any specific aches and pains. However, if you suffer from arthritis or have problems with your back, hips or joints, then a course of treatment could work wonders for you. The hotels are connected by corridors to the spa facilities and to the consulting and examination rooms of medical specialists.

It is generally reckoned that you should stay for a minimum of three weeks to ensure the best results.

While all treatments are taken under strict medical supervision, the Piešťany spa is not a hospital environment but rather a hotel resort with an informal atmosphere where you can combine a relaxing holiday with a thorough physical overhaul through some extremely pleasant and beneficial treatments.

Each hotel has a number of restaurants which will offer you the typically hearty central European fare, but which do not provide haute cuisine. Drinks are reasonably priced, and wine lists include some palatable local red and white wines.

It is worth taking a walk to the old town of Piešťany where there are some fine buildings, many of which are being restored to their former glory. There are also a number of interesting tourist attractions to be seen, and visits can be arranged by contacting Balnea Travel, a very helpful local firm with an office within the hotel complex for your convenience.

I think you will be pleasantly surprised by a few weeks at spa island. Even if you do not want to leave the complex, you will still find plenty to do - a cultural centre stages regular concerts, and in the summer holds musical events in the open air. There are also a few shops within the hotels and a delightful evening bar/ restaurant with gypsy music open most evenings from 8 p.m.

Visitors continue to come to Piešťany in ever-increasing numbers from all parts of the world. Management also caters to special diets, including vegetarian, and has separate kitchens for preparing ethnic food for visitors from Israel and Arab countries.