Despite an April 30 truce in a media war of words between the two biggest members of the three-part Hungarian Coalition Party (SMK), verbal shootouts have continued, evidence of the tensions that remain between the two ambitious would-be leaders of Slovakia's ethnic Hungarian community.
The recent rows have featured Miklós Duray, Chairman of Együttelés-Coexistence (E-C) movement, and Béla Bugár, Chairman of the Hungarian Christian Democratic Movement (MKDH), each of whom feels that his party should lead the Hungarian coalition into the election campaign. 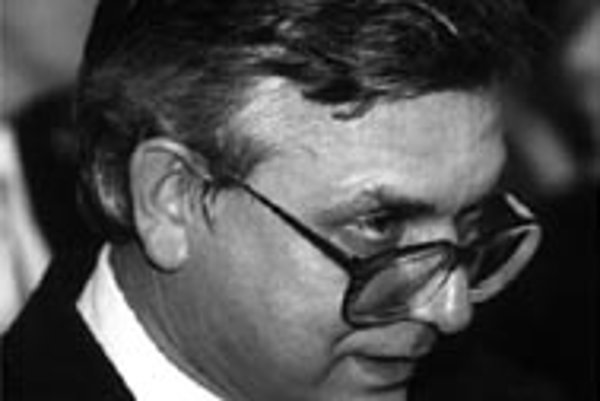 Font size:A-|A+  Comments disabled
Despite an April 30 truce in a media war of words between the two biggest members of the three-part Hungarian Coalition Party (SMK), verbal shootouts have continued, evidence of the tensions that remain between the two ambitious would-be leaders of Slovakia's ethnic Hungarian community.

The recent rows have featured Miklós Duray, Chairman of Együttelés-Coexistence (E-C) movement, and Béla Bugár, Chairman of the Hungarian Christian Democratic Movement (MKDH), each of whom feels that his party should lead the Hungarian coalition into the election campaign.

On April 22, SMK members agreed on individual roles, powers and the party's hierarchy. Bugar's MKDH consented to adapt its statutes to accomodate the other two parties and become the basis of the new assemblage. Chairmanship of the coalition was given to Duray's E-C, while the Hungarian Civic Party (MOS) representative was named the Deputies' Board Chairman.

But Duray still hasn't buried the hatchet with the MKDH, which unilaterally decided at its April 18 congress to transform itself into the SMK without previous negotiations with the other two partners.

One week after receiving the proposed SMK statutes from the MKDH, the Interior Ministry rejected them due to irregularities concerning the liquidation of the property of the coalition's individual parties after they ceased to exist. "We do not deal with these questions at coalition discussions, since it is an internal matter of the MKDH," said Duray bitterly.

But according to László Nagy, MOS Chairman, the statutes were fixed and handed back to the ministry on May 14. If it has any further objections, the ministry will have five days to announce them, but otherwise, the statutes must be verified within 15 days.

Another problem for the SMK arose over the desired ratio among the nominees of the three parties on the single candidates' list for the September national elections.

In the current Parliament, the 17 Hungarian deputies divide as follows: nine belong to the E-C, seven stand for the MKDH, and one represents the MOS. But the MKDH and the MOS maintain that the candidates list should be prepared according to the long-term voter preference rates recorded since 1994 in opinion polls by the Focus and MVK agencies. According to these figures, the MKDH would get nine of 17 seats in a future Parliament, while the E-C would have five and the MOS three seats.

Denying the relevance of polls' results, the E-C suggested that the list reflect the current situation in Parliament, which is a product of the 1994 national elections results. "These are the only concrete and real figures," said Duray. "The results of Focus are irrelevant as there is up to 70% margin of error."

Both the MKDH and the MOS have strictly refused such a calculation, with MOS Vice-Chairman László Gyurovszky calling it unacceptable. "I can't see the reason for preserving the situation from 1994. The voters would not appreciate it, either," he said.

In the end, Duray agreed that the ratio chosen should reflect the electorate's opinion. However, he cautioned that the political experience of candidates should also be considered. "If the current opposition wins the elections and [the SMK] gets into Parliament, it will be necessary to have qualified deputies at important parliamentary posts," he said.

Choosing a joint leader proved another thorny issue for the SMK. Bugár accused Duray of thwarting the transformation procedure by questioning the chairmanship after agreement had already been reached on the position. Duray replied that the MKDH had blackmailed the MOS into accepting its candidate, and refused to accept the joint statutes proposal.

Commenting on the ruckus, Nagy opined that "the E-C has a problem with admitting that it is steadily losing popularity. They are painfully aware of their decrease in influence, but still want the kind of position they enjoyed four years ago, when they were in their heyday."

Duray, for his part, maintained that his main objective was to contain the efforts of the MKDH and the MOS to keep strongly independent positions within the single party. "I do not believe that the independence of the [respective] platforms would help the federal party to function," he said.

Nagy tried to sound a conciliatory tone. According to him, Bugár had openly exposed the party's internal problems to the media, which was an bad step, while Duray had been too quick to take offense. "This is not the time for such problems," Nagy said. "We have too many agreements to reach before the new election law is passed."