Recent personnel changes at Slovak Radio (SRo) and its affiliate, Radio Slovakia International (RSI), have led to a more conservative programming policy, and have triggered accusations that journalistic integrity is being sacrificed to election-year politics. As popular wisdom has it, state-controlled media outlets are always manipulated by governments for spreading propaganda.
Radio experts concede that threats to objectivity exist, but maintain that SRo's market dominance has not so far been abused by the government for partisan aims, unlike state-run Slovak Television. Instead, they argue, Slovak Radio has displayed a commitment to objective reportage, and has kept its distance from the political fight that has polarized the country's print media. 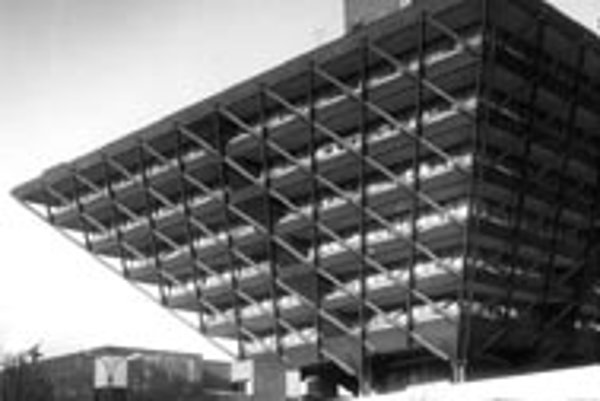 Font size:A-|A+  Comments disabled
Recent personnel changes at Slovak Radio (SRo) and its affiliate, Radio Slovakia International (RSI), have led to a more conservative programming policy, and have triggered accusations that journalistic integrity is being sacrificed to election-year politics. As popular wisdom has it, state-controlled media outlets are always manipulated by governments for spreading propaganda.

Radio experts concede that threats to objectivity exist, but maintain that SRo's market dominance has not so far been abused by the government for partisan aims, unlike state-run Slovak Television. Instead, they argue, Slovak Radio has displayed a commitment to objective reportage, and has kept its distance from the political fight that has polarized the country's print media.

"If you really want to find total objectivity, you should watch weather forecasts," said Ján Sand, professor of radio journalism at Comenius University's Department of Journalism. "Yes, you can find moments when SRo is not as unbiased as the public radio services in Germany or England, but in general, SRo is quite balanced, and radio overall is still the most objective media in Slovakia."

A freelance reporter for SRo and a former member of the Slovak Council for Radio and TV, Sand argued that a mixture of tradition and the current political environment had insulated SRo against manipulation.

"SRo is not the object of a political power struggle like Slovak Television. It's incredible how many people who are trying to get into the TV business have butter on their heads," Sand said, employing an old Slovak saying that denotes a morally compromised person. "On the contrary, SRo is staffed mostly by old warriors who have been on the front lines for a long time, and who are trusted by the public. And SRo itself has a tradition of catering to a very wide audience. To survive, it must have something for everybody."

But Eugen Gindl, a media expert and a supervising editor at the daily SME, said that recent personnel changes at SRo had eroded the station's credibility. Jaroslav Rezník, son of the editor-in-chief of the government-affiliated daily Slovenská Republika, had taken over as SRo director in November 1997, while Vladimír Draxler, a radio historian with no news experience, had been installed as SRo's chief news editor in January 1998.

"The most intensive form of control at SRo is self-censorship that is conducted according to internal guidelines," Gindl said. "Rezník was hired because he knows how to direct this regime."

Sand agreed that SRo was in danger of losing its good name. "Attempts will be made to manipulate it, of course," he said. "There were pressures before the elections in 1992 and 1994, so they will certainly try again." Sand reported that Draxler had made several personnel changes, but that SRo programming had so far not suffered. "Like a new broom sweeping out an old house, he has moved his own people in, sure."

One of the "new people" installed by Draxler was Ladislav Kubiš, RSI's new editor in chief. Kubiš declared it RSI's mission to "spread the good news about Slovakia," but insisted that "you shouldn't confuse spreading good news with making propaganda. There's a very fine line between the two, and that's the whole problem with this kind of broadcasting, because everyone has a different idea of where this fine line lies."

But a source at RSI, who preferred to remain anonymous, said that Kubiš's arrival had coincided with increasing censorship of both reporting and broadcasting, and argued that RSI was rapidly approaching the line between Slovak boosterism and political propaganda.

"Before Kubiš came, there was not too much censorship, and we were allowed to defend our ideas," the source said. "But now, news is centrally prepared daily by one of RSI's five services [Slovak, English, German, French and Russian] and then distributed to the others to be translated and read. This system makes it easier for Kubiš to control what is being broadcast, because he only has to listen to one news program."

Kubiš, for his part, claimed that only "40 to 50 percent" of the news was prepared centrally, and that his primary ambition had been to cut costs. "When I came here I found that each section was preparing its very own program," he said, "which is a pity when you consider that the aim is more or less the same for each service, and a lot of work is saved by not repeating the same work five times."

But the RSI source said Kubiš's "coordination of programming" made no sense given the enormous disparities between RSI's five different listener groups. "The Russian audience is completely different from the French, which is very small and confined to France and Quebec," the source said. "Every audience has different demands, and we cannot just make propaganda."

The pressures of work

Kubiš reported that RSI's entire budget [54 million Sk for 1998] was financed by the state and approved in Parliament. "The complete dependence of state television and SRo on the state budget is unfortunate," he said. "These budgets are voted on every year, so there is complete uncertainty as to what sums will be assigned. And this gives space to certain political pressure."

Regarding the political pressures that he faced in his own job, Kubiš said that "in general, there are no pressures on me at all," but conceded that "things are different when something blows up."

One of the recent things that have 'blown up' was an interview by RSI's English section reporter László Juházs with US Ambassador Ralph Johnson, which was broadcast in an abbreviated form on March 21. Too critical of Slovakia for RSI standards, the interview had been carefully trimmed of its harshest elements by English section director Helga Dingová. "Mr. Kubiš asked to see the [edited] interview after it was broadcast, and said it was still too critical," Dingová reported.

But any hopes that the interview would pass unnoticed were dashed when Juházs gave the full original version to Új Szó, Slovakia's biggest Hungarian-language daily, which duly published the critical text.

RSI sources recalled that Kubiš had been furious, and had docked Júhazs 1,000 Sk a month for insubordination. Following the interview's publication, SRo's english section was required to do six interviews in a row with governing coalition members, without an opposition source, and is currently no longer allowed to interview opposition sources except on items that are already in the news.

Despite the recent personnel changes at SRo and RSI, Sand maintained that it was too soon to pass judgement on whether Slovak public radio would succumb to political manipulation or manage to defend its tradition of objective journalism. "In Slovakia," he said, "we have a saying - 'we'll see, said the blind man'."

The struggle for control of media has been an ongoing battle for the past several years. In The Slovak Spectator's next media series feature, Slovakia's fledging independent radio market will be examined in depth.