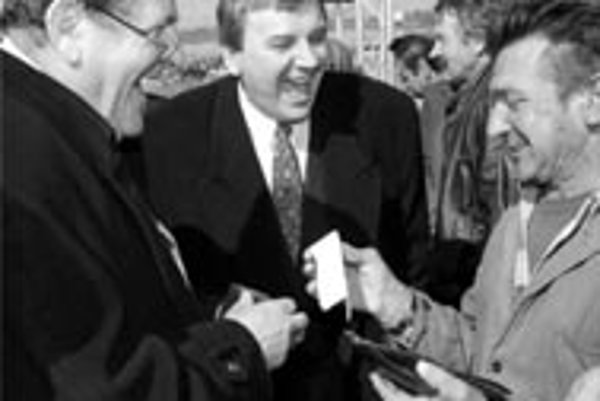 According to Ivan Šesták, Doprastav's Director General, the achieved results stem from "investments into machinery equipment and technology, their uninterrupted utilization and the high professionalism of [our] workers at all levels," as he wrote in company's annual report 1997.

Doprastav's good fortune started with its privatization, which began in January 1994 and was completed by April 1995. The National Property Fund, the state privatization agency, sold a 51% stake in Doprastav to a joint stock company owned by employees, DOAS a.s., raising their overall stake to 61.4%.

"We had to adapt to completely different conditions," said Pavel Obenau, Šesták's assistant, adding that "in state-owned companies, workers were losing their motivation, mostly because of salaries. This has changed since 1994."

Favorable results enabled the company in 1996 to pay a dividend of 50 Sk per share, or 5% of the nominal value. But the annual shareholders meeting (AGM) on April 15, 1998 decided that Doprastav would pay an even higher dividend.

"The AGM decided on payment of a 7.5 percent dividend from a 1,000 crown nominal share," said Ján Zarecký, the head of the company's financial department.

Zarecký pointed out that the higher salaries and increased dividends had been made possible by the company's success in winning tenders for building three more stretches of the country's highway network. Doprastav faced strong competition for the contracts from Váhostav and Hydrostav, two other major Slovak construction companies.

According to Ján Mikolaj, Director General of the Slovak Highway and Road Authority (SSC), "the most important thing [in winning a tender] is price. This is 70% of the battle. The rest is the company's reputation. All of last year's tenders were awarded on the basis of the cheapest offer. This is because Doprastav, Váhostav and Hydrostav are basically at the same level."

Last year was the most successful in Doprastav's 45-year existence, and company officials have reiterated that cementing their position in the highway network program is a top priority. Having already won two contracts this year, Doprastav has set its sights on many more major tenders.

However, in August 1998, Doprastav will face perhaps the most difficult task in its history - the completion of the western Slovakia highway section, a home stretch over 45 kilometers in length. Obenau explained that only one side of the highway will be ready, but that even so, users will be able to drive non-stop from Bratislava to a point about 40 kilometers short of Žilina. "I am convinced the section will be finished on time, no doubt about it," Obenau added.