On April 8, members of the Slovak National Party (SNS) Central Committee launched a petition drive to spark a public debate on Slovakia's neutrality and the death penalty. On the inaugural day, all SNS leaders personally supported the initiative, with Ján Sitek, Slovak Defense Minister and SNS Vice-Chairman, being among the first to stick his John Hancock on the dotted line, indicating that five months before the elections, party affiliations count for more than the government's political program. 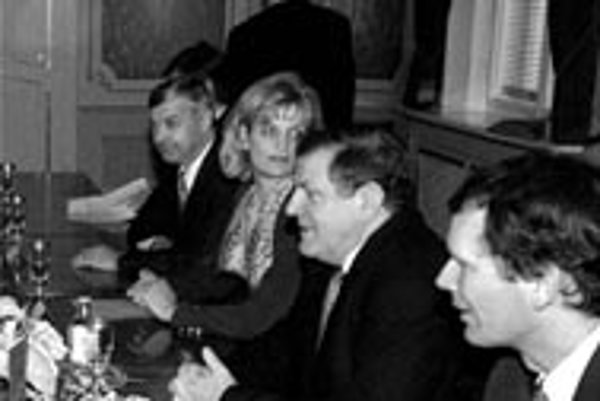 Font size:A-|A+  Comments disabled
On April 8, members of the Slovak National Party (SNS) Central Committee launched a petition drive to spark a public debate on Slovakia's neutrality and the death penalty. On the inaugural day, all SNS leaders personally supported the initiative, with Ján Sitek, Slovak Defense Minister and SNS Vice-Chairman, being among the first to stick his John Hancock on the dotted line, indicating that five months before the elections, party affiliations count for more than the government's political program.

Jozef Moravčík, a former Slovak Foreign Minister and leader of the 1994 interim cabinet, now a deputy with the opposition Democratic Union (DU), criticized Sitek's move by saying, "It's striking that a member of a government, which says something else in its program, signed this petition."

"[Sitek is] first of all the vice-chairman of SNS, and only then a member of government," SNS Chairman Ján Slota said in explanation of Sitek's move.

Sitek himself reasoned that his personal convictions outweighed any obligations attached to his government post. "The right to sign a petition is a personal matter for every citizen," he said. František Kašický, the Defense Ministry spokesman, confirmed that Sitek had signed the petition as a private citizen rather than in his capacity as a minister. "Ján Sitek, as a citizen of Slovakia, used the rights granted him by the Constitution," Kašický said.

"We do not want to manipulate citizens or force them to sign something [they do not want to sign]," said Malíková, adding that "if somebody wants to sign only the neutrality sheet, he does not have to sign the death penalty sheet at the same time."

According to SNS spokesman Rafael Rafaj, the petition drive will not be limited by time. The party's aim is to gather 100,000 signatures. By April 17, they had already collected between 10 and 20 thousand signatures.

But Slota defended the question on capital punishment by saying, "whoever violates the law [by making] an attempt on someone's life doesn't have the right to a moderate penalty in a civilized society."

As for neutrality, Slota stressed it was the best economic and political alternative for Slovakia, claiming that the country's possible entry into NATO would be just "another step towards depriving this young state of its sovereignty. The Slovak nation has been under the boot of the Soviet Warsaw Pact for 50 years, and I think it has had enough of such oppression."

Moravčík believes the campaign is a "crazy" idea and merely SNS propaganda. "I don't know who would guarantee [our] neutrality," he said. "Neutrality for Slovakia is pure lunacy, and has nothing to do with acting responsibly towards this nation. To me, it is only a part of the SNS pre-election campaign, aimed at keeping their existing voters and acquiring [more supporters] through their demagogic reports," he concluded.

Premier Vladimír Mečiar's HZDS also shrugged off the petition as a campaign ploy directed at September's general elections, saying the government had no objection to its smaller partner stimulating public debate on the issues. "Every party will try to boost its image," said Vladimír Hagara, HZDS spokesman. "These two things are what the SNS thinks might boost its popularity."

During his recent trip to Slovakia, NATO Secretary General Javier Solana discussed Slovakia's prospects for NATO membership with Sitek, who assured Solana that membership would continue to be the government's top priority.

But Slota thought otherwise. "There's no need to enter NATO until there is some enemy," he said. Moravčík countered that such opinions were short-sighted. "The fact that we don't have any enemy now doesn't guarantee long-term security for Slovakia," Moravčík said. "The world is not so ideal, and won't be for a long time."

"The world has come to a system of collective safety, of which NATO is a good example," concluded Moravčík, charging that the SNS has no clue about foreign policy. "Mr. Slota is no good at foreign policy, and I don't know anyone in his party who would be better," he added.