Three Hungarian parties merge into one

Threatened with extinction by the ruling coalition's election law amendment, three ethnic Hungarian parties obeyed Darwin's 'survival of the fittest' law and on April 18 exchanged marital vows after almost eight years of living together out of wedlock.
However much the transformation from the current loose Hungarian Coalition (MK) into a tighter federative Party of the Hungarian Coalition (SMK) may have seemed simple to the respective party leaders, some tensions remain which indicate that the unity may prove very fragile. 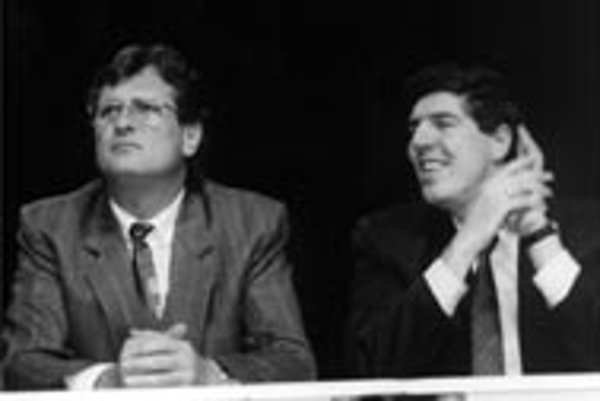 "We want to create a party that will represent the various values that exist within the Hungarian community in Slovakia," said Miklós Duray, Chairman of Együttelés-Coexistence (E-C), adding that the current MK has been virtually "sentenced to death."

"This is not a landmark decision," said Béla Bugár, Chairman of the Hungarian Christian Democratic Movement (MKDH), in reaction to the flowery oratory of some ethnic Hungarian deputies who felt that the union was an historic occasion. "It is all because of the new [election] law."

In an attempt to make it harder for loose opposition party coalitions to make it into Parliament after September's national elections, a group of ruling coalition deputies proposed a new election law on March 6, which required that every member party of a coalition win at least 5 percent of the popular vote or be disqualified.

For the MK it would mean registering over 15 percent of votes, despite the fact that only 11.5 percent of the Slovak population is of ethnic Hungarian origin. "[Forming] a federal party is the safest way to avoid potential [government] insults of this kind," said Bugár.

On the other hand, the far-right Slovak National Party (SNS), the MK's sworn adversary, hopes that the appearance of a new party representing ethnic Hungarians will bury their election hopes. "If [the SMK] is driven out in the elections, it will be driven out by the voters due to its unconvincing impression," said Anna Malíková, SNS Vice-Chairwoman.

The SMK decision to form a single party followed a similar decision by the SDK on April 5. Like the SDK, the SMK said that even though the election law would probably not pass until Parliament's May session, it was better to be prepared now than taken unawares later. And while SDK member parties retained the option to run independently if the law doesn't pass, the Hungarians didn't take any chances.

Not every party leader found union the best solution, though. László Nagy, Chairman of the Hungarian Civic Party (MOS), said that he would have been happier if the SMK and SDK had followed an identical electoral plan. "The government then would find it hard to act against the will of potentially 30 to 40 percent of the public," Nagy explained.

Another problem, according to Nagy, was that creating a united party would end the political existence of each member party. "It will harm our contacts with foreign political partners, as we are members of the International Liberal Party and the European Liberal Party," Nagy said, adding that Bugár's MKDH has close relations with different European political structures. "It might become harder for us to lobby for a democratic Slovakia if these relations are jeopardized," Nagy said.

The new federal party is expected to take form by the end of May. The parties' lawyers are now applying spit and polish to joint statutes. "We are now searching for an agreement among the individual parties, seeking to clarify which of the parties' statutes must change in order to implement new ones," Duray said, adding that the April 18 joint congress will decide which party will function as host to the other two.

In contrast to the SDK's internal wrangling, the SMK's decision-making mechanism doesn't seem to be a problem. "The mechanism is of a consensual type, which means that each party's vote carries equal weight," said Bugár, maintaining that each party had the right of veto.

Both the E-C and MKDH are already struggling for the honor of being the 'mother' party. But László Gyurovszky, MOS Vice-Chairman, did not think the issue would be the most important subject of debate, and suggested that agreeing on a joint leader will be a much tougher task.

An opinion poll conducted by the MVK agency last February and March revealed that the MKDH, with 7.0 percent support, leads the pack, followed by the E-C with 2.2 percent and the MOS with 1.1 percent.

"The voters seem to support the idea of a joint party, so the change may raise our [combined] figures," Bugár said, while Duray added "I think that a well-functioning federal party will attract more potential voters."

As MKDH chairman, Bugár appears to be the hottest candidate for the position of joint leader. "It is not decided yet," countered Duray, adding that there are two alternatives for the SMK's future leadership. One is the so-called rotation model, with each party chairman taking a one-year turn as the leader. The second alternative is that the three chairmen become vice-chairmen and that the party chief be elected by the congress.

All party leaders agree on their core partner in both the pre-election and post-election periods. "We would like to continue our co-operation with the SDK," Bugár said. Duray added that the SMK hopes the current opposition will win the elections and "then we would like to participate in the new government."