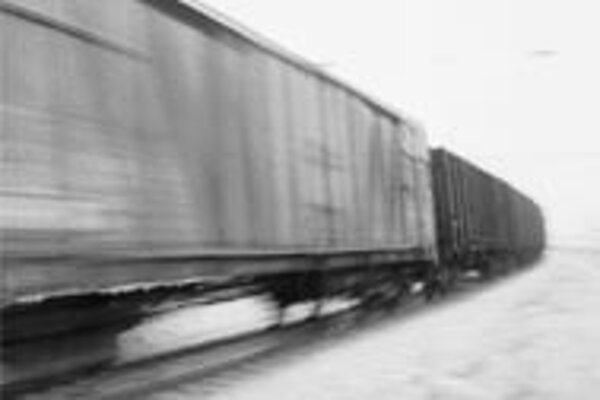 Projected 1998 expenditures for passenger transport amount to 8.34 billion crowns, while revenues are 1.63 billion and state financial support around 2.2 billion: the result is an abysmal shortfall of 4.51 billion. Not even an 880 million crown projected surplus from freight transport can balance the loss.

Finding itself cash-strapped and with no prospect of increased state budget subsidies, the company began to look for finances elsewhere in 1996.

Like all Slovak employers, ŽSR deducts one percent of every employee's gross salary to pay insurance and unemployment dues to the National Labor Office (NÚP). However, much of this money, which, according to NÚP, represented millions of crowns, has never reached its destination. NÚP employment offices around the country reported that ŽSR had not paid its dues for several months in 1996 and for the most part of 1997, let alone for 1998.

This information was confirmed for the Pravda daily by Miloš Čikovský, ŽSR spokesman. Čikovský toldThe Spectator that the problem of unpaid dues was connected to the company's financial insolvency. "We obtained enough money to cover all employees' salaries, but we couldn't cover the dues," he said. "The question is not whether we did or didn't knock some percentage off wages, we simply didn't have the money."

Having squandered the funds and confidence of its employees, management came under fire from ŽSR's labor unions, who charged in the Práca daily that ŽSR was beginning to have problems finding enough money to pay salaries.

Peter Rozložník, Vice-Chairman of ŽSR's labour union, reported that "many employees who are considering initiating legal proceedings against [Lazar], who is responsible for not paying the dues." He added that ŽSR is also not paying other dues, like social and health insurance. "We know of a concrete example of a child insured by Garant [an insurance company established mostly for ŽSR's employees and their families] and who had a high temperature. The ambulance refused to come as soon as they heard the name of the insurance company."

Rozložník, who also sits on the NÚP board, said that the backlog on ŽSR dues is not in the tens of millions but "about one billion crowns."

But Lazar said that the salaries of over 50,000 employees was too big a chunk to swallow. "We are bothered by the 45 percent share of wages on our overall expenditures," Lazar said. "If we wanted to cut that share to an optimum 30 percent, about 12,000 people would have to be fired."

Relations between management and labor improved slightly after the signing of a 1998 collective agreement, which guaranteed a 10 percent wage increase. Lazar described the document as "well above standard [contracts]," but explained that management had not begrudged employees the raise. "We are happy that we managed to preserve social peace," he said.

The collective agreement added 600 million Sk to the company's 1998 projected financial loss. But instead of tightening its belt accordingly, ŽSR management loosened to the tune of another 600 million in a financial scandal connected with the purchase of special boxcars.

In February and March 1998, ŽSR ordered 200 Shimmns boxcars from a Slovak manufacturer, Tatravagónka Poprad (TP), but ended up paying twice the normal purchase price to an unknown British mediator.

On April 3, Mikuláš Dzurinda, former minister of transport and currently the opposition Slovak Democratic Coalition (SDK) leader, initiated legal proceedings in the case citing suspected violations of the law that had occured in the business agreement between ŽSR and TP.

According to Dzurinda, the boxcars were not sold directly to ŽSR, but the purchase was mediated by a British company, European Railway Finance Ltd. (ERF). In the end, he said, ŽSR had ended up paying 6 million Sk ($170,000) to ERF for each car, instead of the 3 million that TP had sold them for, amounting to an overall loss of almost 600 million crowns ($17 million).

Dzurinda said he had specific information that 10 boxcars of the Shimmns type, designed for transporting rolled steel sheets, had crossed the Slovak-Hungarian border at Komárno-Komárom on February 12, staying one day on the Hungarian side and reentering Slovakia one day later. The media later reported that an unspecified number of this type of boxcars made the same round trip on February 27 and March 2.

Dzurinda charged that the ERF was a business partner on paper, and that the wagons had had to leave Slovakia to create the impression of legality. But Čikovský explained for the Trend weekly that they had to use a foreign mediator due to the license. "We signed the agreement not with Tatravagónka but with the British company, since they have the license [for selling the Shimmns type boxcars]."

Lazar explained that the agreement was signed in May 1997 by the previous director, Bartolomej Sinai, but said he fully supported Sinai's move because the company desperately needed the boxcars. "We knew that such a purchase was absolutely necessary, because we were not able to satisfy our customers and provide them with special boxcars," he said for the daily Sme, adding that ŽSR deploys about 150 of them every day.

Although Tatravagónka produced the boxcars exclusively from foreign components, and according to Čikovský, "there is a production-sales cooperation between Tatravagónka and the ERF," Čikovský did not exclude the possibility that Tatravagónka could have sold the cars directly to ŽSR.

But Lazar said the advantage of using the ERF was the system of payment, which he claimed was a lease. However, Trend obtained different information, according to which the method of payment was based on "advanced payments and additional payments," and therefore could not be considered a lease.

Ironically, ŽSR management had no detailed information on its exclusive British partner. "The General Director has not looked into these matters, and for the moment, nobody has any further knowledge about this company," Čikovský said.