A distance of 320 meters usually takes about three minutes to walk. But the road of this length that connects the inner and outer gates in Leopoldov, Slovakia's largest prison, may take ten or twenty years to travel. Is it the road out of hell, as many westerners imagine, for whom prisons in eastern Europe conjure up notions of desolate Russian gulags? Or does it bring forth idlers who have enjoyed a life of lesiure and fun, as is believed by Slovak taxpayers?
There are literally hundreds of myths about life behind the walls and bars of Slovak prisons, beliefs that are as distant from reality as Slovak prisoners are from society. 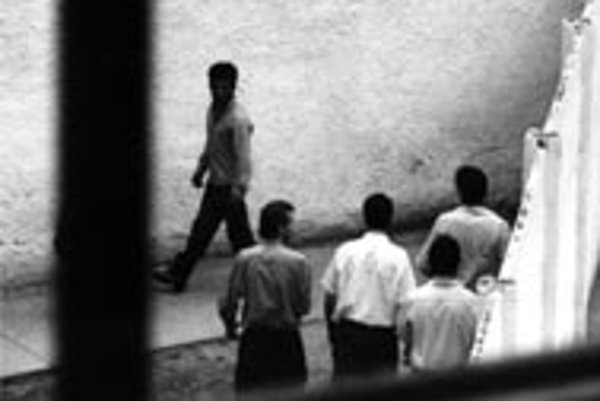 Font size:A-|A+  Comments disabled
A distance of 320 meters usually takes about three minutes to walk. But the road of this length that connects the inner and outer gates in Leopoldov, Slovakia's largest prison, may take ten or twenty years to travel. Is it the road out of hell, as many westerners imagine, for whom prisons in eastern Europe conjure up notions of desolate Russian gulags? Or does it bring forth idlers who have enjoyed a life of lesiure and fun, as is believed by Slovak taxpayers?

There are literally hundreds of myths about life behind the walls and bars of Slovak prisons, beliefs that are as distant from reality as Slovak prisoners are from society.

Slovakia has about 120 prisoners per 100,000 people. About 7,500 convicts are serving time in the country's 18 prisons, including the biggest prison for women in Nitra. Some 1,700 more accused await sentencing in custody.

Slovak prisoners are divided into three goups. The first group is made up of first time convicts, sentenced mostly for "crimes less harmful to society". These prisoners can receive visitors twice a month for two hours, and can even hug them - if they come.

Prisoners from the other two groups must be prepared to speak through a glass divider. These convicts are housed in smaller groups, and their names, which appear on cell doors, are usually marked with one of two colors. "White" means they are not dangerous, "red" is to warn that they may be harmful.

A lovely place to be?

"Prisoners have it great," said a law student at Comenius University who wished to remain anonymous. "They have three meals a day, can watch color TV anytime, they're all set."

"I've heard that one before," reacted Jozef Holcsík, warden of the prison institution for sentenced men in Leopoldov. "Something like that can be uttered only by someone that has never been here. These men have to behave according to a strict regimen, because we have to have discipline here."

Holcsík called people who envy prisoners their color TV sets "weirdos". "They don't make black-and-white TV's any more," he said. "Am I supposed to ask producers to make some just for my jail?"

Holcsík's jail is generally known as Slovakia's toughest lockup. The 432 convicted prisoners who currently live inside the walls can swear to the truth of that reputation, while the 267 people arraigned in custody, who are housed in a separate building within the prison's perimeters, may hope they never have the chance to judge for themselves.

Most prisoners from the first, less dangerous group, are allowed to enliven their rooms with posters, personal belongings, even flowers. They also have unlocked cell doors. Second-group convicts are not allowed any decorations and their doors are kept locked. The same goes for men in the third group, with one addition - bars that separate them from both the door and the window.

The law grants each prisoner 3.5 square meters of space, which can accommodate a bed and a two-shelved iron wardrobe. Prison cells are now designed to hold four to 15 men, but before the 1989 revolution, bigger rooms with 40 to 60 inmates were standard. Those units have since been rebuilt, since smaller groups of prisoners are easier to handle.

The law also requires that all prisoners work, but not all do so because after the fall of Communism in 1989, companies were no longer obliged to employ prisoners whenever ordered to by the government. "About 60 percent of the prisoners here work," Holcsík said. "They can work in the kitchen, the bakery, the printing shop or in the construction areas we have here."

Alexander Fischer, director of the prison for remanded prisoners in Bratislava, explained that before 1989, the relationship between prison guards and prisoners had been based on repression, but that now the relationship was supposed to be based on mutuality. "They have to trust us, and we have to do the same, based on the laws that bind us," he said.

After convicts have worked their eight hours, the time for prison leisure comes. If prisoners don't - or can't - write letters during their free time, they have to take part in "educational activities". In separate groups they draw, paint and sing, or take care of fish, exotic birds or plants.

"They are my little ones," said a convict proudly of his exotic birds. The man, who had been sentenced to 12 years for murder, takes care of his pets and even talks to them.

But there are some prisoners who refuse to be reintegrated into society. "Some of them don't want to cooperate, and they cause disorder among the other prisoners. For those men we have special cells with glass separating them from the door and the windows," Holcsík said, pointing at a man inside one such cell.

As in a silent movie, the man was talking to someone through the washbasin plumbing, an old way of communication in this prison. The only challenge to his communication efforts was the fact that no one presently lived in the cell beneath him, which didn't seem to dismay the message sender.

Holcsík said that all prisoners are checked once every three months by a doctor and a psychologist.

"It's tough to name the hardest thing about this job," Holcsík said. Then, after a moment's reflection, he explained that the hardest thing was probably providing prisoners with the necessities of life, such as meals. The state budget designated 34 Sk ($1) per day for the feeding of each prisoner, Holcsík said, making it all but impossible to secure enough nourishing food for the entire prison population."It is very hard, we have to buy things at the cheapest places."

Fischer claimed to be in a different boat altogether when asked to name the hardest aspect of his job, as his prisoners are all considered innocent before the law. "The hardest thing for us, I think, is that all of them claim to be innocent, and say they will wait to hear what the court says. And they behave like that. But they have to follow our rules, order must be kept," he said.

"The hardest thing for all of us is to be here," said one prisoner who wished to remain anonymous. "We want freedom, we want to be with our families."

But only very few convicts have someone to return to, or any real destination once they have come to the end of their prison road. "Their wives often divorce them while they are serving time," said Tibor Farkaš, the second pastor of the Seventh Day Adventist's Church in Košice. "When they get out, many look to us because they are not prepared for normal life. After being locked in for so long, they are not able to think in everyday terms any more."