The political inferno ignited by Prime Minister Vladimír Mečiar's use of Presidential powers had scarcely abated before the government unveiled a controversial new election law proposal on March 5, engulfing Mečiar's ruling coalition in a fresh wave of criticism.
The proposal was scheduled for first reading in Parliament on March 24. A simple 76 vote majority is required for the law's approval; the governing coalition has 81 votes. It is expected that the final version will be passed during the May session, leaving the opposition only three months to adapt to the new rules of the game before national elections in September. 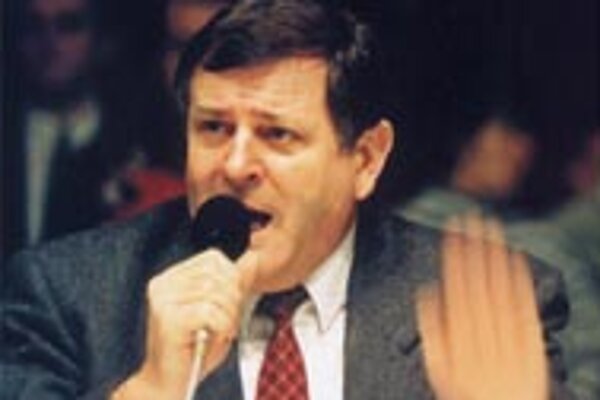 The proposal was scheduled for first reading in Parliament on March 24. A simple 76 vote majority is required for the law's approval; the governing coalition has 81 votes. It is expected that the final version will be passed during the May session, leaving the opposition only three months to adapt to the new rules of the game before national elections in September.

The government maintains that the law is designed to restore order and consensus in Parliament by reducing the number of small parties presently fighting to secure narrow interests. The Interior Ministry announced on March 16 that 88 separate parties and movements were currently registered.

But the opposition claims the measure will virtually outlaw coalitions, discriminate against independent candidates and give an overwhelming advantage to Mečiar's HZDS.

Independent legal experts have argued that the proposal contained several articles that were in conflict with the constitution and which threatened to cause mass confusion during the September vote.

"Three parts of the proposal are questionable from a constitutional point of view," said Eduard Bárány, Director of the Institute of State and Law at the Slovak Academy of Sciences (SAV).

"First, people in detention and waiting for trial will not be allowed to vote or stand for election," he explained. "But these people, according to our law, and that of all civilized countries, are innocent until proven guilty. So why shouldn't they be able to vote or be elected?" he asked.

The second troublesome provision of the new proposal, Bárány continued, was an article which required candidates for office to submit confirmation of party membership. "If this [article] means that you must be a member of a political party to stand for election, then it would be a clear violation of [article 30, para. 4 of] the constitution," said Bárány.

Finally, Bárány concluded, the proposal contained a series of impediments to the participation of political coalitions in national elections.

Until now, each party standing for election has had to gain 5 percent of the overall vote to enter Parliament. But the new proposal declares that if a member of a coalition fails to reach that threshold, "the other political parties of that coalition are viewed as if they had submitted their candidates list on their own." In other words, each member party of the coalition would have to win 5 percent or be barred from Parliament.

"The heart of the problem concerning the constitutionality of this proposal is that coalitions will have to fulfill all the requirements of individual parties, but will not have the same rights as those parties," Bárány said.

Each member party of a coalition, he explained, would still have to collect the 10,000 petition signatures necessary to take part in elections, while electors would have to select a single party on the ballot rather than cast their votes for the coalition as a whole. On the other hand, coalitions would have no greater representation on the Central Election Commission, and be awarded no more air time on state media than self-standing parties.

SDK and MK in the cross-hairs

This anti-coalition measure would seriously disadvantage the five-party SDK and the three-party Hungarian Coalition (MK). Based on the latest election preference poll, the SDK would lose its three smaller parties, or 7.6 percent of its support, if an election were held today. Only the KDH and DU, with 9.1 and 10.7 percent respectively, would survive. But the MK would be totally devastated, as the law would require it to score 15 percent to get into Parliament, although only 11 percent of the Slovak population is Hungarian.

"[The election law] is a radical interference with the democratic life of society," said František Mikloško, a KDH deputy, during a political debate held at Bratislava's Stoka Theater. "If the SDK were not allowed to take part in the election, Mečiar could get over a hundred deputies in Parliament. Then he could bring in the regime he was dreaming of [at a January 24 HZDS party conference] in Martin." (see related story, page 1.)

But Ján Cuper, a HZDS legal expert and one of eight deputies whose names appear on the proposal, dismissed such claims.

"The law doesn't restrict the entrance of political parties [to Parliament], it only stipulates a limit of 5 percent [of electoral support]," he said. "That's normal also in other countries."

Despite Cuper's reassurances, the SDK and the MK took the precaution earlier this month of registering with the Interior Ministry as single parties, but say they are still not out of the woods. "We have two possibilities now," said Mikloško. "The first, and less probable one, is that everyone who appears on the [SDK] candidates list, including chairmen, would leave their parties, give up their positions and enter the SDK. The other possibility is to create a double coalition between the KDH and the DU under the aegis of the SDK, a model the minor parties would have to adapt to."

The SDK's dilemma did not trouble the government unduly. "If [KDH Chairman Ján] Čarnogurský is going to create SDK, let him go and register it, and let him go find people," Cuper said. "Does he really want to join up with [DS Chairman Ján] Langoš or [SDSS Chairman Jaroslav] Volf, who have something like 0.7 percent [support]? If Čarnogurský wants to put them on the KDH ticket, let him do it."

The proposal would also unite Slovakia under a single electoral district instead of the current four, allowing Mečiar's name to appear on every ballot. The Central Election Commission, previously an independent and final authority on election protocol, is scheduled to lose some of its powers to the Interior Ministry and the court system. Only state-run television (STV) and radio (Slovenský Rozhlas) will be permitted to carry party advertising during the electoral campaign, and no-one knows how air time will be divided between parties and coalitions.

"Given the political atmosphere in Slovakia today, you always have to look for the hidden intentions behind such proposals," said Bárány. "If I didn't think they were trying to create enough electoral confusion and disorder to permit them to invalidate election results - which I don't - then I would say the government is trying to disadvantage coalitions and to put the election process in its own hands."