Men in black have it simple. They are Hollywood heroes who can weed out the scum of the universe pretty much by themselves. But defying the scum of the earth is an entirely different story, and not only because it's about facing human beings rather than galactic arthropods.
There are, however, men in black living among us. They rarely wear Ray Ban sunglasses and they are desperately outgunned, their only weapon being the courage to defend their ideals. They risk perhaps too much, because their most vulnerable spot is not their own lives but the lives of those they love. Nevertheless, they persevere in their crusade. What makes them do it? 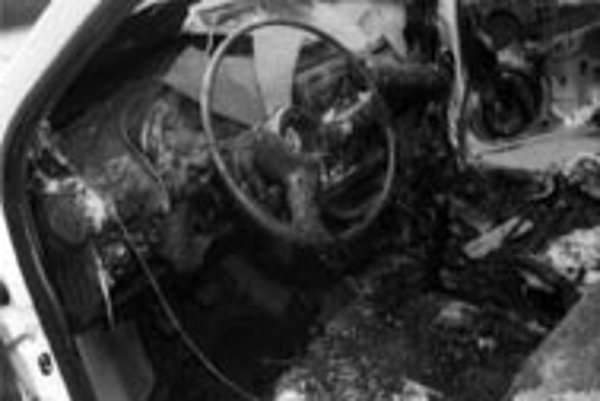 Font size:A-|A+  Comments disabled
Men in black have it simple. They are Hollywood heroes who can weed out the scum of the universe pretty much by themselves. But defying the scum of the earth is an entirely different story, and not only because it's about facing human beings rather than galactic arthropods.

There are, however, men in black living among us. They rarely wear Ray Ban sunglasses and they are desperately outgunned, their only weapon being the courage to defend their ideals. They risk perhaps too much, because their most vulnerable spot is not their own lives but the lives of those they love. Nevertheless, they persevere in their crusade. What makes them do it?

Peter Tóth, 27, is a reporter with the daily Sme. His beat includes organized crime, the Mafia, the Slovak Information Service (SIS) and related issues. Because of what he has written, Tóth has had to endure threatening telephone calls and all manner of surveillance. His car was destroyed by a Molotov cocktail, and he has been attacked on the street. One of his sources, a close friend, was murdered by a car bomb.

Tóth's first brush with the Mafia came in February 1998, while he was writing a story on the Nexon company, which had purchased the lot on which Incheba now stands. Nexon, as he discovered, was connected to Kýbel (Bucket), a well-known Bratislava underworld figure. "A friend of mine came several weeks later to warn me and said that I should stop writing about Nexon," Tóth recalled.

Although Tóth cannot afford to underrate the danger from the Mafia, he explained that he feels more threatened by "terrorism from the SIS," as he put it. "The Mafia has not been troubled for a long time by the police, so they are not really scared by one journalist," he said.

In August 1995, when former President Michal Kováč's son, Michal Kováč Jr., was kidnapped, forced to drink alcohol and then dumped senseless in front of a police station in Hainburg, Austria, Tóth spearheaded a group of half a dozen journalists who set out to investigate what they suspected was the worst kind of organized crime, that involving state structures.

After months of hard work, the journalists produced enough evidence to convince the Austrian regional court not to extradite Kováč Jr. to Germany, where a warrant for his arrest had been issued due to allegations that he had committed fraud against Technopol. Instead, the court decided in January 1996 to return Kováč to Slovakia, on the grounds that he had been brought to Austria against his will, and that the court suspected that "Slovak state authorities participated in the abduction."

The activities of those investigating journalists did not go unpunished in Slovakia. In November 1995, an anonymous caller invited Tóth to a meeting in a café, where he said he would offer certain pieces of evidence in the Kováč case. But no one showed up, and on the way back from the café, Tóth was beaten up near his home. Ever since, Tóth says, he has been watched by the SIS whenever he has been working on sensitive stories involving a source close to the SIS. In September 1997, an unknown assailant threw a Molotov cocktail into Tóth's car and burned it to cinders.

But the deepest wound for Tóth was the death of his friend Róbert Remiáš on April 28, 1996. Remiaš was the contact person between Tóth and Oskar Fegyveres, a former SIS agent who testified that he had assisted the SIS in carrying out the crime.

That day, Tóth said, he and Remiáš were to meet, but Remiáš never appeared. "I waited, left messages on his pager, and still nothing," he recalled. "I was at a police press conference when they announced that a black BMW had exploded. I knew it was his car. I was one of the last people to see him."

Remiáš's death was traumatic for Tóth. "I had nightmares in which I saw him burning in his car," he said. "It was terrible. I was home by myself, and it was really hard."

František Mojžiš used to own Drukos, a holding company to which he devoted ten years of his life. Last August he demoted himself to the position of mere director of the company and transfered Drukos's fixed capital, worth 350 million Sk, and over 3.5 billion Sk in combined assets to the Banská Bystrica Bishop's Office, founding a charity organization for helping the poor and ill. Mojžiš made these moves one day after a Mafia negotiator visited him with an offer of "cooperation".

"It would simply be too big a paradox if everything we have built... fell into the hands of the Mafia," Mojžiš explained.

Mojžiš picked Jozef Hrtus, the Bishop's Office Director, to be the head of the charity organization. "He was chosen because he is untouchable," Mojžiš explained. "I don't think they'll try to lay their hands [on the church]. That would bring them international trouble... and they would become outlaws everywhere."

Mojžiš said that the Mafia had established a contact with his company through his employees, especially the younger ones, who had been approached in Banská Bystrica bars and discos by mobsters making threatening remarks. "That's the usual way," he said. "These threats were made in a sense like, 'Hey, we've heard your company is doing pretty well, we need to come and check you out soon.' Then weird phone calls, menacing messages, until you feel that the noose is tightening and you expect a kick."

When the kick finally came, Mojžiš showed that he had prepared long and well. But the church asylum protected only his company, not his person. "I can't even stroll down the street," he said. "That means more to me now than a luxury car."

Mojžiš has spent the last six months in hiding at locations around Banská Bystrica and abroad. "I'm no Schwarzenegger, Stallone or [anti-Nazi freedom fighter Július] Fučík," he said, adding that his family, a wife and three kids, ages 13, 10 and 6, have to share his fate.

"Especially for the kids it is hard time," Mojžiš said. "It's not a normal life for them. You know, sometimes when I see them crying, I feel an enormous hatred towards these people. I know I shouldn't, but I do - for the ruined months of their childhood."

Tóth's crusade against organized crime is hard on his family too. His wife gave birth to their second child just one month after his car was firebombed. "I can't say that my wife encourages me to continue," he said. "She says that nothing has changed [in spite of my work], that our car was still burnt. But she understands what I have to do."

Mojžiš agreed that at the heart of his quest lies an ethical, even philosophical question. "We all must think of our deeds and their consequences," he said. "As long as I can make sure that my deeds don't support evil, I have to do it. I didn't want anything of what we have created to support evil."

However, Mojžiš conceded he feels fear. "This is not a picnic anymore, lives are at stake here," he said. "You see it yourself, finding shot or burned people with their legs tied up has become normal."

"I would be lying if I said I wasn't scared," Tóth seconded. "But on the other hand, if I can do something to protect society from state terrorism and from Mafia infiltration of the state, I want to do it."