On March 3, Vladimír Mečiar's government used Presidential powers inherited the day before from outgoing President Michal Kováč to cancel a second referendum on direct Presidential elections and NATO membership that had been called for April 19.
Because Mečiar and other senior HZDS officials had hinted previously that they would quash the plebiscite, the move did not take the opposition entirely by surprise. A protest meeting was called immediately for March 5 on Bratislava's SNP square, and drew an audience of 15,000 demonstrators. 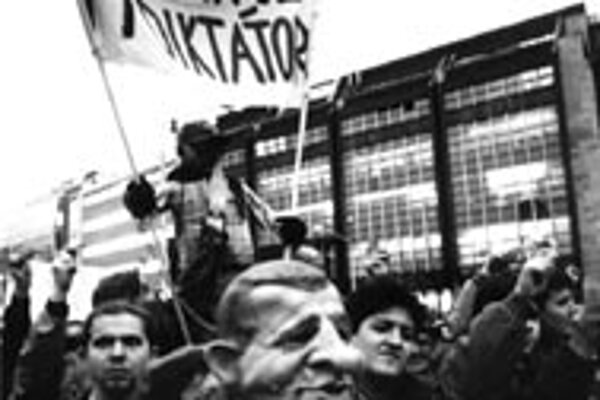 Font size:A-|A+  Comments disabled
On March 3, Vladimír Mečiar's government used Presidential powers inherited the day before from outgoing President Michal Kováč to cancel a second referendum on direct Presidential elections and NATO membership that had been called for April 19.

Because Mečiar and other senior HZDS officials had hinted previously that they would quash the plebiscite, the move did not take the opposition entirely by surprise. A protest meeting was called immediately for March 5 on Bratislava's SNP square, and drew an audience of 15,000 demonstrators. Amid crowd chants of "Throw Mečiar in jail!" and "Shame!" the Slovak Democratic Coalition (SDK) leaders announced that a new petition drive would be launched on March 25.

But even a successful petition drive may not repair the damage done on March 3 to the rule of law in Slovakia. Legal experts said that Mečiar's decision was a direct violation of last May's Constitutional Court (CC) decision, while foreign observers said the move invited further violations of the law in the months to come.

"Calling off the referendum is the road to hell and legal chaos," said Ernest Valko, a legal expert and former Chairman of the Czechoslovak Constitutional Court. "A CC verdict of May 21, 1997, ruled that an already called referendum cannot be cancelled, even by the President himself," Valko explained.

The US State Department issued a statement on March 6 saying that the decision to call off the referendum is "not consistent with the behavior of a government which respects the rule of law. [It invites] further abuses of the law and the constitution by those who claim to be serving the national interest."

But according to a HZDS statement issued on March 4 in defense of its actions, the government could not suffer the April 19 referendum to take place because it was unconstitutional and "[did] not have a legal basis."

The government maintained that by combining two issues - direct election of the President and NATO membership - into one plebiscite, Kováč had "deprived [citizens] of the possibility to make a free choice of which referendum they will participate in."

The HZDS used the same argument to mar a previous referendum on the same issues, called by Kováč for May 23-24, 1997. But according to Valko, "the CC never said that combining the four questions was in contradiction with the law. The [May 21, 1997 CC] decision is clear on this."

In spite of the CC decision, Interior Minister Gustáv Krajči struck the question on direct election of the President from all ballots. Less than 10 percent of Slovaks ended up voting on the remaining three NATO questions, and Central Referendum Committee Vice-Chairman Jozef Krumpolec declared on May 27 that "the total number of eligible voters taking part in the vote was nilÉthe number of citizens [who voted] cannot be assessed because no [valid] ballots were delivered."

According to Article 98 of the Constitution, the results of a referendum are only valid if more than 50 percent of voters participate, meaning that the May 1997 referendum was invalid and therefore could legally be repeated on April 19. But the HZDS maintained that "[last year's] referendum is valid because neither the President nor any other authorized entity submitted a complaint to the Constitutional Court." And holding a second referendum on the same issue within three years, the HZDS said, contravened Article 99, paragraph 2 of the Constitution.

"Arguments that no-one complained about the marred referendum, and that the results are therefore still valid, are just perverted," Valko said. "I have nothing else to add to this, except that the government had no right to cancel the referendum - it was only allowed to ask the CC to rule on whether it had been announced legally or illegally."

In the wake of the HZDS decision to quash the new referendum, the SDK, accompanied by the Hungarian Coalition (MK) and the Party of Democratic Left (SDĽ), said they would launch a petition drive as the first step in demanding a new referendum on the Presidential election issue, and this time would omit the NATO questions. A petition requires 350,000 votes to force a referendum, but SDK leaders said they were confident of securing enough support given that last year's petition was signed by over half a million citizens.

The petition drive was also meant to serve as the first act in a general public mobilization campaign that would culminate in September's general elections. "We expect this to become the biggest petition in the history of Slovakia, and we will organize it by June," said Ivan Šimko, Vice-Chairman of the Christian Democratic Movement (KDH) and a leading member of the SDK. "We will ask the government in its role as president to call a new referendum on the same day as the general election."