In 1989, Slovakia slew the hydra of Communism, only to see another beast put forth its ugly head. This monster is known around the world as organized crime. For a country such as Slovakia, which has no historical experience of such a phenomenon, organized crime's increasingly ruthless and brutal tactics imperil the nation's democratic and economic transition by sapping people's will to stay the course. People are having an increasingly difficult time reconciling their increased economic prosperity and freedom with the loss of their security and sense of safety. In this special five-part series, The Slovak Spectator looks at the roots of organized crime in Slovakia and how it affects people's lives, explores the inside workings of Slovak jails, examines the relationship between the Mafia and state authorities and asks what these authorities are prepared to do, not only to fight this new beast but actually to kill it. 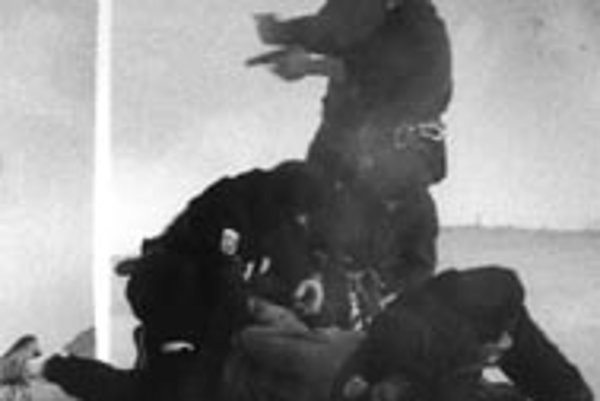 Font size:A-|A+  Comments disabled
In 1989, Slovakia slew the hydra of Communism, only to see another beast put forth its ugly head. This monster is known around the world as organized crime. For a country such as Slovakia, which has no historical experience of such a phenomenon, organized crime's increasingly ruthless and brutal tactics imperil the nation's democratic and economic transition by sapping people's will to stay the course. People are having an increasingly difficult time reconciling their increased economic prosperity and freedom with the loss of their security and sense of safety. In this special five-part series, The Slovak Spectator looks at the roots of organized crime in Slovakia and how it affects people's lives, explores the inside workings of Slovak jails, examines the relationship between the Mafia and state authorities and asks what these authorities are prepared to do, not only to fight this new beast but actually to kill it.

On February 3, shortly before 5 p.m., a ten-kilogram bomb that had been placed in the trunk of a red Lada exploded in the parking lot of Košice's main train station, wounding four people and causing a million Sk in damage. One of the wounded was identified by Slovak newspaper dailies as "Dušan B.", an underworld figure who had been linked to Košice Mafia boss Róbert Holub. Holub was killed by machine gun fire as he lay in a Bratislava hospital in October 1997, having narrowly survived a previous assassination attempt in one of the capital's hotels.

The Košice bombing was but another example of a phenomenon that has come to dominate Slovak public and private life - organized crime. Police and Interior Ministry officials say they are doing their best to contain Mafia groups, but with little money and ancient equipment, they are increasingly overwhelmed by rich, well-organized gangs of criminals. Evidence is now emerging to suggest Slovak citizens' perception of the advantages of economic and political transformation is being seriously challenged by the Mafia violence and social upheaval that has accompanied the change.

One ugly side of the rise in crime over the past two years has been the Mafia's blatant use of brutal force. Police officials warn that the future could be even more violent. "In five to seven years, organized crime will stop increasing," said Peter Ondera, spokesman for the Interior Ministry. "However, although it may not be as brutal within Mafia circles, violence will turn against those who try to fight it - politicians, businessmen and lawyers."

According to crime experts, organized crime in Slovakia has successfully overcome all postnatal troubles and is now ready to mature. "Slovakia is experiencing the first stage of organized crime development, according to experts from Interpol," said Ondera.

Ondera compared the organizational level of the Slovak Mafia to that seen in the era of Al Capone in Chicago in the 1930's. "Mafia groups are spreading around the country, gradually establishing their contacts in regions and becoming more brutal," he said.

Mafia groups are gradually moving away from city centers to lessen their exposure, and crime bosses have managed to avoid almost all publicity. "High-ranking Mafia members, like the well known figure 'Žaluď of Bratislava's underworld, have some kind of business operating to hide their activities," said Ondera. These hidden activities are manifold, experts say, but Slovakia's organized crime scene has become focused mainly on stealing cars, drug dealing, extortion, and prostitution.

As in many other countries, organized crime in Slovakia's is not exclusively a business for natives. A great part of the Slovak Mafia hails from abroad, as organized crime groups in Central Europe increase their level of cooperation.

Currently there are two basic types of Mafia groups, according to Ondera. "There may be three or four Russians, Ukrainians, or Yugoslavs who come here and form a group of Slovaks around them," Ondera explained. "Another way is that a group of Slovaks form these ethnic groups around them. Slovaks get Ukrainians or Chechens involved, because they will do the dirty work for less money than Slovaks."

It is hard for police to pin down the nationalities of Mafia players because they easily blend into Slovak society. "Most of these men are here legally," said Jaroslav Penc, the director of Bratislava's downtown First Police Precinct. "They pay 50,000 Sk to a prostitute to get married, and then become citizens of the country."

But Vasic Sitar, political advisor at the Ukrainian Embassy in Slovakia, felt it was wrong to pin the blame for Slovakia's Mafia problem on any one nationality. "It is not only Ukrainians involved in the Mafia," he said. "Organized crime is international. Just as Ukrainians operate here, Slovaks do the same in Ukraine."

But it is thanks to this cross-border exchange of 'help' that Slovak authorities are losing the war with the Mafia. It has become, in fact, a game of numbers: for every four to five criminals there is only one specialized law enforcer to match them.

"There is a sizeable Mafia group in each [of the eight Slovak regions]," Ondera said. "Every group has 100 to 150 members, sometimes more, while of course some regions have more than one group."

To fight the many-headed hydra, each regional police headquarters has its own ÚOU (a special SWAT-like police squad), known commonly as the "black masks". Each unit contains 25 to 30 people, with the biggest force based in Bratislava. The ÚOU checks and sweeps bars for drugs and weapons, and helps police arrest dangerous individuals.

However, some ÚOU raids have created the impression that the Interior Ministry, responsible for all police forces, is using these units too liberally and without proper oversight. Complaints have been lodged by citizens against the ÚOU's brutality during raids of clubs in Žilina and Nové Mesto nad Vahom, after which dozens of innocent people needed medical treatment.

The reason for these injuries, according to Penc, is that the "black masks" are understandably tense before entering a potentially hostile situation. "Just imagine," said Penc. "They bust into a bar after being told there may be armed individuals inside. They check someone and the guy reaches into his coat pocket to get his ID out to prove he is not the guy they're after. But the 'black mask' officer is not thinking about an ID card. He expects a gun, so he makes sure that he is not killed," he explained.

Penc added that lot of the fears and misunderstandings about ÚOU units could be solved by informing the public about their missions and explaining how people should behave in case of contact with the black masks. Instead, Penc said, everything is kept top secret, ostensibly to increase the effectiveness of the units and protect officers from retaliation by criminal elements.

But the greatest shortcoming for the police is their lack of the modern equipment needed to fight the Mafia. "We cannot chase someone driving a Mercedes while sitting in a 20-year old Russian-made Lada," said Ondera.

Police all over the country are being outmatched by rich Mafia thugs. "In my district, we have one car, which does not always run, for 20 policemen," explained Penc. "There are 25 policemen per computer, and one mobile phone for the whole district of 400 people." The precinct can provide a walkie-talkie for each of its officers, Penc conceded, but added the hand units are technically so flawed that policemen cannot communicate even at short distances, and have given the devices the derisive nickname 'I see you, but I can't hear you.'

It is not surprising, then, that law enforcers have been led astray by the promise of more money and better "working conditions" on the other side of the law. Ondera confirmed that there were many former and current police officers working with the Mafia. The police, he said, were trying to fight this phenomenon through a special unit designed for the investigation of corrupt police officers. "This is not a pleasant job for most policemen, to gather information on their colleagues," Ondera said.

But the results have justified the unpleasantness. Last year, 167 of 20,200 policemen were convicted of cooperation with the Mafia. More than half of the convicted personnel had been with the police for less than five years.

Penc admitted that bribery had become a massive phenomenon within the police corps. "Policemen are human too, and they can be bribed just like anybody else," he said, adding that the best remedy would be to increase the ridiculously low salaries of law enforcers.

"If policemen had higher wages, I believe that this would not be happening," Penc said. "If the Ministry would double the [current] average salary of 7,500 Sk, then we could choose the people we want to have here. Now, we basically have to take whoever wants to join us."

The United States Information Service conducted a survey last October in six central and eastern European countries. The study asked inhabitants to assess the influence of organized crime in their country. According to the results, 78 percent of Slovaks believed that the influence of the Mafia was large, while only 17 percent believed it to be small. The fact that Slovakia trailed only Poland (ratio 72:20) and the Czech Republic (74:21) while being better off than Hungary (78:16), Bulgaria (79:7) and Romania (80:15), is hardly reason to celebrate.

Even more ominous was the outcome of the second question, in which people were asked to compare the level of political corruption that exists in Slovakia today with the level which existed during Communism. Only 32 percent of Slovaks believed that political corruption has declined since the Communist era, while 59 percent felt it had risen. This response puts Slovakia way behind its regional neighbors (see chart) and suggests that organized crime has begun to erode people's determination to continue with their country's political, economic and social transition.

But Ondera said he believes that society will wake up and fight against organized crime once it fully realizes the massive threat it poses. Lubelcová also seemed to believe in Slovak society's self-purging powers. "In Italy it had to get to the point where the Mafia became involved in the state administration. That was the breaking point," she said. "We'll see if we have to get to that point in Slovakia."