Travellers approaching Bratislava from Graz get their first glimpse of Slovakia as they drive through the Austrian hamlet of Kittsee. Many are unprepared for the sudden vista of Petržalka's housing estates, massive and grim on the horizon. The dour face of socialism is not easily forgotten.
What lies behind that face is equally striking. Petržalka's roads are like windswept canyons between12-story apartment buildings that may sprawl up to 300 meters in length. Public areas are filthy with refuse, while knots of children collect aimlessly on street corners, waiting for something to happen. 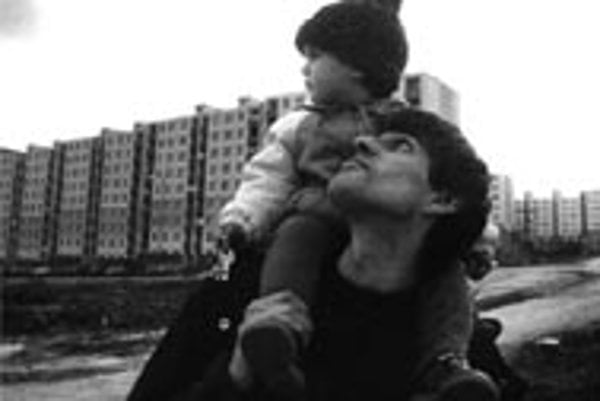 Font size:A-|A+  Comments disabled
Travellers approaching Bratislava from Graz get their first glimpse of Slovakia as they drive through the Austrian hamlet of Kittsee. Many are unprepared for the sudden vista of Petržalka's housing estates, massive and grim on the horizon. The dour face of socialism is not easily forgotten.

What lies behind that face is equally striking. Petržalka's roads are like windswept canyons between12-story apartment buildings that may sprawl up to 300 meters in length. Public areas are filthy with refuse, while knots of children collect aimlessly on street corners, waiting for something to happen.

Help for residents is still some way off. Real estate agencies have prepared numerous utopian plans for business centers and retail complexes over the years, but all of them have been studiously ignored by investors. High levels of crime and drug abuse have given Petržalka a bad name and scared developers away, while the scarcity of investment has in turn hastened the area's economic and social decay.

One study of Petržalka, done in 1996 by Intermanagement, a Bratislava development company, advised that increasing job opportunities and repairing the absurd deficit of cultural, sports and leisure facilities should be "the main ideas of the social and economic development of Petržalka." Without a real business or cultural center, the company reported, "the city has become characterized by economic passivity, which has translated into social and cultural passivity."

But the project that Intermanagement proposed, a massive 45 hectare, 1.4 million m2 complex for cultural, social, business and leisure activities, was nixed when Petržalka City Council sold part of the land to Metro a.s., the company which has the contract for the Bratislava Subway project. Miloslava Podmajerská, Council spokeswoman, said that "after we solve the problem of where the [subway] tunnels will go in Petržalka, we can solve the problems surrounding the commercial use of the [Intermanagement] site. But that's far in the future."

Many other grandiose schemes have died similar deaths. Michael Walshe, a partner in the real estate development company City Pro, recalled a $100 million, 43,000 m2 retail and leisure project, known as PCC, that he had been involved with in 1996. The project had been shelved for lack of investor interest, he said. "One reason for Petržalka's problems with attracting investment may be that the city is painted with a 'wrong side of the tracks' stigma," he explained. "Anywhere south of the Danube is seen as a second-best location, which is such a silly prejudice."

The roots of investor prejudice lie in the widespread belief that Petržalka is on a downbound train towards social collapse. The city's rates of abortion, divorce and crime are among the highest in Slovakia, a picture of human despair that is set against Petržalka's monstrous architecture and desolate open spaces.

The city's boosters argue that Petržalka's citizens are the most educated and among the wealthiest, but the figures they adduce are difficult to reconcile with the ominous evidence of social decline. A bright, well-off people with horrendous social and family problems - this is the Petržalka paradox, a riddle that must be solved before large scale real estate investment can occur.

"Petržalka has the highest level of education in Slovakia," said Vladimír Bajan, a Democratic Union deputy and the mayor of Petržalka. "78 percent of Petržalka inhabitants have finished secondary school or university. Moreover, the average income is very high."

But Bajan conceded that Petržalka's education and income figures seemed incongruous given the city's high divorce, abortion and crime rates (please see chart this page). "The reason for this paradox lies in the difficulty of finding jobs in Petržalka itself, and the fact that more than 100,000 Petržalka inhabitants leave their homes every single day to cross the river [to jobs in Bratislava] and come home late at night," he confessed.

In Bajan's view, these long working days have increased marital stress, while absentee parents have resulted in neglected children turning to delinquency and drugs. "There is a huge problem with drug dealers and the high numbers of children abusing drugs," he said.

At a February 19 press conference, Milan Csaky, the head of Bratislava's District 5 (Petržalka) administration office, reported that 70 percent of all Slovak drug addicts live in Petržalka, and said the city's 25,000 children were seriously at risk.

Bajan agreed, and stressed the need for programs to get kids off city streets. "We should remember that the communist regime had one great advantage, and that was leisure time organized for kids by schools," he said.

Walshe said that he had always considered Petržalka a "fascinating suburb," and argued that "it is intrinsically a viable residential community - town planning in terms of city landscape is basically correct, traffic movement is almost too good, the ratio of open to built space is adequate."

But for Walshe, flawed architectural thinking has made Petržalka a depressing place to live. "The built space contains some appallingly large buildings," he said.

"They are so big that each building could become a separate community. This was in the mind of the original French designers, who put a grocery shop in every building. But now you have a wide scattering of very poor quality shops and a city with no center."

In 1973, Petržalka was a peaceful, centuries-old town of roughly 14,000 when the communist Czechoslovak government of Gustav Husák decided to give in to the demands of large Bratislava-based companies, like the oil refiner, Slovnaft, for a conveniently located labor force.

"All the people who were moved into these buildings were immigrants from middle and eastern Slovakia," said Petržalka resident Štefan Šlachta, Rector of Bratislava's Fine Arts University. "Some people had more success adjusting to the move than others, but many had problems putting roots down, and this is the reason for the high divorce rate," he argued.

"Many couples had no contact with their families, so when their marriages ran into problems there was no one to help or control the situation."

Brigita Schmögnerová, vice-chairman of the Social Democratic Party (SDĽ) and long-time Petržalka citizen, agreed that "the majority of the city's population are those who used to live outside Petržalka and have no relation to it. They don't care what happens one meter outside their flats."

Walshe blamed this sense of alienation on the fact that residents had only the door of their flats to separate their homes from increasingly dangerous public areas.

"All the front entrances of the buildings are open, meaning that anyone at all could come up and knock on your door. So, people are nervous of their neighbors, there is no sense of community, but instead a great feeling of indifference and powerlessness."

Many residents say that it is this feeling of indifference to neighbors and to public areas that is at the root of many social evils. Crime flourishes, social fragmentation increases and common areas like parks, streets and stairwells become dirty, dangerous places.

"Bad environments attract bad people," warned Šlachta. "Everybody wants to get out of Petržalka, but they can't, there's nowhere else to go," said Walshe.

Urban planning experts have long claimed that projects to "humanize" Petržalka, through increasing property security, green spaces and leisure facilities, must precede large-scale business and retail projects. Walshe, for his part, agreed that it was "perfectly possible to renovate buildings, to turn Petržalka into a livable area. Most people are very keen on having increased security, even at a cost."

But "humanization" studies, such as one carried out in 1993 by the Demography and Human Geography Department of Bratislava's Comenius University, have never been able to resolve the question of financing. "It can't be done, it's too expensive," said Šlachta. "We are not such a rich society."

The project, which would involve anywhere from 20 to 100 thousand m2, would cost around 2 billion Sk. Kaník admitted that no contracts had been signed with investors and that ground would not be broken until spring 1999, but swore the NAS project would not go the way of all previous Petržalka development schemes. "The center [of Bratislava] is filling up, there is nowhere else to build," he said. "Now is our time."