PRIME Minister Mikuláš Dzurinda told the members of the European Parliament's Foreign Affairs Committee on March 19 that Slovakia regarded laws passed in Czechoslovakia at the end of World war II expelling Germans and Hungarians and confiscating their property as "a dead issue".
He insisted that opening the matter could have "dangerous" and "far-reaching" international consequences.
Under close questioning by an Austrian member of parliament, Johannes Swoboda, as to whether Slovakia would ensure that the controversial 1945 'Beneš Decrees' did not support current discrimination on the basis of ethnicity, Dzurinda said that people who felt unjustly treated could lodge complaints "with the appropriate bodies". 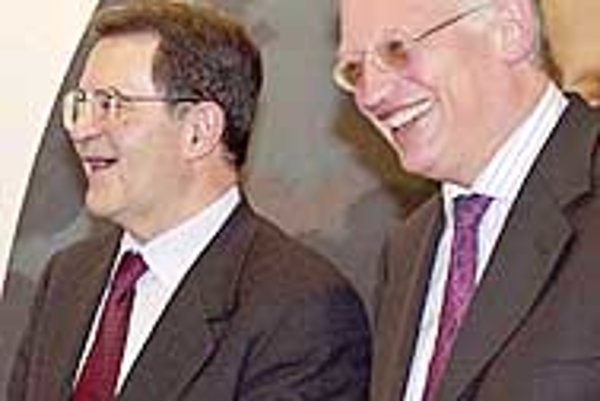 Font size:A-|A+  Comments disabled
PRIME Minister Mikuláš Dzurinda told the members of the European Parliament's Foreign Affairs Committee on March 19 that Slovakia regarded laws passed in Czechoslovakia at the end of World war II expelling Germans and Hungarians and confiscating their property as "a dead issue".

He insisted that opening the matter could have "dangerous" and "far-reaching" international consequences.

Under close questioning by an Austrian member of parliament, Johannes Swoboda, as to whether Slovakia would ensure that the controversial 1945 'Beneš Decrees' did not support current discrimination on the basis of ethnicity, Dzurinda said that people who felt unjustly treated could lodge complaints "with the appropriate bodies".

Dzurinda's speech was an important chance for Slovakia to respond to rising pressure from Hungary, Germany and Austria to bring the decades-old laws into line with European Union standards before entering the 15-member bloc as early as 2004. Almost a month ago, Hungarian Prime Minister Viktor Orbán told the same European Parliament committee that the decrees were incompatible with Czech and Slovak EU entry.

"I agree with Dzurinda," said Vladimír Bilčík, an analyst with the Slovak Foreign Policy Association think tank. "Any revision of the results of the second world war is dangerous. I don't think we should bring up the past, and Slovakia is now in a very different situation than Czechoslovakia in 1945.

"At the same time, I think we need to talk about the decrees, to put them not just in a Slovak-Hungarian context, but in the context of the second world war as a whole. Similar unjust provisions were made by other countries in different parts of Europe, such as Holland or Luxembourg. The Beneš Decrees were not unique."

Under the Beneš Decrees, named after then-Czechoslovak President Eduard Beneš, some 2.5 million Sudeten ethnic Germans were stripped of Czech citizenship, had their property confiscated and were deported in retaliation for German and Hungarian annexation of Czechoslovak territory in 1938. About 40,000 ethnic Hungarians were also forcibly resettled from Slovak territory to Bohemia in a bid to weaken a large Hungarian minority in Slovakia.

The leaders of Austria, Hungary and two German states have demanded that the decrees be finally annulled. "There's a strong suspicion that these decrees have a discriminatory effect to this day," Austrian Chancellor Wolfgang Schüssel said after talks in the northern Hungarian town of Esztergom on March 13.

"In a future Europe there is no place for shadows of the past which are based on discrimination," Bavarian State Minister Erwin Huber said. The German state of Baden-Wurttemberg also took part in the talks.

With elections due this year in Hungary, Germany, the Czech Republic and Slovakia, the Beneš controversy is expected to remain in the spotlight. Bilčík said that nationalist and conservative forces in Germany, Austria and Hungary had formed an alliance of convenience on the issue that served their domestic political interests.

Many of the Germans expelled from Czechoslovakia went to Bavaria, the political homeland of Premier Edmund Stoiber, the main challenger to Chancellor Gerhard Schroeder in nationwide elections in September.

"This issue is neither a legal one nor a civil one. It's political, and that's how we have to confront it," said Dzurinda in Brussels.

The Slovak stance on the decrees has won clear support from EU officials. European Commissioner for Enlargement Günter Verheugen described the Beneš Decrees as "defunct" and said the EU wanted the Czech Republic and its neighbours to put the issue behind them.

Verheugen has said in the past that the Beneš Decrees would not be a factor in the EU accession negotiations. "We should not burden the pre-accession process with relics from the past," he said.

Slovak Deputy Foreign Minister Ján Figeľ, the country's main EU negotiator, told The Slovak Spectator that the Beneš Decrees issue was in fact not as one-sided as Slovakia's critics claimed.

"For one thing, there is a common misunderstanding that the Beneš Decrees were against all Hungarians and all Germans. That's not so - they were against enemies of the state, while anyone who participated in anti-fascist activities or resistance continued to be a normal citizen and was excluded from the scope of the measures.

"Then in 1946 the Slovak and Hungarian parliaments came to an agreement on a population exchange concerning 74,000 citizens on both sides. The exchange included property, and was approved by the parliaments of both countries. This act does not bear much relation to the Beneš Decrees, but it shows that policy towards the Germans was different than policy towards the Hungarians. Hungary occupied southern Slovakia, was defeated in war, and part of the Hungarian population - about 40,000 people - was then sent to western Bohemia to replace the Sudeten Germans. But they later returned to Slovakia."

Figeľ said that while officially cancelling the decrees would make little difference today to those who had been deported, since the laws had been superseded by later legislation, it could lead to unforeseen consequences.

"The decrees are still on the law books, and theoretically parliament could adopt a decision saying item x, y or z is not valid any more. But the decrees have already been superseded by other acts adopted in 1948, in the 1950s, and abolishing them would just open a Pandora's Box of unpredictable developments such as claims for restitution."

Figeľ, like Dzurinda, noted that the Slovak parliament in 1991 had expressed regret for the fate of the country's 'Carpathian Germans', and said anyone who still had a complaint should file it with a court.

The Carpathian Germans, who originally lived in Slovakia but were resettled during world war two, returned to Slovakia to find many of their homes occupied and property confiscated. Some 5,400 people of German descent still live in Slovakia today.

"We are ready to repeat what we said in 1991, that we denounce all acts of collective guilt, but even then we made a clear distinction that those who had been against the Nazi regime had not been affected by the measures. Any citizen or group with a complaint can claim their rights here in Slovakia or at the Strasbourg Court of Human Rights. That's our recommendation - don't politicise history."