EASTER is one of the few Christian holidays that does not have a fixed date on the Julian calendar. It obeys the lunar calendar, falling on the first Sunday after the full moon, keeping time with the rhythm of nature and pre-Christian traditions. 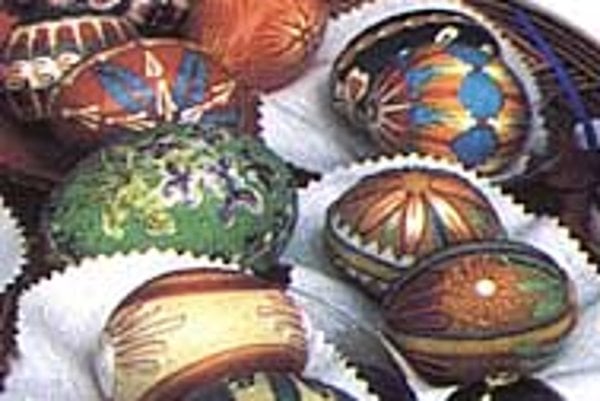 In the same way, one of the most time-hallowed Easter traditions - decorated eggs - derives from prehistoric rites rather than Christian teaching.

"The egg is a symbol of the circle of life, of its infinity and immortality," says ethnologist Viera Feglová. "Colours are symbolic as well. They express spring and youth. Anthropologists have discovered that some colours, such as violet, are even genetically 'codified' as 'good'."

With Slovak Easter fast approaching, decorated eggs can be bought in shops and market places all over the country. Large collections of colourfully designed eggs may be seen at many exhibitions, and decorating techniques are explained at open workshops.

Apart from being a symbol of Easter, the humble egg has gained other meanings over the centuries. "It was used in magic. Its shape represented perfection and proportionality. Very frequently it was used as a means of exchange in trade. It was an important symbol of sacrifice especially during the spring, when pieces of shell were put in furrows where cabbages were grown to ensure a bountiful crop," says Feglová.

The oldest existing decorated egg, painted red, was found in the pyramids in Egypt; other examples were later discovered in graves in Asia Minor in 3000 BC. Exhumations of 7th century Slavic graves also found decorated eggs. Ethnologists have no explanation of the mysterious journey of egg symbolism to Slavic lands, but there's no denying the richness of regional traditions that have evolved around the egg.

In Slovakia these traditions are still very much alive and almost innumerable. Zuzana Špániková, 35, is a folk artist who specialises in egg decoration in Domaniža, a village of 3,500 inhabitants near Žilina in northern Slovakia. She learned her craft from Štefánia Dudáková, who is famous around the country for her 'Domaniža' style Easter eggs.

"I was born on Easter Sunday, so I probably have it in my blood. Our home was always like a factory before Easter night. I was responsible for decorations, and my family for other things - blowing the contents of the egg out, colouring and heating," says Dudáková.

The general technique Dudáková practices is called 'batik', but it is enriched with local motifs. Symbols and pictures are etched on the egg's surface in wax, using a pin or tiny metal tube. The egg is then submerged in dye, and the wax removed with a warm cloth. The colour of the waxed areas is thus protected.

"Lily of the valley, fir-branch, small and big spider, and sun are typical patterns you find on Slovak eggs, and all carry their own meanings and traditions," explains Dudáková.

Batik is only one of a range of traditional techniques which accentuate the natural colour of the egg. The egg can be blown out or boiled together with herbs that provide colours resistant to heat - onionskin, cereal stems and other plants. Later, leaves may be applied to give a foliate pattern to the eggshell.

While straight-forward egg painting is perhaps the most frequent technique, other means of decoration involving cut straw are still practices.

Newer techniques reflect the development of local crafts and use motifs from folk costumes. Wrapping eggs in wire is typical in northern Slovakia, which is known for its tinker tradition. The egg may be also decorated with wool, leather or other materials such as lace.

"Lace reflects so many different influences and eras such as German colonisation, Italian and Czech presences," says Tereza Vitková, a lace technique instructor at the Klub 22 cultural centre in the Bratislava suburb of Petržalka. "It's even more difficult to decorate eggs than clothes, because you have to be able to imagine a big image on a tiny surface."

Many Slovaks today who decorate eggs using historical techniques say they do it more for relaxation than because they identify with pre-Christian rituals. "Ninety-five per cent of the people who decorate eggs do so for their own purposes, largely commercial. Before it never used to happen that women from Košice would come to Bratislava to sell eggs. But we're also seeing a general revival of traditional techniques, because people these days feel the need to work with natural materials in their hands. It's a form of therapy," says Feglová.

Slovak decorated Easter eggs are also popular abroad. "If I wanted to visit all the eggs I've sent as gifts and souvenirs abroad, I would have had to travel around the world," says Vitková.

But the commercial world is catching up with Slovak egg artists. "An interesting thing happened in a big souvenir shop in Boston," recalls Feglová. "One year they were selling original Easter eggs from Slovakia, and the next they had eggs with Slovak Easter motifs which had been made in Thailand for next to nothing."

Easter eggs and other Easter folk souvenirs can be bought in ÚĽUV shops around Slovakia:
Bratislava on Obchodná 64 and Nám. SNP 12, Banská Bystrica on Nám. SNP 7, Košice on Hlavná 76 and Trnava on Hlavná 5.
For more information and photo samples go to www.uluv.sk.
Tel: 02 5273-1361.