Slovaks making most of freedom to carry guns

SINCE 1993, the number of Slovaks who own gun licenses has almost doubled. Along with the growing number of gun owners, crimes committed with guns have been increasing every year.
Police, gun owners, and gun retailers agree, however, that society should be worried about illegal arms holders, rather than those who own official gun licenses and gun purchase approvals.
While in 1993 61,595 individuals owned gun licenses, eight years later the number had grown to 121,280 people, who jointly own 194,318 guns, say statistics provided by the Police Presidium headquarters in Bratislava. 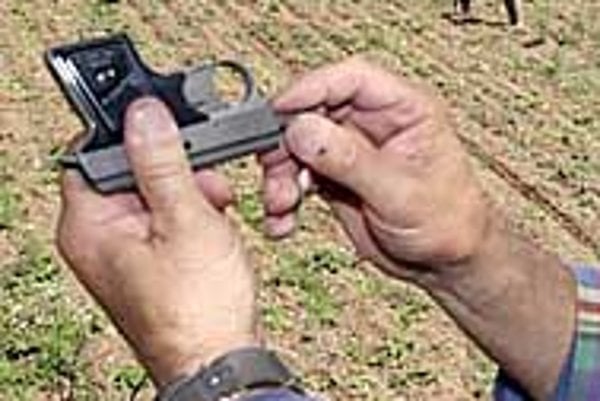 Font size:A-|A+  Comments disabled
SINCE 1993, the number of Slovaks who own gun licenses has almost doubled. Along with the growing number of gun owners, crimes committed with guns have been increasing every year.

Police, gun owners, and gun retailers agree, however, that society should be worried about illegal arms holders, rather than those who own official gun licenses and gun purchase approvals.

While in 1993 61,595 individuals owned gun licenses, eight years later the number had grown to 121,280 people, who jointly own 194,318 guns, say statistics provided by the Police Presidium headquarters in Bratislava.

Police officials see the growth as an expression of the freedom that society gained after the fall of communism in 1989. Until then the number of hand gun permits was strictly limited by the state, and reserved largely for top state officials.

The Police Presidium's Róbert Ergang said that "while applications for gun licenses have grown since 1989, I don't expect it to grow forever.

"People who apply for gun passports want to feel safe and secure. Guns give them this feeling," Ergang said.

He said that many people who owned a gun license had weapons they used for sports and hunting.

The gun craze has also taken root among politicians like independent member of parliament (MP) Diana Dubovská, who owns a pistol and two hunting guns.

Gun shop owners said they had seen an increase in business revenues over the past decade. Mária Mišáková, the owner of a small gun shop in Rimavská Sobota in eastern Slovakia, said that gun buyers were "as a rule young and middle-aged businessmen".

Another gun shop owner from western Slovakia, who asked not to be named, said: "I fully agree with people who decide to have guns.

"Today you never know what can happen to you and many people, especially businessmen, may meet with various criminal groups. Having a gun gives them a feeling of greater safety, and if they have the legal documents to own a gun, I don't see why this should be a problem."

The number of violent crimes involving the use of weapons rose by about 10 per cent from the year before to 2,614 in 2001, stated an Interior Ministry report on security in the Slovak Republic; 437 of these cases involved guns.

Ergang from the Police Presidium said, however, that the majority of crimes were committed with illegally-owned guns, adding that last year police confiscated 2,583 illegal guns.

A 26-year-old gun owner who works in the security sector and who wished to remain anonymous agreed that illegal guns represented a greater danger for society than registered weapons.

He said, however, that for safety reasons he carried his gun with him even outside work.

"I've met many kinds of people in my life and had some bad experiences with them. I was involved in several violent conflicts. I was attacked with baseball bats, I was robbed and threatened several times. With the gun I feel safer."

He said that he had pulled his gun in a dangerous situation but said he "wouldn't recommend it".

"You never know what can happen. And you can't know who you're facing."

He said that many businessmen who bought guns did so because "they don't have the money to pay a private security service. Owning a gun gives them the feeling of certainty that should something bad happen they can protect themselves."

Mário Adamík, editor-in-chief of an internet web site about guns (www.zbran.szm.sk), said he thought that the increase in the number of crimes committed with guns was related to the "decay of social values and to the entry of various interest groups from the East".

Ergang said that in order to bring Slovak gun legislation closer to the European Union norm, gun laws were tightened in 2000.

He said that the new law included a ban on drinking before using a gun, and a ban on keeping guns in parked cars.

But an activist from Jedlo namiesto zbraní, the equivalent of the US Food for Bombs, said that the problem was as much ethical as legal, and that solving it would require leadership rather than gun promotion from politicians.

"Guns and drugs have one common denominator: They cause death. When you see MPs publicly admitting they carry guns to parliament, you can't help wondering where this society is heading," said Eduard Chmelár, the coordinator of Jedlo namiesto zbraní.