THE GOVERNMENT will maintain its generous support of mortgage banking despite recommendations from the International Monetary Fund (IMF) to lower its subsidies to avoid a high public finance deficit.
During their latest mission to Slovakia on March 13, representatives of the
IMF suggested a cut in the 4.5 per cent state subsidy on mortgage loan interest as one way of reducing government spending to make year-end deficit targets. 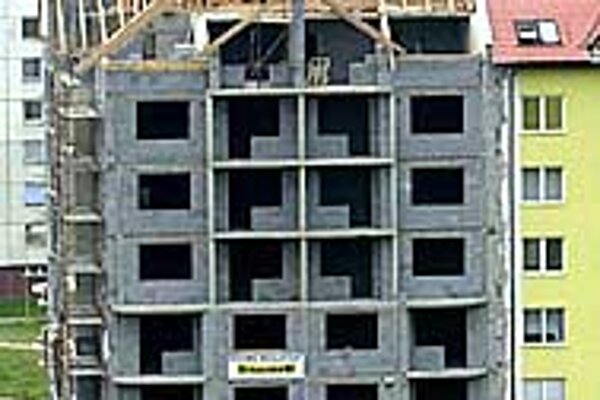 Font size:A-|A+  Comments disabled
THE GOVERNMENT will maintain its generous support of mortgage banking despite recommendations from the International Monetary Fund (IMF) to lower its subsidies to avoid a high public finance deficit.

During their latest mission to Slovakia on March 13, representatives of the

IMF suggested a cut in the 4.5 per cent state subsidy on mortgage loan interest as one way of reducing government spending to make year-end deficit targets.

However, government representatives and economic analysts said that lowering mortgage subsidies would not substantially cut the shortfall in public finances, which is projected at Sk36.8 billion, or 3.5 per cent of expected GDP.

The government is planning to spend as much Sk226.5 million ($4.7 million) on subsidising mortgages this year, Sk139 million ($2.9million) more than in 2001. The strategy is designed to help alleviate Slovakia's housing shortage, estimated at 350,000 units.

Juan Fernandez-Ansola, the head of the IMF mission to Slovakia, said the government was not reducing the subsidy despite a substantial fall in bank interest rates, which had made mortgages cheaper in the last year.

"Interest rates have fallen considerably, meaning that the government subsidy should fall more progressively. With such a high donation, demand for mortgages is likely to grow, which would mean more expenditures for the budget," he said.

In 1999, when mortgage banking started in Slovakia, the government subsidy stood at 6 per cent, but it has since been lowered to the current 4.5 per cent.

The cheapest mortgages in Slovakia now go at an interest rate of 4 per cent, one of lowest in the region.

But Ján Tóth, an analyst at ING Barings, said that a larger appetite for loans would not be a major burden for the budget as mortgage banking was still relatively undeveloped in Slovakia.

"It's true that the subsidy is unusually high and the final rate on the mortgage is therefore lower than in more developed countries, but I don't expect any lowering of the subsidy this year, especially since it's an election year. I expect the subsidy will be a more significant burden on the budget in two or three years' time, when mortgage banking starts to really grow," he said.

"If it wants to save money, the government should look at more expensive items such as subsidies for agriculture."

Although the IMF considers the mortgage loan interest subsidy high, the total funds earmarked for mortgage support this year is far below the Sk3.2 billion ($66.6 million) planned in state donations in 2002 for the most common method of construction financing in Slovakia - construction saving funds (stavebné sporenie).

The government gives Sk4,000 ($83) a year to each client who deposits more than Sk16,000 ($333) in a stavebné sporenie account. The state's strategy is that clients deposit a set monthly sum over a period of several years, and if they stick to the deposit plan, they become eligible for loans at 4.7 per cent interest to put towards their real estate plans.

However, mortgage banking is slowly becoming a more popular method of construction financing in Slovakia.

Mortgages are expected to see further growth this year with the decision of the largest retail bank, Slovenská sporiteľňa (SLSP), at the beginning of March to lower its mortgage interest rate from 10 per cent to 8.5 per cent, or 4 per cent after the state subsidy is discounted.

The new Law on Banks, which has been in force as of January this year, increased the biggest mortgage that can be taken from 60 per cent to 70 per cent of the value of the property sought.

"Conditions are very good and the rate is almost at the lowest possible level. We expect that the situation will boost people's interest in the product," Kaňa said.

Československá obchodná banka is expected to start offering mortgages in the second quarter of this year, while Investičná a rozvojová banka and Poľnobanka have both filed for licenses.