A COURT ruling in late March, followed by the mass resignation of the board of directors at engineering firm PPS Detva, has put 1,800 jobs at risk in one of Slovakia's highest unemployment regions.
The Supreme Court on March 27 challenged the legality of a 1997 move by the owners of engineering company Podpolianske strojárne (PPS) to transfer assets out of their heavily indebted firm to a new company, PPS Detva Holding.
The decision, which cast into doubt the existence of central Slovakia's PPS Detva Holding, sparked the resignation of PPS management, which was in turn followed by a union strike and what all involved described as chaos at the firm. 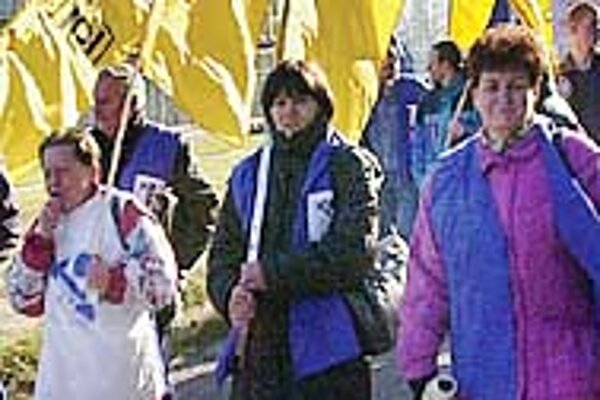 Font size:A-|A+  Comments disabled
A COURT ruling in late March, followed by the mass resignation of the board of directors at engineering firm PPS Detva, has put 1,800 jobs at risk in one of Slovakia's highest unemployment regions.

The Supreme Court on March 27 challenged the legality of a 1997 move by the owners of engineering company Podpolianske strojárne (PPS) to transfer assets out of their heavily indebted firm to a new company, PPS Detva Holding.

The decision, which cast into doubt the existence of central Slovakia's PPS Detva Holding, sparked the resignation of PPS management, which was in turn followed by a union strike and what all involved described as chaos at the firm.

PPS workers have not yet been paid even January wages, and with utility companies threatening to sell off PPS's assets to recover their debts, business analysts say the firm's chances of survival without outside help are slim.

The crisis at PSS, the largest employer in the Detva district, comes at a difficult time, with unemployment in the area over 20 per cent in February and few options left for out-of-work factory labourers.

"There is nothing else in Detva," said PPS Detva supervisory board member Vojtech Pánik. "PSS was a crowning achievement of the communist regime; now it's just a big problem."

PPS, like many firms in Slovakia's engineering sector, used to be an armaments manufacturer under communism, but following its privatisation in 1995, the new management attempted to turn it into a supplier of automotive parts.

Beset by financial problems, PPS Detva management decided in 1997 to solve debt problems by creating a daughter company - PPS Detva Holding - and transferring all assets to the new business. The company also raised its basic capital to Sk1.42 billion in 1998.

The relief offered by the solution, however, proved only temporary, as PPS Detva Holding in turn ran up millions of crowns in debt to utilities, insurance companies, banks and suppliers.

While PPS management has been tight-lipped about the volume of debt, PPS Detva's unions say they have been tracking the situation.

"By the end of the fiscal year 2001, liabilities in the company reached Sk700 million," said Terézia Ďuríková, a member of the regional branch of the union umbrella group OZ KOVO. "During the four years that PPS Detva Holding has existed, its cumulative losses have reached almost Sk1 billion."

Mired in debt problems, PPS Detva Holding has not paid wages to its employees for three months. Energy companies recently suspended supplies, and PPS workers had to work first without heat and later without electricity as well.

Under Slovak law, companies under bankruptcy protection may be kept running, with their futures decided by a bankruptcy trustee and a council of creditors.

The board of directors also demanded bankruptcy be called, and then abruptly resigned. "This created a problematic situation, because now there is no one to communicate with," said supervisory board member Pánik, who is also head of the processing industry section at the Economy Ministry.

With the legal existence of the firm in doubt, the management absent and employees at home awaiting word on their future, the government promised to investigate and discuss the situation at its next regular meeting on April 9.

Government spokesman Milan Maruška said that the cabinet had discussed the PPS situation at its regular session on April 2 and had tasked Economy Minister Ľubomír Harach with mapping out the problem.

Comes at a bad time

The apparent collapse of PPS threatens to ignite unemployment in the Detva district, which at nearly 21 percent is far below the Banská Bystrica region's February average of 26.14 per cent.

With PPS the only large-scale employer in Detva, however, the district labour office says that the plant's closure could push the local unemployment rate up to 35 per cent. "There are very few other employment possibilities in this district. The only other opportunity would be small and medium-sized enterprises, but there are very few such businesses," said Eleonóra Ostrihonová, head of the district labour office.

"The PPS situation could also trigger a chain reaction, with small enterprises losing their customers as spending in the district fell. I think only the bigger companies would survive in such a situation."

The labour office estimates that closure of the plant could also cost it Sk57 million in unemployment benefits.

Marek Jakoby of the Mesa 10 think tank said the government, which was recently warned by the International Monetary Fund not to increase social spending, and which faces elections in September, would now be under heavy pressure to save the company without increasing fiscal spending.

Nevertheless, he predicted the government would likely limit its help to finding a foreign investor to buy PPS assets and save the jobs of "a few hundred people".

This forecast was disputed by engineering sector analyst Vladimír Dohnal, of the Bratislava-based Symsite Research business intelligence group. Dohnal said that because the company could not be saved without direct help, the government would be forced to step in with a financial package.

"The company will otherwise probably be broken up and sold in parts, because the current situation is simply not sustainable," Dohnal said.

The Economy Ministry's Pánik argued the situation at PPS was not utterly hopeless, and had been caused by a shortage of cash.

"PPS co-operated with many foreign companies, and demand for its production was so high that it was not able to fill orders on time, simply because it could not afford to purchase the inputs," he said. "Negotiations with Všeobecná úverová banka (VÚB) were repeatedly unsuccessful, even though we had orders, capacities and reputation. VÚB was only concerned with physical collateral.

"Another problem was over-employment. The pressure from unions was not healthy, and this plant can efficiently employ 600, a maximum of 800 people - not 1,800. Under bankruptcy protection, with the ideal number of employees and a sufficient capital inflow, PPS could recuperate within 12 months."

Dohnal agreed that if a line of credit could be found, the company had a chance to survive. "In this region we have already had a few cases of engineering firms in similar situations. After they were bought by serious investors, the troubled plants were quickly revived. Take Hontianske strojárne as an example."

PPS's fate now depends on either a government bailout or the assignment of a bankruptcy trustee by the courts.

"Once the company gets a trustee we can start negotiations with potential buyers. My colleagues and I have already started a search. I have heard rumours that an Austrian company is considering stepping in," said Pánik.

OZ KOVO's Ďuríková, for her part, said the firm should focus on activities which had proven profitable in the past. "Business partners like Volvo and Caterpillar used to be very interested in co-operation with PPS, and I think they were even considering an acquisition," she said.

Dohnal said that while the future for PPS was dark, it was not without a glimmer of light. "The chance for the sector remains in its skilled labour force and the long engineering tradition in region. Even if investors decide not to buy existing plants like PPS, they will likely build new ones."