Small TV stations in a lather for new rating method

BIG television broadcasters are dragging their heels on a project to introduce more accurate viewership ratings. Smaller broadcasters, whose miniscule viewerships and thus ad revenues could rise sharply under a new 'people metre' system, say they are willing to push ahead by themselves.
The most popular station in the country, the privately-owned Markíza TV, regularly boasts a viewership according to the current 'diary' measurement method of over 75 per cent of Slovaks watching television at any one time. The public station Slovak Television (STV), the second most popular, claims between 30 and 40 per cent. 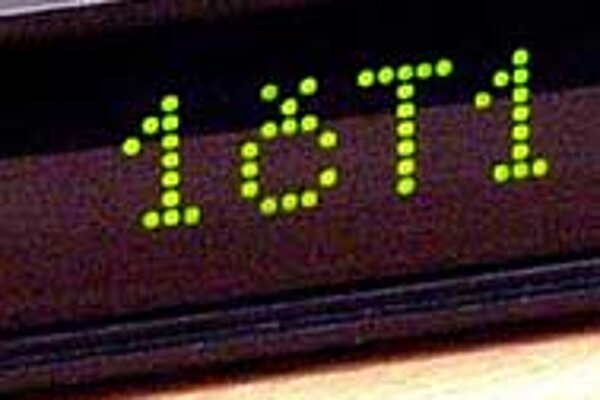 Font size:A-|A+  Comments disabled
BIG television broadcasters are dragging their heels on a project to introduce more accurate viewership ratings. Smaller broadcasters, whose miniscule viewerships and thus ad revenues could rise sharply under a new 'people metre' system, say they are willing to push ahead by themselves.

The most popular station in the country, the privately-owned Markíza TV, regularly boasts a viewership according to the current 'diary' measurement method of over 75 per cent of Slovaks watching television at any one time. The public station Slovak Television (STV), the second most popular, claims between 30 and 40 per cent.

Both Markíza and STV failed to appear at an April 3 meeting organised by a smaller station, the private Joj TV, to discuss the introduction of 'people meters' - electronic appliances connected to TV sets in selected households which every 30 seconds record what TV channel is being watched.

Introduction of the people metres, which Markíza and STV have been discussing for almost two years with no outcome, would generate more accurate viewership figures thus giving advertising firms a better idea of where to put their clients' advertising money.

But because the 'more accurate' ratings would likely mean a loss in market share for the bigger stations and important gains for smaller fish, the people metre system is being boycotted by the main players, argue media observers

After the failure of Markíza and STV to show up on April 3, Joj TV Director Richard Rybníček accused the larger stations of "boycotting people metres, the most objective tool for measuring a TV's viewership rates".

In response, Markíza organised a separate meeting with ad agencies on April 9, at which it produced an itinerary for the introduction of people metres and a proposal for a representative body of all Slovak broadcasters that would choose a private firm to set up and run the people metres programme.

"We think small broadcasters should join bigger broadcasters to work on the people metres project. We're not avoiding people metres, and as you may know we've been working on the project for longer than Joj TV," said Jozef Gogola of Markíza's PR department.

Rybníček, meanwhile, said that his TV station and TA3 expected Markíza and STV to "make suggestions on our plan", rather than the other way around.

Accurate measurements of viewerships did not become a really hot topic until the arrival of television stations offering competition to the incumbents. TA3, which launched in September 2001, and Joj in March this year have since made revamping the outdated 'diary' measurement system a priority.

Czech media entrepreneur Vladimír Železný, who owns Joj, said the diary system was both inaccurate and invariably biased. Families participating in viewership surveys were asked to keep a record of the stations they watched at 15 minute intervals throughout every day, but invariably forgot to mark down every channel change, and often ended up just jotting down the major programmes that had stayed in their memories.

"The diary system serves the biggest TV stations best," he said. "When a family sits down to do their entries in the diary, thinking what programmes they watched over the last week, they remember the biggest TV programmes but don't record in their diaries that they switched to other TV stations several times."

Rybníček dubbed the diary system a relic of the "media middle-ages".

It's no surprise that the diary system is unpopular with the new stations. The first diary-based surveys including Joj TV and TA3 gave the former 7.23 per cent viewership and the latter 0.75 per cent.

Martin Lengyel, the director of TA3, said the results did not match reality, and said "we'll just wait for the people metres".

Media observers noted that when people meters were introduced in other countries, major TV stations had lost between 5 to 10 per cent of the viewership rates they had been getting from diary systems.

"That doesn't necessarily mean that a TV station will lose the same share of its ad contracts, but it will certainly have an impact on the ad companies when they decide how to distribute their ad money to media," said Peter Kováč, head of the country's broadcast authority, the Council for Broadcasting and Retransmission.

"It's definitely worth it for small TVs to fight for the system, and it's in the interest of big stations to try and slow down the process," Kováč added.

For financially strapped operations like Lengyel's TA3, more accurate records of channel surfing could give his station a greater share of the advertising pie than it currently receives.

The Slovak business weekly Trend estimated Markíza's ad revenues last year at Sk1.68 billion of the total Sk4 billion spent by ad agencies in all Slovak media, including radio and print. Markíza took about 85 per cent of the ad money going to TV media.

"Once we have the people metre system, I'm convinced that the media and ad agencies will take into account the results of the new system rather than the old one for their ad distribution," said Martin Šmatlák, executive director of the Club of Slovak Advertising Agencies (Kras).

The small TV stations, evidently frustrated by the lack of support from their larger competitors, say they are determined to go ahead with their project to introduce people metres by January 2003.

"We won't write letters to each other forever, like it's normally done here in Slovakia, and endlessly discuss what is better and what's not," said Rybníček.