Taking it to the streets

PRACTICED hands assemble hypodermic syringes, alcohol swabs and condoms into kits for street workers. In a few minutes, members of Odyseus, a Bratislava-based non governmental organisation (NGO), will be back on the job among the capital's drug users and prostitutes.
Barbora Uhereková, one of 11 women on the staff of Odyseus, sets off on this chilly spring Sunday for a housing complex called 'the Pentagon' - a huge derelict concrete housing block with few green spaces in the Bratislava suburb of Dolné Hony.
The Pentagon is the first of several places in the capital Uhereková will visit, bringing her mobile 'office' to at-risk people. Most of Bratislava's 3,000 officially registered heroin addicts and 1,000 prostitutes come from suburban housing complexes. 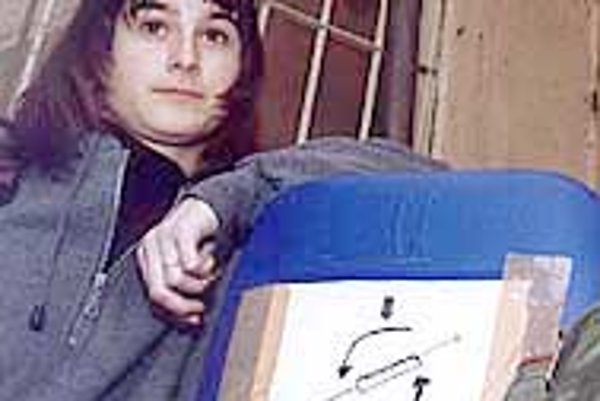 Font size:A-|A+  Comments disabled
PRACTICED hands assemble hypodermic syringes, alcohol swabs and condoms into kits for street workers. In a few minutes, members of Odyseus, a Bratislava-based non governmental organisation (NGO), will be back on the job among the capital's drug users and prostitutes.

Barbora Uhereková, one of 11 women on the staff of Odyseus, sets off on this chilly spring Sunday for a housing complex called 'the Pentagon' - a huge derelict concrete housing block with few green spaces in the Bratislava suburb of Dolné Hony.

The Pentagon is the first of several places in the capital Uhereková will visit, bringing her mobile 'office' to at-risk people. Most of Bratislava's 3,000 officially registered heroin addicts and 1,000 prostitutes come from suburban housing complexes.

Stray dogs wander past listless children and adults, many of whom lean against graffiti-covered walls. Uhereková describes her feelings about the neighbourhood in an undertone.

"It's like a world unto itself, with rules of its own. Some kids will never get out of here," she says.

Uhereková walks her street beat four to six times a month. She gives sterile syringes to drug addicts in exchange for used ones, supplies prostitutes with free condoms, and sometimes even explains how to use them.

She smiles patiently as a 12-year-old girl blows smoke into her face. Uhereková had been explaining to the girl that smoking and drinking is bad for her health.

The NGO was founded in 1998 by Katarína Jirešová, 27, who says she had always dreamed of starting a street work group in Bratislava, and had been inspired by a seminar organised by the Open Society Foundation to found Odyseus.

The majority of Odyseus' 13 staff are volunteers trained by Jirešová. They educate their 'clients' about disease, give vaccinations against hepatitis, test for HIV, and offer social assistance to their troubled street acquaintances.

Drug users and prostitutes are registered under numbers rather than names to guarantee them anonymity. Neither identification nor insurance cards are required, meaning that people who would probably never go to state institutions are thus registered and make official statistics more accurate.

Like Uhereková, Odyseus street workers move around the city to pre-arranged sites where they meet about ten people an hour. Jirešová says that once street people have stopped by and received help, there is a big chance they will come back as the anonymity of the contact saves them the embarrassment and condemnation they feel with state health services.

Although street work had become common throughout Europe by 1998, Jirešová says not much has changed in the attitudes of Slovak governments to drugs since 1989. "Our society and state officials only partially admit there is a problem," she says.

"In the Czech Republic the government orders harm reduction programmes from NGOs. They have come to realise it's much cheaper, and that high-quality service is guaranteed."

Uhereková explains that the Slovak state apparatus is still aiming for abstinence, rather than falling in line with the modern trend towards containment, and in any case is not spending enough money to achieve either goal.

NGOs in the field say that prevention and 'harm reduction' programmes should be part of a coordinated approach to addiction. According to Táňa Hičárová-Rajniaková, who is responsible for Slovakia's harm reduction project grants from the Open Society Foundation in Bratislava, street work is "one rib in a complex fan of services.

"It's not supposed to be a substitute for programmes where abstinence is the primary goal. Instead, it's another alternative for addicted people, who for whatever reason are not able to quit at the moment. Repression never solved anything here, and it's a pity the state is giving these effective programmes only moral support," Hičárová-Rajniaková said.

For Odyseus street workers, more support would mean they could provide better services to their street contacts, such as Tomáš, 26, a heroin addict.

Tomáš, who is among the estimated 40 percent of all heroin addicts contacted by street workers in Bratislava, smiles when asked whether he knows Odyseus staff.

"I'm just lucky I'm not HIV positive. My best friend died of it [AIDS] last year. I've been using only clean needles since then," he says in a monotone.

If Uhereková had more money, she says, she would use it to build a contact centre, called a 'K-centre' by street workers. This is a "place where they [street people] can get a coffee, see a doctor, take a shower," Uhereková says.

While Slovakia does not have a single K-centre, the neighbouring Czech Republic has 48, with the first being opened as far back as 1991.

According to Hičarová-Rajniaková, "problems only accumulate without a K-centre. You can't create a drug-free society by ignoring and alienating drug users. Cities still don't understand that their priority should be to support such projects. K-centres are simply a necessity."

Bratislana Old Town spokesman Milan Vajda said that at the last sitting of the social and health commission of Old Town City Hall, the members had decided to offer space for the K-centre demanded by both street work organisations in Bratislava, Odyseus and Prima.

The space provided, Vajda said, would be the former public toilets on August 29 Street; even such modest quarters, he added, would likely draw the ire of locals who resented having addicts in their midst.

"Even though I don't necessarily think it's the responsibility of the city to assign buildings for street work activities, we did it, and now we'll definitely face a negative reaction from local inhabitants," said Vajda.

Meanwhile, Uhereková wraps up her condom and needle kit and gets ready to meet heroin addicts and young prostitutes at Šafárikovo and Hodžovo squares closer to Bratislava's Old Town district. From there she will head to the main train station.

She says that for now, she and her colleagues represent a mobile human 'contact centre' at which volunteers try to convince the outcast that "their lives can be and are worth fixing".