HOSPITALS have backed away from confrontation with Slovakia's largest health insurer, Všeobecná Zdravotná Poisťovňa (VšZP), and after a fortnight of protest have signed tough new contracts they say do not leave them with enough money to cover operating costs.
The contracts, which VšZP introduced on April 1, capped payments for insured health services and drugs at Slovak hospitals at Sk14 billion for 2002, the same amount as in 2001. The country's 128 hospitals had asked the new contracts at least raise funding to keep pace with inflation in 2001.
VšZP also suggested that hospitals reduce the number of beds by 14 per cent. 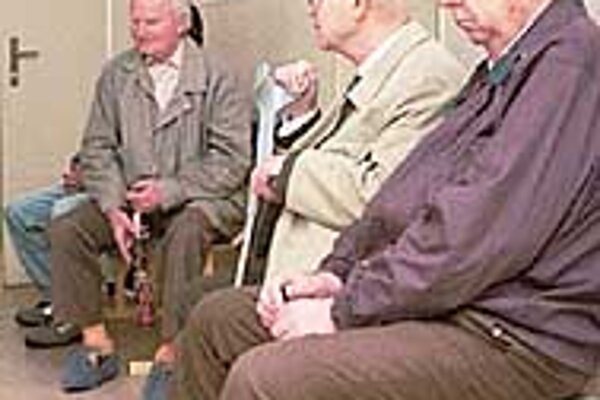 Font size:A-|A+  Comments disabled
HOSPITALS have backed away from confrontation with Slovakia's largest health insurer, Všeobecná Zdravotná Poisťovňa (VšZP), and after a fortnight of protest have signed tough new contracts they say do not leave them with enough money to cover operating costs.

The contracts, which VšZP introduced on April 1, capped payments for insured health services and drugs at Slovak hospitals at Sk14 billion for 2002, the same amount as in 2001. The country's 128 hospitals had asked the new contracts at least raise funding to keep pace with inflation in 2001.

VšZP also suggested that hospitals reduce the number of beds by 14 per cent.

The Health Ministry said the regime was meant to cap the sector's spiralling debt by forcing hospitals to close wings and departments that were running at a heavy loss.

But Rudolf Zajac, a health sector analyst and a member of the non-parliamentary New Citizen's Alliance (Ano) party, said the payment changes had only caused greater chaos in the sector. Estimating the sector's debt at Sk21 billion, Zajac said that only fundamental alterations in the way health care is provided could eliminate debt and improve services.

"We need basic and fundamental change, not just a change in price policy," said Zajac. "As long as we want to finance complete health care from public money, as long as we have over-capacity and don't know which hospitals we want to eliminate, as long as we refuse to introduce the competition and performance rewards that are common in Europe, then any change in price structure just increases chaos, and patients become more and more exploitable."

The new price regime introduced by the ministry had said that payments for health services would be calculated according to category, in other words whether they involved outpatient departments at private clinics, prescribed drugs at private pharmacies, or in-patient services at state hospitals.

Of Slovakia's five health insurers, only VšZP - which insures 70 per cent of Slovaks - insisted that new contracts be signed immediately with hospitals, and that the maximum amount hospitals would get would be the average they received per month in 2001.

Peter Ottinger, president of the Slovak Association of Hospitals (ANS), said the VšZP contracts gave the insurer the upper hand in bilateral relations with hospitals, stating that if the health care provider rejected the conditions and price offered by the insurer, the contract was void.

"If VšZP wants to eliminate a hospital or reduce its functions, all it has to do is offer an unacceptable price for services," said Ottinger. "If the hospital director accepts the price he signs the hospital's death warrant, and if not the hospital is out of the payment network. It's no different from blackmail."

With the ANS recommending that hospitals not sign with VšZP, many entered April without insurance contracts covering three-quarters of their patients. Some facilities sent all non-acute patients insured by VšZP home, while others continued to treat them and prescribe medicine without the security of a contract.

The chaos and legal uncertainty caused some VšZP policy holders to switch to other insurers from fear of being turned away from hospitals. Although VšZP spokesperson Jana Millerová said that "the level of departures is not dramatic," medical industry unions in a joint declaration called the situation the most serious the Slovak health sector had faced since 1989.

But following a meeting of the VšZP board on April 8, Health Minister Roman Kováč appealed to the remaining hospitals to sign at least three-month trial contracts with the insurer to ease the stand-off. By the end of that week, only two had not.

"The Dôvera insurance house offered us a little less than last year, but I can afford not to sign that deal because they are not a major partner for us," said Ján Paškan, director of the Cyrila a Metoda hospital in the Bratislava suburb of Petržalka. "But I can't afford not to sign with VšZP."

"In the end what happened was that the patients were exploited, because some hospitals which didn't have contracts began offering VšZP patients only acute care, and kicked people out of their beds," said Zajac.

Zajac said that in looking for places to save money in the debt-heavy health care sector, the Health Ministry had feared to anger private pharmacies and doctors, who had threatened to make people pay for drugs and services if payments were cut. Hospitals, he said, were an easier target.

"But while it is true we have an excess of beds and hospitals, the change expected hospitals to reach the figure of five acute care beds per 1,000 citizens, which couldn't have worked because the changes didn't reduce hospitals' extremely high fixed costs," said Zajac.

He estimated that hospitals spent 90 per cent of their income on salaries, heating and hospital operating costs, leaving only 10 per cent to buy drugs and special medical equipment.

"The new price system was supposed to force hospitals to close ineffective departments. It's as if hospitals were trains and their departments wagons. If you have empty trains with big operating costs, you gain almost nothing by shutting wagons and still keeping on all the employees.

"It would be far better to start a network of outpatient services and allow doctors to go and work there, which would reduce fixed costs and increase access for patients. But it will be a great art to change this socialist system into a system that serves the public."