NITRA - THE RE-ELECTION of Vladimír Mečiar to the head of the opposition Movement for a Democratic Slovakia (HZDS) on April 20 was evidence the authoritarian ex-prime minister still dominates the party, and showed how little the HZDS had changed course since losing elections in 1998, said political analysts.
Mečiar, who told his party congress the HZDS was stronger than before and ready to lead Slovakia after September 2002 general elections, was confirmed in his post with the votes of all 252 delegates save one abstention - his own. 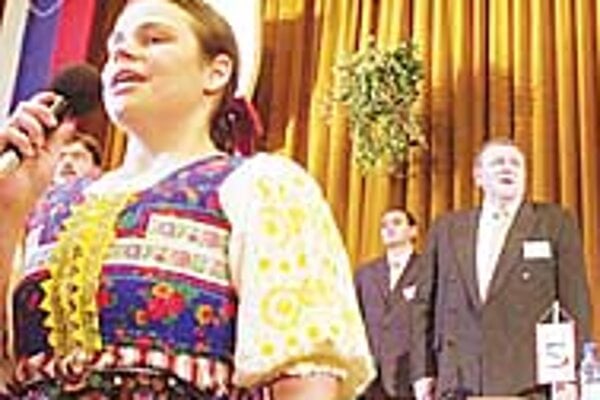 Font size:A-|A+  Comments disabled
NITRA - THE RE-ELECTION of Vladimír Mečiar to the head of the opposition Movement for a Democratic Slovakia (HZDS) on April 20 was evidence the authoritarian ex-prime minister still dominates the party, and showed how little the HZDS had changed course since losing elections in 1998, said political analysts.

Mečiar, who told his party congress the HZDS was stronger than before and ready to lead Slovakia after September 2002 general elections, was confirmed in his post with the votes of all 252 delegates save one abstention - his own.

The HZDS, which has regularly scored just under 30 per cent voter support in political polls since 1998, is blamed for taking the country into international isolation and off the integration track under Mečiar's last term at the helm from 1994-1998.

Since early 2000, however, the HZDS has made Nato and EU entry an explicit party goal. Mečiar told HZDS delegates last weekend that the party's participation in the next cabinet was the main guarantee of success for Slovakia's integration efforts, harvesting a round of applause.

"We are a victorious party. It's time to win, to defeat not only incompetence but also human stupidity in general," said Mečiar in his opening speech, in an indirect reference to the current Dzurinda government, which the HZDS has steadily criticised.

"To all who wanted to see us gone, who persecuted us, we say: we are here, gentlemen, we are stronger and there are more of us," the HZDS leader added.

The congress also elected six party vice-chairs whose names indicated that "nothing has changed inside the HZDS," said Soňa Szomolányi, head of the political science department at Bratislava's Comenius University.

Rudolf Žiak, former head of counter-espionage at the Slovak secret service (SIS), was re-elected vice-chair for foreign affairs. Žiak's role in planning secret service missions to destabilise central Europe and derail Nato expansion in the region was documented in a 1999 report on the SIS by its incoming chief, Vladimír Mitro.

Sergej Kozlík kept his vice-chair for economy, a position he first won in 1994. Kozlík served as Finance Minister and deputy PM under the previous HZDS-led government.

Kovarčík, who analysts said faced a difficult task in improving his party's image in media, told The Slovak Spectator of his plans.

"First I have to thoroughly check what I'm taking over, and then I'll create a commission of experts, of which the HZDS has many, in order to create a system for developing our media strategy."

Vojtech Tkáč, regarded as standing out from the list of hard core Mečiar supporters in vice-chair positions, was elected to the post for social issues. Ján Jasovský became the party's economist, and Nová Dubnica Mayor Eva Antošová central secretary.

In response to claims that the unreformed HZDS has few potential coalition partners, Mečiar suggested that his party's "12-year battle" with the ruling coalition Christian Democrats (KDH) was coming to an end, enabling the two parties to form a future cabinet with the non-parliamentary Smer party of Robert Fico and the New Citizen's Alliance (Ano) headed by media owner Pavol Rusko.

However, KDH leader Pavel Hrušovský replied that "the HZDS is not among the parties" that the Christian Democrats would form a cabinet with, while Fico repeated his earlier statement that "Mečiar is the barrier" to his co-operation with the HZDS.

"He [Mečiar] knows that very well, and I won't move a centimetre from my position," Fico said.

Nor were Mečiar's claims to be no threat to Slovakia's Nato ambitions borne out by Alliance diplomats.

Following Mečiar's declaration that "the HZDS expects a direct invitation to join the Alliance in the autumn," US ambassador to Slovakia Ronald Weiser said on April 22 that his country's negative stance toward Mečiar had not changed.

"A return of a government that does not call for democratic values would raise US concerns," he said.

Western diplomats, including the US and Nato representatives, have warned Slovakia not to elect leaders who, like Mečiar, have a reputation for not respecting the basic democratic values of the western community. The HZDS is among other things blamed for thwarting a referendum on Nato entry in 1997.

Mečiar, however, maintains that such statements are "sporadic opinions" and insists that his party will prove itself trustworthy if given responsibility for running the state.

"In November, shortly after elections in Slovakia, Nato members are scheduled to name its new members at a summit in the Czech capital, Prague. Nato officials have warned Slovakia that returning Mečiar to power would again damage its chances of joining the alliance."

"Other problems ahead are: the 'Cyprus question', or the historic territorial confrontation between Greece, an EU member, and Turkey an EU wannabe; the likely general opposition to Slovakia if the Marxist/ultra-nationalist Vladimír Mečiar regains power in the elections next autumn; and Austrian complaints against the Czech Republic for the proximity of the Temelín nuclear plant."

"In the run-up to the Prague summit, blunt messages abound. During a recent tour of the candidate countries, the US ambassador to NATO made it clear that Slovakia would be left out in the cold if the country's former Prime Minister - the radical nationalist Vladimír Mečiar - is returned to power in September's general elections. Internationally isolated under Mr Mečiar's rule, Slovakia missed its first chance to join Nato in 1997."

"Bush officials stress that no final decision on American preferences is likely until late September because of the election planned for Slovakia, where Vladimír Mečiar, a strong nationalist, could return to power, once again undermining its chances of joining Nato."