Peter Šarišský shares a forlorn brick house with ten other families on the outskirts of the eastern Slovak village of Letanovce. For five years, he has lived with his wife and four children in a tiny basement room without running water, toilets, central heating or telephone. For the last month, the electricity in the basement has been switched off. "What the hell, are we animals, that we should have to live like this?" he asked.
Letanovce's squalid Romany settlement lies within a stone's throw of the protected area Slovenský Raj (Slovak Paradise). The heavy irony is not lost on Slovakia's Romany activists, who say that Gypsies, as Romanies have long been called in Europe, have never been accepted as equals by the country's white majority. 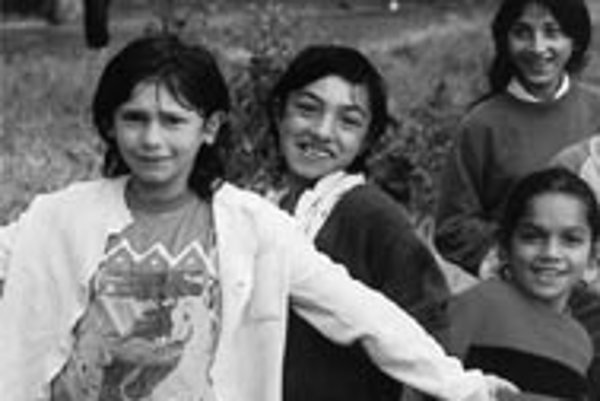 Font size:A-|A+0
Peter Šarišský shares a forlorn brick house with ten other families on the outskirts of the eastern Slovak village of Letanovce. For five years, he has lived with his wife and four children in a tiny basement room without running water, toilets, central heating or telephone. For the last month, the electricity in the basement has been switched off. "What the hell, are we animals, that we should have to live like this?" he asked.

Letanovce's squalid Romany settlement lies within a stone's throw of the protected area Slovenský Raj (Slovak Paradise). The heavy irony is not lost on Slovakia's Romany activists, who say that Gypsies, as Romanies have long been called in Europe, have never been accepted as equals by the country's white majority.

In fact, Romany representatives say that they have recently lost even the marginal rights they enjoyed under the previous communist government. Denied work and decent housing, Slovakia's Romanies are now increasingly subject to racially-motivated harassment and violence from many sectors of white society.

Fear is a daily fact of life for most Romany communities. "Those damn skinheads, sometimes they have parties around here, where they get drunk and then just cruise around looking for Gypsies to beat," said Šarišský's father Tibor. "If there were more of us, we could protect ourselves, but we are not an army."

Racial violence, by all accounts, has risen sharply in Slovakia over the past several years. The country's first racially-motivated murder occurred in the central Slovak town of Žiar nad Hronom in July 1995. A gang of skinheads beat Mário Goral, a 17 year-old Romany, doused him with gasoline and set him on fire.

According to the Slovak Helsinki Committee, murders and beatings of Romanies in Slovakia have never been systematically catalogued; current statistics on violence against Romanies are simply culled from newspapers. But the trend towards higher levels of violence is clear - in 1996, for example, 13 attacks, resulting in 3 dead and 11 seriously wounded Romanies, were reported in the Slovak media. Figures for 1997 are expected to show a continued rise according to most civil rights groups in the country.

According to Marek Baláž, a Romany businessman and Chairman of the Romany Self-help Initiative, skinhead violence only masks a far more profound social problem. "85 percent of the people in this country are racist," he said. "It's become a bit fashionable now to be at least somewhat racist and nationalist. But we are entering an age when the word "Gypsy" no longer means a real person - just like what happened with the word 'nigger' in America."

Even if Slovakia's Romanies did not live in fear of racial violence, there is little about their daily existence to give them cause for celebration. Karol Horváth, Vice President of the Romany People's Initiative (ROI) in Košice, said that in his city "about 70 to 80 percent of Romanies are unemployed," but that in Košice township, "the number is more like 90 percent."

"Slovaks believe that all Gypsies don't want to work, but that's just not true," insisted Horváth. "The real problem is that when I call about a job, a company might say 'sure, we have work', but when I actually walk in the door for an interview, they look at each other and tell me the position has been filled. They simply refuse to hire. And work is the most important thing for anyone."

Branislav Baláž, the Government's Authorized Representative for Solving Problems of Citizens in Need of Special Care, agreed that Romanies face significant discrimination from employers. "This kind of thing is happening all over Europe," he said. "Private businesses anywhere, when they don't like the color of someone's face, may refuse them work, and I would say yes, Romanies here face the same kind of thing."

Šarišský laughed when asked about work. "I'm not white, so no one will give me work," he said. "They will just call me a lazy Gypsy thief and tell me to go away. Maybe if I lived in a bigger city like Poprad or Prešov, I might have a chance, but not here." Nevertheless, Šarišský added, his life was far from idle. "Everybody who lives in this house has plenty to do just looking for wood to stay warm, and carrying water up from the stream located at the cattle farm below," he said.

Denied work, most Romanies have little chance of improving their living conditions. "Basic support from the state comes to 1,470 Sk," Šarišský said. "Only my wife gets money, because I was living in the Czech lands when the country broke up [in 1993]. What the hell are we supposed to buy with 1,470 Sk? A pair of shoes maybe?"

With so little income, Šarišský said, he cannot even mend the roof of his tumbledown house, let alone looking for better accommodation. "We built this house with our own hands five years ago. The roof is now totally gone - when it rains we get wet, when it snows we are cold. But I don't have money to fix it, no one does, and the state will not help us."

Some state aid to help Romany families find better housing or obtain legal counsel does trickle down to municipal level in Slovakia, but many Romanies charge that the money is pocketed by corrupt local officials. "ROI protests one thing in particular," said Horváth, "and that is these municipal boards that get big funding from the government for Romany programs. Financial decisions are made by these Gadžo (white people in Romany), while only one or two Romanies participate."

It is good that state funding exists," said Horváth, "but too often budget decisions are made by amateurs, or even crooks who just take the money and divide it among themselves." Šarišský, for his part, said that "the town was supposed to hook us up to the gas, water and sewage lines five years ago, but the mayor just stole the money, bought himself a new car and drove around laughing at us."

Contacted at his office, Michal Urban, the mayor of Letanovce, was dismissive. "The entire town is without running water and gas, not just the Gypsies," he said. "And as far as state funds, no-one here has received a crown, not for any purpose." Ján Nemčík, a village resident, confirmed that most white residents draw their water from a well, but agreed that the village's Romany people "live in appalling conditions."

Slovakia's Romanies don't believe that their situation is about to change soon. "The ones who really have a chance for a different life are the kids," said Baláž, "but when they arrive to school covered in mud because there is no paved road where they live, when they have no water to wash with at home, no light to do their homework by, no heat while they sleep, not enough to eat - these things are real disadvantages at school." Šarišský agreed. "When our children come to school muddy and tired, they accuse us of neglecting them," he said. "But it's an impossible situation - they won't let us live anywhere else, and they won't help us improve our lives here."