International Court of Justice rules that Slovakia, Hungary must abide by the 1977 treaty and negotiate the completion of the hydroelectric project on the Danube River.
The two-decade-long saga of the Gabčíkovo-Nagymaros waterworks had its closing chapter on September 25 when the International Court of Justice in The Hague ruled that Hungary was not entitled to suspend and subsequently abandon its building of a hydroelectric plant on its side of the border.
By saying that the September 16, 1977 treaty that established the project remains in force, the Court vindicated the heart of Slovakia's argument, which was that its southern neighbor broke an existing agreement to cooperate on the project, said Peter Tomka, Slovakia's chief legal counsel before the Court. 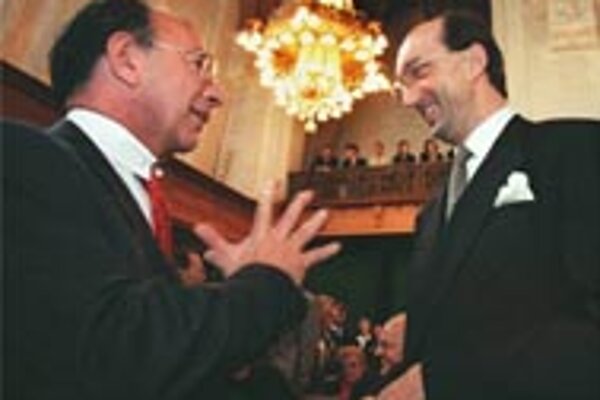 Font size:A-|A+0
International Court of Justice rules that Slovakia, Hungary must abide by the 1977 treaty and negotiate the completion of the hydroelectric project on the Danube River.

The two-decade-long saga of the Gabčíkovo-Nagymaros waterworks had its closing chapter on September 25 when the International Court of Justice in The Hague ruled that Hungary was not entitled to suspend and subsequently abandon its building of a hydroelectric plant on its side of the border.

By saying that the September 16, 1977 treaty that established the project remains in force, the Court vindicated the heart of Slovakia's argument, which was that its southern neighbor broke an existing agreement to cooperate on the project, said Peter Tomka, Slovakia's chief legal counsel before the Court.

It also marked a decisive legal victory for the Slovak side, he added. "If we had managed to convince three more judges [in one of the Court's votes], we would have been absolute victors," Tomka said at a press conference after the decision was announced.

Although confirming the treaty's validity, the judges left it up to both countries to negotiate bona fide, i.e. in good faith, to resolve all issues pertaining to it. The two sides will have six months to implement the Court's recommendations. If they fail to reach consensus, the matter may appear before the Court again.

The 1977 accord encompassed a joint scheme to utilize the Danube, Europe's longest river, to generate electricity. The deal provided for twin dams, one to be built at Gabčíkovo and the other to be constructed near the town of Nagymaros in Hungary.

But Budapest suspended works on its dam in 1989 under pressure from environmental groups and pulled out of the project altogether in May 1992, after the Hungarian Parliament bound the cabinet to negotiate on nothing else but abolishing the treaty.

However, Czechoslovakia went ahead with its end of the project at Gabčíkovo, damming the Danube on its territory near the village of Čuňovo and redirecting its waters to fuel the already built power plant.

Although upbraiding Slovakia for its peremptory action in unilaterally diverting the Danube River in October 1992, the Court nodded a clear "yes" to all of Slovakia's arguments and turned down the Hungarian ones, saying they were rooted in disrespecting the 1977 treaty.

However, the Court issued a muddled ruling on then-Czechoslovakia's decision to go ahead and build Gabčíkovo, the so-called Variant C, which diverted the Danube northward.

First, the Court decided "nine votes to six that Czechoslovakia was entitled to proceed, in November 1991, to the 'provisional solution'," a euphemism for the country's diverting the river. But in the following observation, the Court decided "ten votes to five that Czechoslovakia was not entitled to put into operation, from October 1992, this 'provisional solution'."

Many legal observers interpreted the seemingly contradictory votes as a "Solomon's" verdict, meaning it left neither side going away empty-handed.

The four judges who OK'd the solution but KO'd its implementation, were the Court's vice-president Weeramantry, and judges Guillaume, Shi and Kooijmans.

"The Court observes...that given the fact that there have been intersecting wrongs by both Parties, the issue of compensation could satisfactorily be resolved in the framework of an overall settlement if each of the Parties were to renounce or cancel all financial claims and counter-claims," the judgement summary reads.

And thirdly, it was the first case ever in which the judges went on-location to gather information on the disputed issue, instead of relying solely on sketches and plans. Last April, the justices visited both parts of the abortive joint venture. At a press conference held after the verdict was announced, Tomka said the visit played a major role in convincing the Court of the Gabčíkovo dam's universal importance.

When asked to assess whether the dam's role in safeguarding Hungary against the floods that hit the region last July played a part in the verdict, Tomka said: "It was not as much the summer floods that influenced [the justices'] decision. More important was their visit during which they had a chance to see the dam's importance not only as an energy producer but also to evaluate its environmental impact and its role in flood protection."

Before the verdict was made public, Hungary was at pains to sound a conciliatory tone. "Whatever the decision of the court, Hungary is very ready to start expert talks with Slovakia to find a solution in accordance with the court's decision," said Hungarian Foreign Ministry spokesman Gábor Horváth.

After the verdict, Hungarian Prime Minister Gyula Horn made a significant step forward, announcing that he had held talks with all parties represented in the Hungarian Parliament and stating that all of them agreed to abolish the May 1992 resolution that made Hungary quit the scheme.

The only ones who stayed adamant on the dam were environmentalists, who claim the Danube's new course destroyed a large swath of Slovak wetlands, left Hungary's wetlands parched and turned the original riverbed into a stagnant and polluted reservoir.

"In reality, there are no winners in this case, but the losers are the local inhabitants and the unique nature of the Danube's inland delta," the common statement of 11 Slovak environmentalist groups reads. "Slovak NGOs [non-governmental organizations] have no reason to change their principal position towards Gabčíkovo. The construction of Variant C destroyed more than 40 square kilometers of floodplain forests and present operations are causing a further degradation of the branch system's ecosystems."