The twin referenda on NATO accession and the direct presidential election may have seemed to most Slovaks like a play in which they were merely viewers.
One thing is for sure, though. Viewers of this government-orchestrated performance knew all along who wrote the script and directed the play, although the maestro in question did everything he could to stay out of sight during rehearsals and the show itself.
On February 14, the coalition's majority led by Prime Minister Vladimír Mečiar's Movement for a Democratic Slovakia (HZDS) bound President Michal Kováč to call a referendum on NATO accession.
It was in line with what Mečiar promised a crowd of his supporters one week before the vote. "You tell us what to do, and we'll do it," he said, adding that now the electorate will decide whether the country should join the alliance. 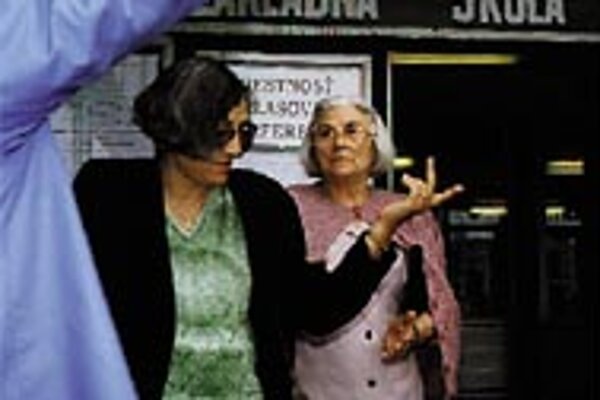 Font size:A-|A+0
The twin referenda on NATO accession and the direct presidential election may have seemed to most Slovaks like a play in which they were merely viewers.

One thing is for sure, though. Viewers of this government-orchestrated performance knew all along who wrote the script and directed the play, although the maestro in question did everything he could to stay out of sight during rehearsals and the show itself.

It was in line with what Mečiar promised a crowd of his supporters one week before the vote. "You tell us what to do, and we'll do it," he said, adding that now the electorate will decide whether the country should join the alliance.

"This referendum has only one goal: to show the world that Slovakia wants to be in NATO," Dušan Slobodník of the HZDS told the assembly before the vote.

Despite opposition deputies' claims that the latter two questions were irrelevant as the alliance had said that neither accepting the deployment of nuclear weapons nor military bases were conditions for joining, the coalition passed the matter to Kováč.

On March 13, Kováč called the NATO referendum for May 23-24, tying it with another public vote on the direct presidential election which he was bound to call after 495,241 citizens signed a petition requesting it, far more than the 350,000 needed to hold a referendum.

On April 22, more than a month after Kováč had called for the double vote, Mečiar's cabinet ordered Interior Minister Gustáv Krajči not to distribute ballots with all four questions, and asked the Constitutional Court to decide whether the Constitution can be amended by a referendum. On May 14, the court announced it could not rule on the motion, saying that the cabinet was not the appropriate body to file such a request. Two days later, the referendum's highest executive body, the multi-partisan Central Referendum Committee (ÚKR), approved a single ballot with all four questions on it and bound Krajči to distribute it.

But Krajči ordered state administrators on the county level - all nominated by the ruling coalition parties - not to proceed with ballot distribution to towns, boroughs and precincts until the court rules on a request made by a group of coalition deputies asking the court the same question as the cabinet's one and filed right after the court turned down the cabinet's request [NEED DATE HERE].

On May 20, Krajči asked Kováč to postpone the referendum. Kováč turned it down on the grounds that there are no technical complications that stood in the way of a smooth carrying out of the public vote. "Since the ballots with all four questions are printed out and partly distributed, I don't see any reason not to complete their distribution," Kováč said.

"Therefore I'm asking you to ensure that the ballot distribution be fully carried out in accordance with the law on organizing a referendum," Kováč wrote Krajči.

But Krajči announced that he still felt bound more by the cabinet's resolution than by the ÚKR's. Proponents of the four-question ballot awaited the court's ruling on the coalition deputies' motion, hoping that it would force Krajči to finish distributing them.

In a somewhat hazy ruling, though, the court adjudicated on May 21 that it was possible to amend the Constitution by a referendum, but in a related ruling it claimed that part of Kováč's decision to place the fourth question on the ballot was unlawful.

Namely, at Kováč's request, the ÚKR - which is composed of 8 opposition members and 7 coalition supporters - decided that a draft version of the constitutional law on the direct presidential election be printed on the rear side of the ballot. According to the court that was unlawful, because the 'Yes' answer to the fourth question might implicate that the electorate approved the drafted bill.

Marianna Mochnáčová, the head of Court Chairman Milan Čič's office, explained that the drafted bill is not "legally binding." Therefore, even if the electorate voted 'Yes' to the fourth question, the law could not be put on the books.

However, the court didn't rule that the fourth question in itself was unconstitutional, meaning that it gave the green light for the four-question ballots. "The Constitution doesn't contain a clause banning a constitutional amendment being subject to a referendum," the court ruled.

Not seeing the forest because of a tree, though, Krajči interpreted the court's ruling as meaning that the fourth question should not be on the ballot. "The court's ruling confirmed that the ballot's enclosure is unlawful, therefore the fourth question... shouldn't be on the ballot," he said. "I'm taking on the responsibility for changing the ballot. I've ordered to print ballots with three questions, so that a citizen is not confused by question number 4."

So two days before the announced referendum, Krajči ordered that a new set of ballots with only three questions on NATO entry be printed and distributed to polling stations throughout Slovakia. The rest is history.

Although seemed that the main conflict was raging between Kováč and Krajči, Mečiar never stopped looking over Krajči's shoulder. [HOW DO WE KNOW THIS? NEED ATTRIBUTION]

Considering Mečiar's repeated statements that one of his party's and cabinet's foremost foreign policy goals was NATO membership, it is curious that the premier never spoke out on the matter himself. When the official ten-day media campaign started on May 12, the HZDS and the Slovak National Party (SNS) were the only ones that hadn't submitted their campaign spots to Slovak TV. While the ultra-right SNS said they delayed their spots because they thought the campaign intro swayed the viewer to respond positively by highlighting the word 'Yes' too much , HZDS Vice-Chairwoman Oľga Keltošová said that her party believes it is "wasting money" to finance such a campaign.

In an even odder twist, on the campaign's fourth day, the HZDS officially renounced its airtime in favor of the SNS. No doubt indebted to their coalition mates, the SNS blitzkrieged TV screens with a pulsating 'Say No to NATO' spot.

During the entire three months between mid-February and mid-May, Mečiar never spoke out in favor or against NATO accession. Although Keltošová stated her party recommended that its faithful vote 'Yes' to membership, Mečiar never came out and supported the view.

Mečiar's silence on what was arguably this country's most important vote in its brief history became even more apparent during the official campaign. He avoided the issue altogether, instead choosing to chat about a proposed 50-percent energy price hike in the last of his regular appearances on Slovak Radio before the vote.

As the vote drew even closer, Mečiar was less and less available to make any kind of comment. The morning after Krajči ordered to print and distribute the three-question ballots, instead of helping his voters to orient themselves in the resultant chaos, Mečiar went to lay the cornerstone in the construction of a 14-kilometer-long highway in western Slovakia.

While on his highway mission, Mečiar avoided the NATO issue even when directly queried about it. "I can't [comment on it]. It would violate the law on moratorium," Mečiar answered, referring to the law that forbids giving an opinion 48 hours before a public vote.

"But I'm ready to answer the question after the vote," he said. Apparently, he wasn't. Upon leaving the polling station in Bratislava on Friday, Mečiar answered the question on how he had voted by saying: "It's none of your business," he told a cluster of journalists. "It's not my obligation as a voting citizen to answer, okay?"