After spending seven years on a sometimes bumpy road of integration into NATO, Slovakia may be taking a loop back. Now that Slovak Prime Minister Vladimír Mečiar believes his country has gotten a red light from NATO, he seems intent on shunting Slovakia onto a track with a green light although it leads to the country's red past.
At least that's what many opposition leaders see from Russian Premier Viktor Chernomyrdin's April 24-25 visit to Slovakia. "We are worried that [the visit] will be utilized by Mečiar's government to further accomplish the strategy of turning towards the East after the West clearly expressed that it doesn't want us," said Ivan Mikloš, vice-chairman of the Democratic Party. 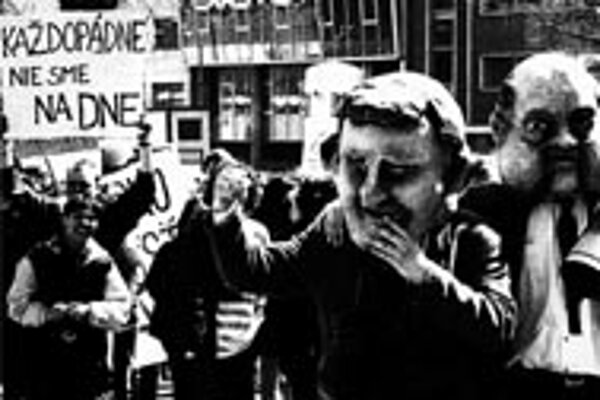 Font size:A-|A+0
After spending seven years on a sometimes bumpy road of integration into NATO, Slovakia may be taking a loop back. Now that Slovak Prime Minister Vladimír Mečiar believes his country has gotten a red light from NATO, he seems intent on shunting Slovakia onto a track with a green light although it leads to the country's red past.

At least that's what many opposition leaders see from Russian Premier Viktor Chernomyrdin's April 24-25 visit to Slovakia. "We are worried that [the visit] will be utilized by Mečiar's government to further accomplish the strategy of turning towards the East after the West clearly expressed that it doesn't want us," said Ivan Mikloš, vice-chairman of the Democratic Party.

On the other hand, Chernomyrdin sounded very satisfied with the direction the two countries' relations were heading. "I think we're moving in the right direction," he told a press conference after signing twelve bilateral deals with Slovakia. "We should be satisfied with what we have achieved. We agreed to develop military cooperation, as well as cooperation in the fields of nuclear energy and space research."

From among the twelve deals, ones such as the 'Treaty on Mutual Military and Technical Assistance worried observers in the opposition gallery about what direction the country is heading. The accord provides grounds for the future joint production of new conventional weaponry and the exchange of know-how and information about development of high-tech weaponry.

"We have nothing to hide," said Chernomyrdin, explaining the treaty's impact. "We know each other pretty well, we have worked together for many, many years. We focus on a lot of well-educated people working together and developing new weaponry. And once we develop it together, then we should use it together."

Apart from that statement, though, both leaders were mum on specifics. When asked directly about the military part of the pact, Chernomyrdin talked about his vision of realizing the military scientific potential and up-to-date technologies in civilian production. His minister for foreign business affairs, Mikhail Fradkov, said that this "information is confidential."

Igor Cibula, a former head of the Slovak Intelligence Service's (SIS) espionage department, expressed his concerns that Russia is trying to gradually renew its influence in central Europe which it lost after the iron curtain fell down. "The Russian Federation is getting back to the policy implemented by the former Soviet Union between 1945-1989, and is trying to restore the effectiveness of the Yalta agreements," Cibula stated. [NEED ONE SENTENCE ON WHAT YALTA WAS]

Cibula, who currently works as the opposition party Democratic Union's advisor on military and safety policy issues, also said that collection of Russia's debts in the form of armament supplies is not profitable for Slovakia, especially when the hardware isn't even being used by in the Russian Army. For instance, Russia has already supplied Slovakia with Kamov-50 helicopters designed for the Russian Navy which as yet have not been included in the Russian arsenal. The Russians preferred the improved version of the MiG-28 helicopter which they have been using for many years.

Also, the issue of these weapons' compatibility with NATO's is another open-ended question. "So far nothing is in our way, but it's clear that if Slovakia joins NATO, this kind of cooperation will become problematic," Sergej Zotov, Russia's ambassador to Slovakia, said as he evaluated the military treaty.

At the conference, Chernomyrdin also touched upon NATO expansion. After saying that the decision to join was an internal matter for Slovakia to decide, he emphatically added: "We're not scared of NATO, but we don't want it to expand... It [DEFINE WHAT IT IS] was enough. Enough!"

Chernomyrdin came to Slovakia after a brief visit to the neighboring Czech Republic and hosting Chinese leader Tiang Tse-min for five days. As Zotov pointed out, Chernomyrdin signed only two mutual agreements in the Czech Republic, none of which was politically oriented. He praised the fact that in Slovakia there was a dozen deals. "That in itself speaks volumes about our cooperation," Zotov said.

But former foreign minister and new chairman of the Democratic Union, Eduard Kukan, said the disparity in the number of signings in the two republics is anything but normal. "This visit displayed the interest of both countries to establish above-standard relations more than evidently," Kukan said.

Shortly before Chernomyrdin's visit, Zotov even stated that Russia was willing to guarantee Slovakia's neutrality if the country officially asked for it, honoring a request by Ján Slota, chairman of the far-right governing coalition member Slovak National Party, who asked Russia to support Slovakia's neutrality quest.

"In my opinion, Ambassador Zotov's initiative can be understood as abuse of his diplomatic status to a certain extent, and the Slovak Ministry of Foreign Affairs should react appropriately," Kukan stated.

If there is no reaction from the ministry, Kukan believes the next government's steps concerning the possibilities of neutrality should be kept under watchful control. "It is very irresponsible and dangerous and we should pay more attention to it," Kukan added.

Perhaps the biggest surprise was signing of the agreement on creating a joint venture between Slovak and Russian state-run monopoly gas companies, accompanied by a package of deals on gas supply until the 2008. The day before the treaty was signed, Ján Ducký, the head of Slovenský plynárenský priemysel (SPP), the Slovak monopoly, said that the deal was still in the works and that it won't be signed during the visit. "We will only sign an agreement about concluding such a treaty later on," Ducký said.

However, the deal indeed was signed. The impulse for signing it now may have been another gas-related agreement, namely the 'Agreement on long-term supply of Russian earth gas to the countries in Western Europe through the territory of the Slovak Republic'. Several weeks before the visit, Mečiar said that Russia is playing with the idea of building another gas pipeline westwards, and it is not sure yet, whether it will go through Slovakia's territory.

Wrapping up evaluation of the visit, Cibula concluded that Mečiar administration has almost completed the U-turn from West toward East. "Prime Minister Mečiar betrayed the program of his government by signing obligations which negate Slovakia's prospects of joining NATO," he claimed.