In a lone crusade pointing out what he says is corruption in the Slovak justice system, Slovak President Michal Kováč on April 17 publicly pistol-whipped the country's attorney general, Michal Vaľo, in a report alleging high-level obstruction of 26 unsolved Slovak criminal investigations.
Speaking at a press conference on the day the report was released, Kováč said the report documents every criminal investigation, in the young republic's history, in which key evidence supports the possibility that Slovak government officials had tampered with the legal process. Kováč furthermore laid the blame for any wrongdoing directly at the feet of the attorney general. 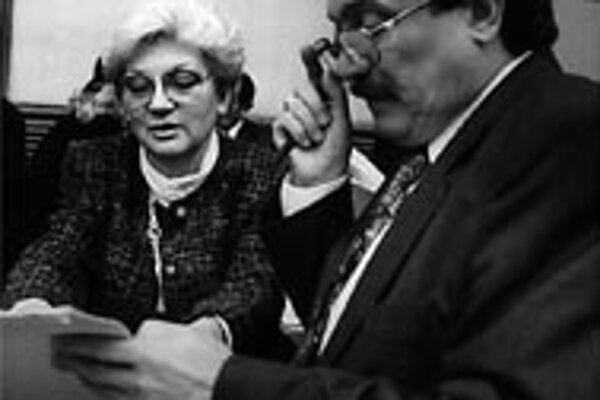 Font size:A-|A+0
In a lone crusade pointing out what he says is corruption in the Slovak justice system, Slovak President Michal Kováč on April 17 publicly pistol-whipped the country's attorney general, Michal Vaľo, in a report alleging high-level obstruction of 26 unsolved Slovak criminal investigations.

Speaking at a press conference on the day the report was released, Kováč said the report documents every criminal investigation, in the young republic's history, in which key evidence supports the possibility that Slovak government officials had tampered with the legal process. Kováč furthermore laid the blame for any wrongdoing directly at the feet of the attorney general.

"How the rule of law is enforced in a country can only be measured by the extent to which [the perpetrators of all] crimes are unmasked," Kováč said, "regardless of whether organizations or individuals, senior state representatives or state bodies committed [those crimes]. The fact that the amount of such cases is growing, evokes concern at a time when political interests mean more than laws and their protection."

Kováč's statements were a stinging attack on the government and may be designed to show that the country was not meeting basic admission criteria such as "respect for the rule of law" espoused by the European Union (EU). The timing of the president's report was curious, as Slovakia awaits impending deadlines on whether it will be invited to join NATO and the EU.

Among the unsolved cases the report lists are, the kidnap of Kováč's son, Michal Kováč, Jr., in 1995, the publication of the Democratic Union's electoral petition sheets that same year, the controversial sale of a religious painting called "The Three Kings" in Banská Bystrica, the alleged tape recording of a telephone conversation between the former Interior Minister, Ľudovít Hudek, and the Director of the Slovak Intelligence Service, Ivan Lexa, and questionable circumstances surrounding the privatization of state enterprises such as Nafta Gbely, Skloobal Nemsová, Bardejovské Kúpele, Piešťanské Kúpele, and others.

Responding immediately and venomously to the president's accusation, Vaľo levelled a double-bareled blast at the president during his own April 17 press conference, eviscerating Kováč for having "neither the constitutional nor the moral right to take the course he has chosen," and charging the president with having sought to erode the public's trust in the legal process by "reinforcing to Slovaks that they must obtain justice. . . for bomb-attacks by hiring blackmailers and cutthroats, because. . . the attorney general's office is passive."

"In a democratic society that respects the rule of law, the president should really consider resigning after such an attack," Vaľo continued. "In such a country it is unthinkable that the president, on the basis of newspaper articles and unofficial sources, and without any consultation with the attorney general, should distribute such a report around the country. President Kováč has shown not only a lack of elementary decency and tact, but a total lack of responsibility, respect for the law and the willingness to interpret facts so that they would not harm the authority of another state body."

Kováč's spokesman, Vladimír Štefko, denied that the president was out for personal benefit through the report. "The primary reason [for producing the report] was not to attract attention to himself or to make a big noise," Štefko told The Slovak Spectator, "but to contribute to a solution by formulating the issue."

Responding to Vaľo's argument that the public debate has served rather to undermine the nation's faith in its legal custodians, Štefko pointed the attorney general's accusation back to its source. "Mr. Vaľo's logic is very unusual," Štefko said. "The public's trust is not undermined by the president's report, but by the fact that there are so many unsolved cases. If these cases had been carefully investigated, the president would not have to resort to this action."

Štefko said that the odds that Vaľo and others would bring the investigations the report cites to a conclusion are not high."So many of these cases have a political background," Štefko said. "There are many people who don't want these cases investigated. The main reason why the president addressed Mr. Vaľo is that he believes the attorney general has the moral and constitutional responsibility [for correcting this situation], because the president himself approved Mr. Vaľo in his position on the basis of the government's suggestion."

Asked if the report's release was timed to draw attention to the gap perceived by Western leaders between Slovakia's adhesion to democratic principles and its practice thereof, Štefko conceded it wouldn't help. "The fact that these problems are not discussed will not help us enter the EU or NATO." Štefko said. "Because EU leaders have issued so many demarchés directly addressing the problems which the president's report identifies, it shows they understand the problem. The president thinks these cases diminish the chances for our country to enter those institutions."

lending urgency to what top officials of both organizations have repeatedly told the government it must do to meet such to the attorney general's office and district prosecutors, Interior Minister Gustav Krajci, chief justices of the Supreme and Constitutional Courts, and to the heads of Slovakia's political parties, Štefko denied that Kováč's report was a "last gasp" perhaps undertaken in view of the possible consequences of the government's cancellation of this month's public referendum on direct presidential elections. "I wouldn't relate this question to the referendum. The president is convinced that it is necessary to identify all violations of democracy. It doesn't matter if there's a referendum or not; this is what the president feels is his responsibility."

"Much of what has been said by Mr. Vaľo and the people around him has confused the cause and its result," Štefko continued. "Apparently, if there exists a real problem, the guilty one is the man who is speaking about these problems, not the one who caused the problem. This issue is a precise example of this."