Alarmed by last year's 49.5 billion Sk ($1.5 billion) trade deficit with Russia, the Slovak government is seeking the means to swing to the opposite side of the trade balance pendulum. However, after European Commission Vice-President Sir Leon Brittan placed a "Wrong Way" sign onto the entrance ramp toward a Slovak-Russian free trade highway, the search for the right vehicles continues.
In 1996, Slovakia's trade balance with Russia marked the worst development among all its trading partners (see graph below). Exports to Russia dropped by 4.1 percent, while imports increased by 36.8 percent, deepening Slovakia's trade deficit with Russia from 33.5 billion crowns in 1995 to 49.8 billion a year later. 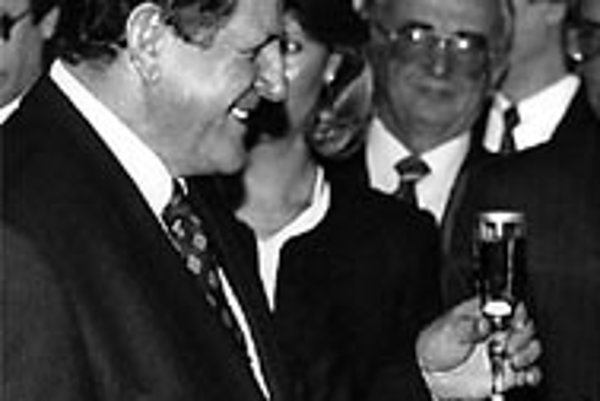 Font size:A-|A+0
Alarmed by last year's 49.5 billion Sk ($1.5 billion) trade deficit with Russia, the Slovak government is seeking the means to swing to the opposite side of the trade balance pendulum. However, after European Commission Vice-President Sir Leon Brittan placed a "Wrong Way" sign onto the entrance ramp toward a Slovak-Russian free trade highway, the search for the right vehicles continues.

In 1996, Slovakia's trade balance with Russia marked the worst development among all its trading partners (see graph below). Exports to Russia dropped by 4.1 percent, while imports increased by 36.8 percent, deepening Slovakia's trade deficit with Russia from 33.5 billion crowns in 1995 to 49.8 billion a year later.

That may be about to change, as Russian Premier Viktor Chernomyrdin is scheduled to visit Bratislava on April 28-29 for talks with Mečiar and other government officials that almost certainly will touch upon Slovak-Russian trade.

"I think that questions about the economy will surely be on the schedule," said Ľudmila Buláková, the government spokeswoman. "Always when two prime ministers meet, they have a lot of discussion about economic matters."

While stating that Slovakia is in an excellent position to have greater trade volume with Russia, Ján Foltín, state secretary at the Ministry of Economy, quoted Russia's recession as the main factor for the current situation. "We know the mentality of the [Russian] people," Foltín said, "but we are still unable to increase our exports for many reasons, chiefly the deep economic recession in Russia. Before the [Russian] economy grows again, I think it will be very difficult to penetrate. The risks [for our investors there] are high."

Foltín continued that while Slovak business opportunities in Russia are fraught with high risks due to Russia's economic and social unrest, Russia's "high educational level" and "huge natural and human resources" make it a logical high-volume trade partner for a country whose own export sector was largely established to service the former Soviet economy.

Unfortunately, that was a two-way street. Not only were Slovakia's exports designed for the Russian market, but also its imports were coming almost exclusively from Russia to feed that market back. That dependence has stayed very much intact, and is deepening.

According to an analysis prepared in March by the Ministry of Economy, "the increasingly negative trade balance with Russia creates a complex of trade dependence that affects also other areas." The analysis predicts that finding a solution will not be easy, since Slovakia desperately needs raw materials and energy resources for its own economic development. Diversifying its imports would require investments Slovakia can't afford at this time. For instance, within the next 10 years, the country cannot count on any oil supplies other than the Družba pipeline from Russia, the analysis stated.

Perhaps this dependence made it easier for some of Slovakia's ruling economists to play with the idea of a free trade zone between the two countries. Prime Minister Vladimír Mečiar has mentioned this possibility several times, seeming to believe that any free trade agreement Slovakia concludes is advantageous, since its customs protection is very low. "With an average 5 percent tariff rate, Slovakia has the lowest custom protection in Europe," Mečiar said.

But the economic ministry's analysis deemed the premier's solution "not very realistic, because it contradicts the conditions and rules agreed upon within the framework of the EU, CEFTA [Central European Free Trade Association] and customs union with the Czech Republic."

While appreciating Mečiar's vision, Foltín defended his ministry's analysis. "If we had a free trade agreement with Russia, I think it would be excellent," he said. "It's a very valuable market, and I still believe it will grow sooner or later. Of course, if we did establish such an agreement... it would have implications for our Czech partners and the EU."

To make that point very clear, the EC's Brittan warned Slovakia during his March 21 visit that the EU will not tolerate a Slovak-Russian free trade agreement, adding that Slovakia must renounce any such agreement if it joins the EU.

Foltín, very much aware of this fact, added that concluding such an agreement is not in Russia's interest, either. "It's not possible for Russia to give preferential [tariff] rates to Slovakia, because if Slovakia entered the EU they would have to lower their import tariffs for all other EU members as well," he said.

According to Anna Joštiaková, head of the trade policy department at the Economy Ministry, an agreement on a free trade zone with Russia would not even be lucrative enough. She said that at present, the average tariff rate on goods imported to Slovakia from Russia is 0.5 percent, while Slovak goods exported to Russia are subject to a 16 percent tariff on average. That means if Slovak exports - now worth some 9.5 billion Sk annually - get cheaper by 16 percent as a result of dismantling tariffs, they would potentially increase by only about 1.5 billion Sk.

To achieve this, Slovakia doesn't even need a free trade zone, Joštiaková continued. "Similar effects could be reached during negotiations over Russia's admittance into the World Trade Organisation, where Slovakia can bring up its own requirements to liberalize mutual trade," she said.

Before that happens, it seems Slovakia can kiss goodnight to all its plans for lowering tariffs in trade with Russia. For now, Foltín said, Slovak-Russian trade negotiations are focusing on small but concrete, pragmatic issues to help improve mutual trade. "We are talking mainly about non-tariff barriers," he explained. "[For instance], Russia requires safety certification of imported goods such as food and electrical products before they can enter the country. We would [therefore] like for Russia to have its certification branch here, so that Slovak trading partners can be certified here instead of in Russia."

This pragmatism appears to be mutual. In March, the Slovak government approved a project to establish consignee warehouses and centers for trade, marketing and technology on Russian soil.

According to the minister of the economy Karol Česnek, this project should remedy the lack of market outlets that used to be concentrated prevailingly in the Czech Republic in the form of foreign trade companies. The building of warehouses and marketing centers is expected to particularly enhance the trading activities of small and medium-size businesses that do not have enough money and information to build their own marketing outlets in the Russian Federation and the Commonwealth of Independent States (CIS).

The centers will focus on marketing and creating a network of shops offering sample products. They are designed to support sales of machinery products and technologies; furniture; sanitary hardware; construction materials and technologies; chemical and pharmaceutical products; plastic materials; shoes, textiles and clothes.

Česnek said the Foreign Trade Support Fund, created by the cabinet with state monies to promote exports, will inject the cash into the project, while the Economy Ministry will supply the know-how.

The ministry's analysis mentioned yet another measure to help the plan: establishment of a Slovak-Russian bank licensed and registered for universal banking operations in the Russian Federation, and designed to smooth payments between Slovak entrepreneurs and businesses throughout the CIS.