The long-running dispute between Slovakia and Hungary over the completion of the Gabčíkovo-Nagymaros Danube River dam project has entered the final stretch towards resolution before the International Court of Justice in The Hague.
While the Hungarian legal delegation batted first in the oral round of their week-long proceeding which started March 3, the Slovaks are cooling their heels until March 24 to argue their side of the case. The Court's ruling, expected this fall, is binding and final for both countries.
The case concerns the disputed history of the Danube River's diversion by a dam and power plant project launched twenty years ago this fall, bound by a treaty between the Czechoslovak and Hungarian governments to build two dams between the Slovak village of Gabčíkovo and the Hungarian town of Nagymaros. 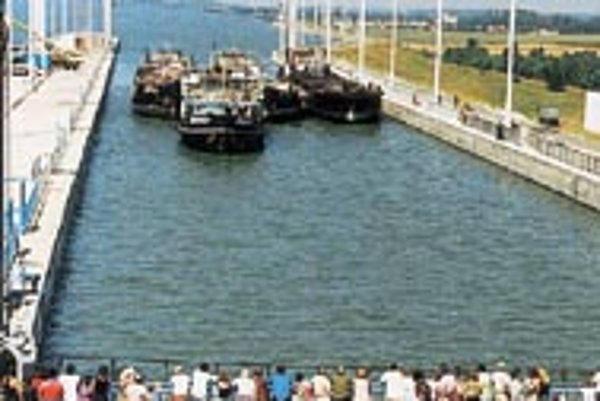 Font size:A-|A+0
The long-running dispute between Slovakia and Hungary over the completion of the Gabčíkovo-Nagymaros Danube River dam project has entered the final stretch towards resolution before the International Court of Justice in The Hague.

While the Hungarian legal delegation batted first in the oral round of their week-long proceeding which started March 3, the Slovaks are cooling their heels until March 24 to argue their side of the case. The Court's ruling, expected this fall, is binding and final for both countries.

The case concerns the disputed history of the Danube River's diversion by a dam and power plant project launched twenty years ago this fall, bound by a treaty between the Czechoslovak and Hungarian governments to build two dams between the Slovak village of Gabčíkovo and the Hungarian town of Nagymaros.

The 1977 agreement sought to provide both countries with a common source of hydroelectric power, but foundered on the reefs of financial, legal and environmental conflicts between the two nations.

While the Slovaks forged ahead with their side of the project at Gabčíkovo, the second dam was never built because Hungary halted construction on Nagymaros in 1989.

As the Slovak legal team prepares to present its oral arguments in the case, its lead attorney, Peter Tomka, gave an insightful glimpse what the Slovak side will say. "Our arguments will address four issues," Tomka said. "First, whether Hungary was entitled to suspend the construction of Nagymaros; second, whether Hungary was entitled to suspend the construction of Gabčíkovo; third, what are the legal effects of Hungary's decision to terminate the 1977 treaty, or in other words whether or not that treaty is still in force; and fourth, whether Czechoslovakia was entitled to put Gabčíkovo into operation through the Variant C [the diversion plan to which Slovakia resorted to complete its section of the project] in October 1992."

"Of course, we must present the facts," Tomka continued. "This includes scientific studies made both before and during the construction of the project. There is no data justifying Hungary's suspension of the project - specifically the suspension of the Nagymaros project. We will argue furthermore that Hungary was not entitled to abandon works on the section of the canal from the hydroelectric power plant at Gabčíkovo to the Danube, and we have developed a legal argument also concerning Hungary's termination of the treaty unilaterally, which we argue Hungary had no right to do."

The Hungarian side was less loquacious on what their legal platform would be, but György Szénási, Hungary's chief attorney in the case, indicated that his team is arguing more from an environmental than a legal standpoint. "This is a very complicated matter from the viewpoint of heavy scientific elements and somewhat less heavy legal elements," Szénási told The Slovak Spectator.

Asked if that meant the Hungarians are basing the greater part of their presentation on environmental data, Szénási qualified his own comment. "I would say there is a fair mixture," he said. "We must give evidence of a legal as well as scientific character to justify the legal steps Hungary will urge the Court to take, and that is exactly what we are doing now."

How the trial has gone

According to one Slovak official who has closely followed the trial, the Hungarian legal eagles have needed to explain their main arguments. "The Hungarian side has concentrated on proving that Variant C was illegal, but two of the judges had very unpleasant questions [for an expert witness produced by Hungary] who compared the Danube River's condition to that of the Rhine [River, in Germany], and argued that the Rhine's water is now polluted partly because of the construction of hydropower projects," relayed Miroslav Liška, the chief of public relations at Vodohospodárska Výstavba, the state-owned hydroelectric engineering firm which completed the Slovak section of the project at Gabčíkovo in 1992. "Judge [NEED FIRST NAME HERE AND COUNTRY REPRESENTS] Fleischauer asked this expert how this is possible given his assessment that so much of the Rhine today is drinkable, and that area is so heavily populated."

Another sticky question, Liška said, was put by a Russian judge in reference to Hungary's November 11, 1989, proposal to complete the project without the Nagymaros section. "Why, asked the judge, had the Hungarian side not modified this proposal to make it more acceptable to the Czechoslovak side," Liška paraphrased the judge as asking. "When I heard these questions, I was convinced that the judges understand the case."

According to Liška, the Hungarians argue that the original agreement contained the potential for an environmental catastrophe. "Of course, we have quite a different opinion," Liška said. "Because of the Hungarian Parliament's decision [from October 1992] not to cooperate [in completing the project], Hungary has in effect preserved the damages it now argues the project has caused, and has practically created to a large extent the damages which in fact could have been prevented through their cooperation in the project, according to which the Danube's water-level would not have fallen."

While both chief lawyers said the proceedings have been "serious," they differed on whether the case has gone according to form. "This will not be an O.J. Simpson trial. There will be no last-minute witnesses," Szénási said. "There have not been, nor will there be any surprises."

Tomka said, though, his country had already shocked the court by bringing in additional evidence. "The Court accepted the Slovak side's request to produce as evidence two additional documents - meaning that we can use them for our oral arguments," Tomka said. "One of these is titled 'The Trans-Danubia Report,'" he explained. "This was prepared by Danish experts and funded by the Phare Foundation. The Phare report was not available at the closure of written proceedings, which is why we asked for it to be included as evidence now. The other legal document, dating to 1984, is based on the Planning Plenipotentiary's bio-project, which was completed in 1976 before construction began."

Tomka added the Hungarian side was "not happy with the production of these documents and raised objections, but the Court . . . gave the Hungarian side the opportunity to present written observations of the methodology and conclusions" rendered in each of the reports.

According to Liška, another point which the Hungarians made in court is that the original treaty represents a holdover from the Cold War.

"It's very interesting that Hungary's present view is that the treaty originally signed by both [Czechoslovakia and Hungary] was not in Hungary's economic interests, [and that] it originally served to promote the COMECON [former trade bloc] agreement among socialist countries," Liška said. "In other words, the whole treaty has no significance anymore."

"Every such treaty had a preamble in which there was always some nice talk of improving relations among socialist nations and so on," Liška said. "But this was only a formality. However, Hungary wants to makes it seem that this preamble was the aim of the treaty, [and that] it was signed under Soviet pressure."

On April 1-3, Court representatives will make an on-site visit to the Slovak and Hungarian sections of the project, the first such visit in the institution's history. After that, Hungary will present its oral arguments in the second and final round on April 10-11, while Slovakia will conclude the last inning on April 14-15. The entire hearing will end after that, with the Court embarking on the last phase of the case: producing a verdict.

The pleading of the Hungarians is mostly based on their argument that Slovakia wanted for a long time to control the Danube," said Miroslav Liška, the chief of public relations at Vodohospodárska Výstavba, the state-owned hydraulic engineering firm which completed the Slovak section of the project at Gabčíkovo in 1992.

"The Hungarians argue that Slovakia used the opportunity when there was disagreement [about the project] to deviate the Danube onto Hungary's territory, and that therefore Hungary had no altrnative but to end their participation in the project."

"This is based on the supposition that the original project was invalid from the beginning," Liška continued, "Because of [the original plan's] negative impact even before 'Variant C' was implemented. It means the Hungarian side does not concede the necessity [recognized mutually in the 1977 treaty] to prevent the chronic flooding of the region."

Asked if Slovakia will argue from a broader context, Tomka said, "We will deal with scientific and technical aspects only to the extent which is really neceesary, to the extent that one must draw legal conclusions from scientific arguments. We hope and expect that the Court's judgement will be based on objective consideration of legal and scientific evidence."

"Hungary wants above all to abolish the treaty," Liška continued. "So everything they are now saying about the environment was constructed, because already Hungary's offer to finish the project shows that their fear of a catastrophe was not founded on real data. They had no more data about this in fact than we did. They decided first to abolish the treaty, and then did everything they could to back up their decision with environmental data" collected for that purpose.

Addressing Hungary's lack of funds for the project, Liška admitted that Czechoslovakia's financial position was more favorable from the outset than its partner's.

"We did all the construction [on the Slovak system] ourselves," Liška said, "while the Hungarians had to hire out Austrian and Yugoslavian labor for their part of the project [at Nagymoros]. It means they had to pay the equivalent of 1.2 billion kilowatt hours for twenty years just to pay off the Austrian construction firm that constructed the project. . . Under such conditions, of course is its much less efficient than when you are building from your own capacities."