In the plush offices of the National Bank of Slovakia (NBS), Governor Vladimír Masár sat down with News and Business Editor Daniel Borský and Managing Editor Daniel J. Stoll to discuss the latest developments in Slovakia's banking and finance sector. This is the first of a two-part series The Slovak Spectator will run from the interview.
In the first past excerpted below, Masár discusses the cabinet's role in bank policy and the NBS's independence. In The Slovak Spectator's next issue (March 29), Masár will address fears of an imminent devaluation of the Slovak crown and the widening budget deficit. 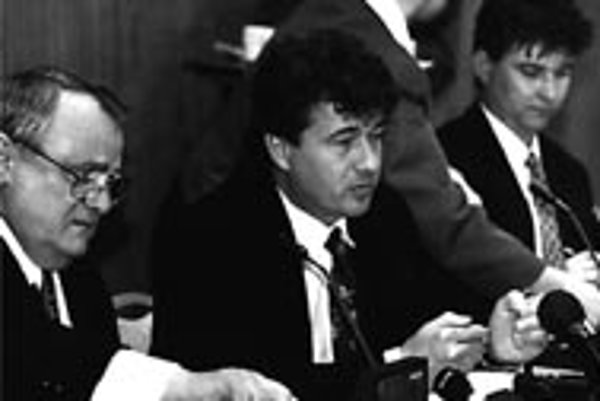 Font size:A-|A+0
In the plush offices of the National Bank of Slovakia (NBS), Governor Vladimír Masár sat down with News and Business Editor Daniel Borský and Managing Editor Daniel J. Stoll to discuss the latest developments in Slovakia's banking and finance sector. This is the first of a two-part series The Slovak Spectator will run from the interview.

In the first past excerpted below, Masár discusses the cabinet's role in bank policy and the NBS's independence. In The Slovak Spectator's next issue (March 29), Masár will address fears of an imminent devaluation of the Slovak crown and the widening budget deficit.

On the cabinet's role

The Slovak Spectator (TSS): What is the role of Finance Minister Sergei Kozlík in the Bank Board of the NBS? Note: The NBS Bank Board has seven members which decide bank policy.

TSS: What does an advisory vote mean?

Masár: An advisory vote means that it does not count when voting takes place. That means (Kozlík) can give his opinion, can present his arguments in a discussion, but cannot actually vote. I also present my position over certain issues during the government sessions, I can argue against the opinion of the government members, but when it comes to voting, my opinion may be considered, but I cannot vote.

TSS: Why did you decide to appoint new members to the Bank Board?

Masár: The term of office of one of the members ended December 31, 1996. Another Bank Council member died in early 1996, and there were only five of us left. In case of business trips or possible illness we would not be able to make decisions. I myself insisted new Bank Board members be appointed.

The first one we have agreed upon was the government's candidate, the prime minister had suggested Mr. Magula and I later agreed. The second candidate is still being discussed, it should be a person of my choice.

TSS: Who do you think that should be?

Masár: I suggested Mr. [Tibor] Kašiak (currently NBS's commercial banks' supervisor), but we still are going over other alternatives. I proposed Mr. Kašiak because I believe that since overseeing banks is the NBS's priority, a bank supervisor should be represented on the Bank Board.

TSS: By law, it is the NBS governor who proposes Bank Board members. You did not have to choose Mr. Magula. Why did you suggest him?

Masár: Because he was the government's candidate, or the prime minister's candidate, and we agreed upon this person.

TSS: Considering his activities as deputy minister of finance, do you consider Mr. Magula acceptable for the Bank Board post? Do you consider him competent?

Masár: Look, I proposed him, which means I find him acceptable.

TSS: Was there any pressure?

Masár: The prime minister and I had a very open discussion about Mr. Magula. I know Mr. Magula from the time when I had worked as a deputy minister of finance. Back then, Mr. Magula had been my subordinate. Of course we watched his activities at the finance ministry, we know which of his moves the public perceived as positive, and we know about his decisions the public considered to be negative. I spoke with Mr. Magula about his good and bad sides very openly. I believe he was fully aware of his situation.

TSS: Do you think that by Mr. Magula's nomination, the government has infringed on NBS independence?

Masár: In the first place, the word "independence" is sort of disputable. I relate the NBS's independence to its professionalism. If a central bank is a highly respected professional institution due to its monetary policy, banking supervision, etc. It does guarantee the bank a reasonable amount of independence.

The sovereignity we have enjoyed since we were created as an institution has been shown through our high professionality. In a relatively short period of time we have managed to handle quite difficult tasks. We can say the NBS has joined its counterparts. This I believe happened because the Bank Council was set up only from NBS professionals.

Yet, on the other hand, it is natural that some institutions have different ideas about how the NBS should operate and want to use the existing legislation to influence its activities. I would be happiest if independence of the NBS remained - supported by the Bank Board now set-up. But there are other opinions and by law, I must respect them. I look at it that I had some time - let's say four years - to build this bank with only people from this bank. And now there are certain pressures. Someone wants to let me know that he too has the right to decide over the direction of such important matters as the monetary policy and overseeing all the banks.

TSS: Nominations of people for NBS posts from the cabinet has shaken investors' trust. How can the bank renew this trust?

Masár: I hope we do not have to speak of renewing trust, I think we are still trusted. Trust should stay as long as we keep up our transparent policy. Investors must see there are no political turbulences, no radical changes; and that we are carrying out the monetary policy we started in 1993.

Our main goal for any year is a monetary program. It is somewhat atypical for a central bank to declare its annual monetary program. But we want to show what we aim to achieve in monetary development in a given year. The attitude of the NBS shows that our opinion does not change with an appoinment of a new member.

TSS: To what extent are you worried that economic policy will be decided by the whims of politics?

A full table is good for everyone, an empty table feeds no one. There is a close connection between the government's economic policy and a monetary policy of the NBS. That means bad economic development will eventually cause problems for the monetary system. Likewise, a bad monetary policy in the end is inevitably reflected in real economic problems. It should be our goal to find a compromise andhave the economy be towed in one direction by both (government and the NBS). We can't see the situation as a competition and wait to see who wins, the government or the NBS. There would be no winner. Here, either both win or both lose.

At the end of 1996, the difference between the goals of the monetary and economic policies was significant. It's important that we succeed in uniting over what should be done about the main problems of the Slovak economy's development., e.g. the country's trade deficit. Both the NBS and the government agree that this is the basic problem we should focus on in 1997.

Trust should stay as long as we keep up our transparent policy. Investors must see there is no political turbulence, no radical changes, and that we are carrying out the monetary policy we started in 1993.

Now there are certain pressures. Someone wants to let me know that he too has the right to decide over the direction of such important matters as the monetary policy and overseeing all the banks.

Appointed by President Michal Kováč as governor of the National Bank of Slovakia (NBS) on July 29, 1993. Term ends in 1999.

Appointed State Secretary at the Ministry of Finance - September, 1992. That same year, appointed chairman of the preparation committee for establishing the NBS.

Worked at a Bratislava branch office of the Czechoslovak State Bank: 1981 - 1989.

Graduated with a degree from the financial department of the faculty of national economy, Economic University, Bratislava: 1981.