Improve efficiency at home or submit to foreign capital

Slovakia's impressive macroeconomic performance in 1996 was maintained at the expense of the trade balance sinking into depths that appeared abysmal. Premier Vladimír Mečiar's most complicated economic puzzle for 1997 therefore will be to decide whether to adopt systematic measures to improve efficiency at home or leave the country at the mercy of foreign capital inflow.
"Despite GDP growth being the same as a year ago, its structure has changed," said Juraj Renčko from the Forecasting Department at the Slovak Academy of Sciences. "On the one hand, both production of gross fixed capital and public consumption have increased. On the other hand, our net exports have collapsed. The result was that GDP growth was carried by domestic demand instead of foreign one. Simply put, the liquidity exported abroad through imports had to be brought back via loans." 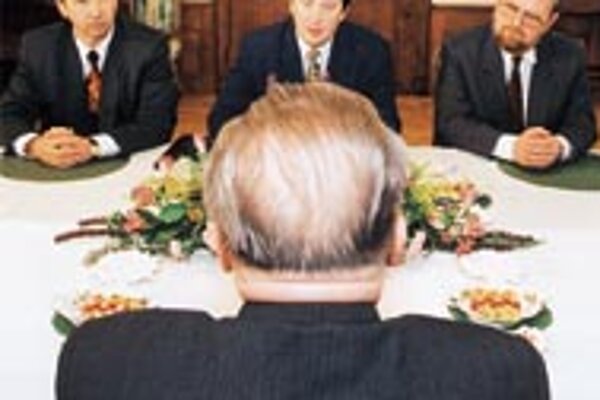 Font size:A-|A+0
Slovakia's impressive macroeconomic performance in 1996 was maintained at the expense of the trade balance sinking into depths that appeared abysmal. Premier Vladimír Mečiar's most complicated economic puzzle for 1997 therefore will be to decide whether to adopt systematic measures to improve efficiency at home or leave the country at the mercy of foreign capital inflow.

"Despite GDP growth being the same as a year ago, its structure has changed," said Juraj Renčko from the Forecasting Department at the Slovak Academy of Sciences. "On the one hand, both production of gross fixed capital and public consumption have increased. On the other hand, our net exports have collapsed. The result was that GDP growth was carried by domestic demand instead of foreign one. Simply put, the liquidity exported abroad through imports had to be brought back via loans."

The premier's economic advisor, Peter Staněk, the male part of Mečiar's binary economic brain, maintains that there is enough capital at home, if only Slovakia knew how to take advantage of it.

"The cardinal question is," Staněk said, "whether we will make the most out of existing capital by increasing its value, or will we cover the inefficiency at home by foreign loans?"

Staněk continued that giving birth to efficiency will only be possible through a vivisection of the structure of Slovak businesses. In his model, there are three groups of companies operating in the country today: 20 percent of them are successfully growing into supranational corporations, while another 20 percent must be declared bankrupt.

"The problem is those 60 percent of companies that are profitable, but not [profitable] enough to pay off all the types of loans they have drawn," Staněk said. He added that these 60 percent can be broken down again into three groups. "Here we have to say clearly: these companies are able to revitalize; those we can try but if they don't do well after one year, they must be gone; and the third group cannot be revitalized and must join those hopeless ones. If we can do this, you would be surprised, but in Slovakia there will suddenly be too much domestic capital for too few projects with sufficient cash flow."

The poor economic performance of numerous Slovak businesses continues to burden country's banking sector by loans that are often impossible to reclaim. Altogether, bad loans in the whole banking sector amount to 90 billion crowns, out of which only 23 billion are loans from before 1990.

The banks are throwing the hot potato into entrepreneurs' hands, keeping interest rates between 15-20 percent, although the central bank's discount rate has gradually declined from 12 to 8.8 percent over the past two years.

This perhaps overcautious banks' policy only added to the weight the businesses had been choking under before, that is, the state's tax system. "In the present situation, when the banking sector mercilessly demands that [businesses] pay all their loans - past loans, privatization and operational loans - you have to reach trade margin at about 40-50 percent," Staněk said. "Even the best Japanese corporations don't reach this margin. The realistic margin is between 15-20 at most."

When the government liberalized the payment balance's current account in October 1995, for some time it seemed that the banks will find their way to prevent economic activity coming to a halt. "The move made it easier for commercial banks to get their hands on foreign loans that they redistributed to domestic entrepreneurs," Renčko said. "That was the main reason for the dynamic increase of money supply."

In the course of 1996, the M2 indicator that shows the volume of money in the economy, has touched a 20 percent increase rate on year-to-year basis. That's when the National Bank stepped in. It ordered the banks to increase their mandatory minimum reserves, cutting back the amount of money flowing around by 26 billion crowns.

Staněk believes that was an unfortunate decision. "Siphoning off surplus liquidity enabled us on one hand to get inflation down to 5.4 percent, but on the other hand it also anaesthetized a significant amount of resources that could have been used for loans in the domestic business sector."

But in his interview for Pravda daily, NBS vice-governor Marián Jusko maintained that Slovakia's economy is overheating and the preventive measures were necessary. "According to preliminary statistics, the volume of domestic loans has risen by more than 60 billion Sk in total, with volume of loans to businesses and residents rising by more than 50 billion Sk," Jusko said. "We have to make sure that the economy's rapid growth doesn't bring future problems. Today we have to remember that at some point in the future we will have to pay off these loans."

Staněk agreed that the economy may be loading its shoulders with more weight than it can withstand. He pointed out that there is a 27 billion Sk budget deficit left over from 1996, a 37 billion Sk projected deficit for 1997 and 8 billion Sk allocated for development projects, such as highway construction, public housing or the new EXIM Bank. "That alone makes an over 70 billionSk debt that is expected to be covered in 1997 by issuing treasury bills and government bonds," Staněk said.

If the bills and bonds are placed on the domestic market only, Staněk continued, the banking sector will not have enough liquidity to buy them all, even if banks' disposable capital will rise. And even if banks do have enough liquidity to buy the bonds, they won't have any credit left for the business sector. "That's why I warned emphatically that we should not exceed the critical budget deficit limit of 25 billion Sk," Staněk said.

However, Staněk's concerns seem to be falling on deaf ears. The budget deficit is projected at 37 billion Sk, and for the first time since 1993, the budget can be described as expansive. "In 1994-1996 there were noticeable efforts to minimize budget deficits," Renčko said. "In 1997, however, there is an evident drift towards an expansive fiscal policy that shows efforts to bring into economy development impulses through the state budget." According to Renčko, expansive fiscal policy will mean - regarding the economy's extreme vulnerability to imports - restrictive NBS monetary policy, which will limit the private sector through rising interest rates.

That would also have an impact on the debt service. "If the debt service continued under current interest rates, we would be running the risk of this service becoming so expensive that it would endanger real budget income for years to come," Staněk said. "It even might become a serious long-term risk, since paying off the loans from the IMF, World Bank and EBRD will reach its zenith in 1998-1999."

Staněk is a strong advocate of systematic solutions, for he believes that the economy is so interconnected that partial solutions lead nowhere. "Let me give you an example," he said. "The Ministry of Defense annually spends 3 billion Sk to buy arms. Let's imagine that you would use this money on revitalizing part of our engineering industry. At the same time, the banking sector would agree to allow [debtors] to skip payments, and the Ministry of Finance would simultaneously agree on temporarily halting sanctions for late taxes. At the same time the government would use its official possibilities for lobbying."

"If you could do all this," Staněk continued, "you will be able to revitalize parts of our industrial production, so before the end of this year these enterprises will produce gains instead of losses. Therefore they can begin paying off their loans to banking sector that can consequently loan out to smaller businesses. It could be done in a way that you would see positive results before the end of 1997."

Then, as if by a crack of a whip, Staněk defined perhaps the most serious problem of the Slovak economy. "If the NBS declares that it cares about nothing else but inflation and the M2 aggregate, the banks say they care about nothing else but their bad loan portfolios, and enterprises say that they see no reason to enter new markets if all their gains are swallowed by back loan payments to banks and taxes to the state, then it's all bullshit."